It’s no news that the AK is a hugely popular platform. It’s mechanically simple, easy to maintain, and easy to use. There’s a reason it’s one of the most widely used platforms across the world. They just work. And, of course, you want mags for your Kalash blaster with the same kind of performance. That’s why Jeremy took ten popular AK mags out to the range for some testing. How well do the mags hold out to the testing? Watch this to find out.

It’s a Kalash kind of day, and we’re taking a look at the durability of ten popular 30-round AK-47 magazines. These mags are each suject to a drop test, being dropped from about shoulder-height onto hard-packed range dirt, fully loaded. After that, they’re subjected to a full-auto magazine dump.

Jeremy says, “There’s really only two things I need from an AK mag”

We’ll let the results speak for themselves.

The first magazine Jeremy tests is a ProMag steel lined model. The polymer case has stippled texture on both sides and ribs on the back, with steel reinforcement at the feed lips and a steel locking lug.

Jeremy looks closely at the lug and notes that it’s basically steel wrapped, so not a full-steel lug. 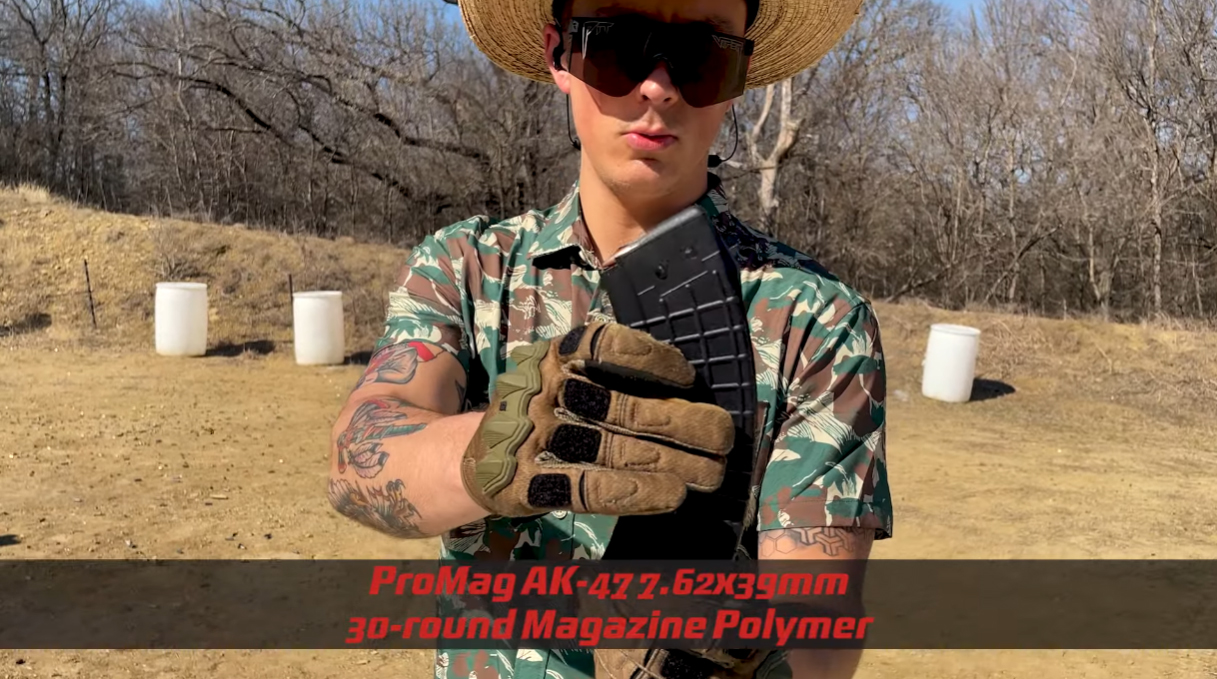 This slick, smooth Bulgarian AK mag is steel reinforced, not steel lined, with reinforced feed lips and locking lug at the back.

These mag dumps make Jeremy smile and chuckle, “Man, AKs are fun! Tell you what, gettin’ better too!” 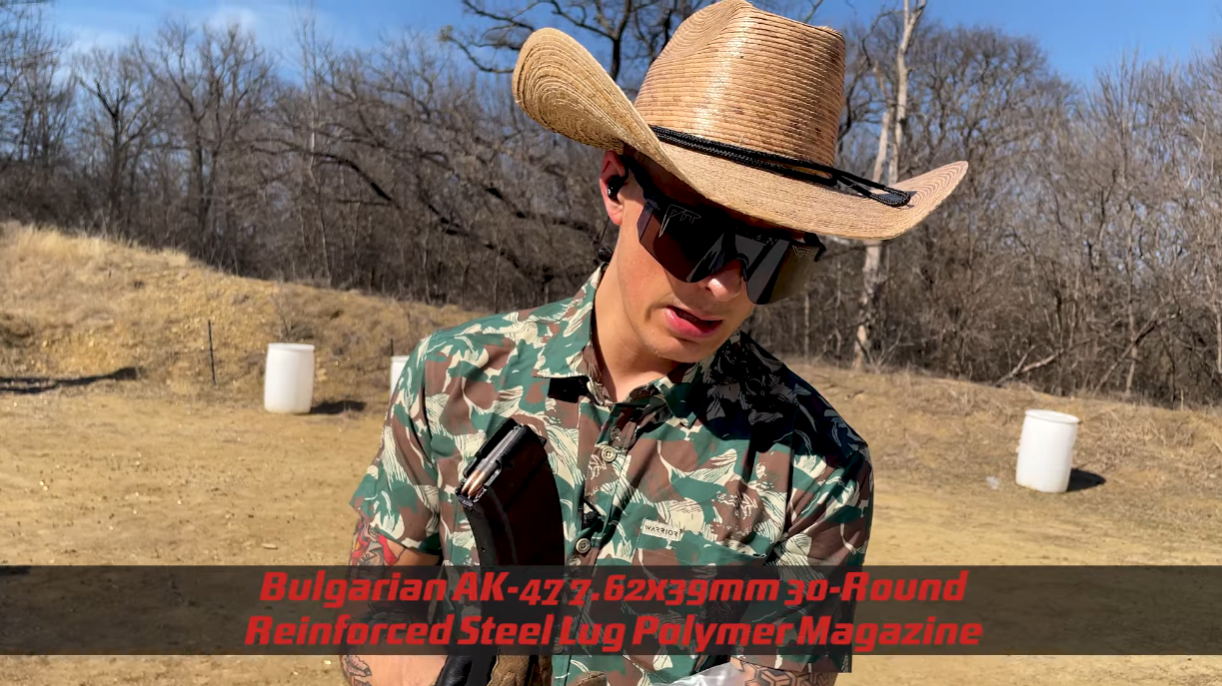 This one is similar to the reinforced one just tested, but instead of having the steel only at the top, the whole thing is steel lined with a polymer wrap. It also has a steel baseplate down at the bottom. and this one comes in brown. Drop test, passed, no problem. Does it handle the full-auto Kalash blast? Beautiful. But after this third mag dump, there’s steam coming off the end of the barrel.

At this point in the test, Jeremy starts speaking Latin and expounding on the finer points of recoil control. He’s been taking some online Karate classes, which has been really paying off. Bear that in mind if you’re looking to improve your recoil control.* 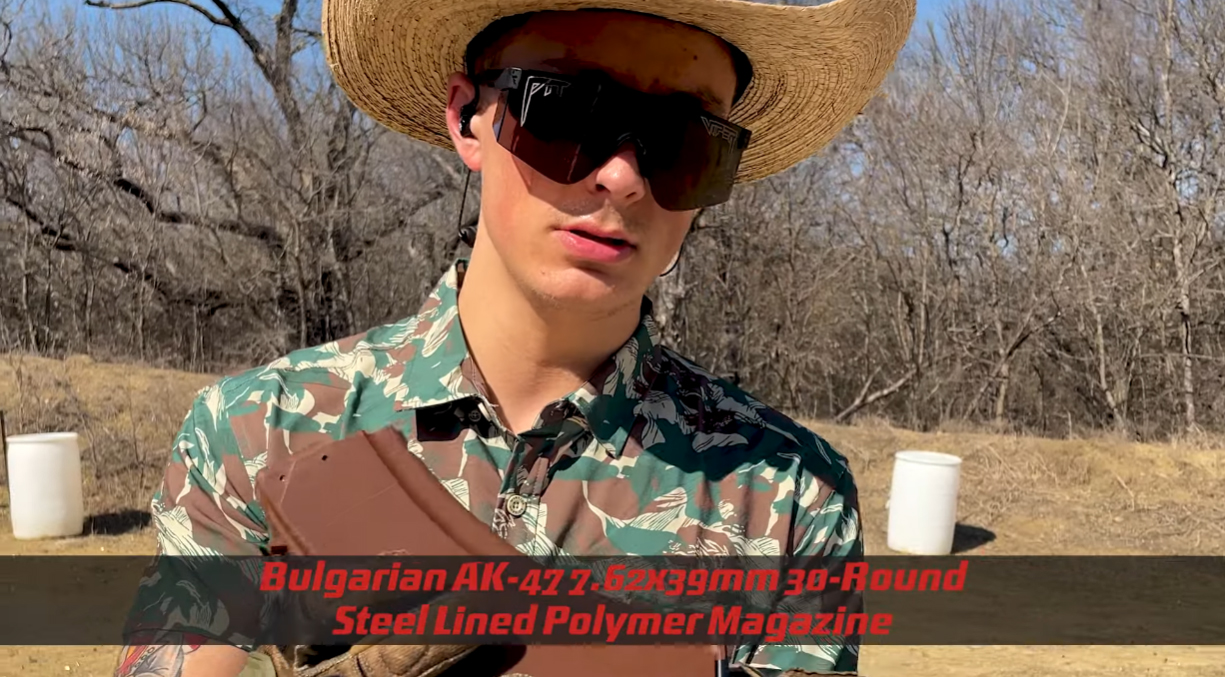 This one is steel all the way around, inside and out. Jeremy says these are shipped with a ton of lubricant to make sure that nothing rusts or goes bad on the boat on the way over.

Is it any wonder that the steel mag handles the drop test like a boss? Steel mags even look better when they’re a little dirty anyway. Oh, and it handles mag dump like a boss, too. 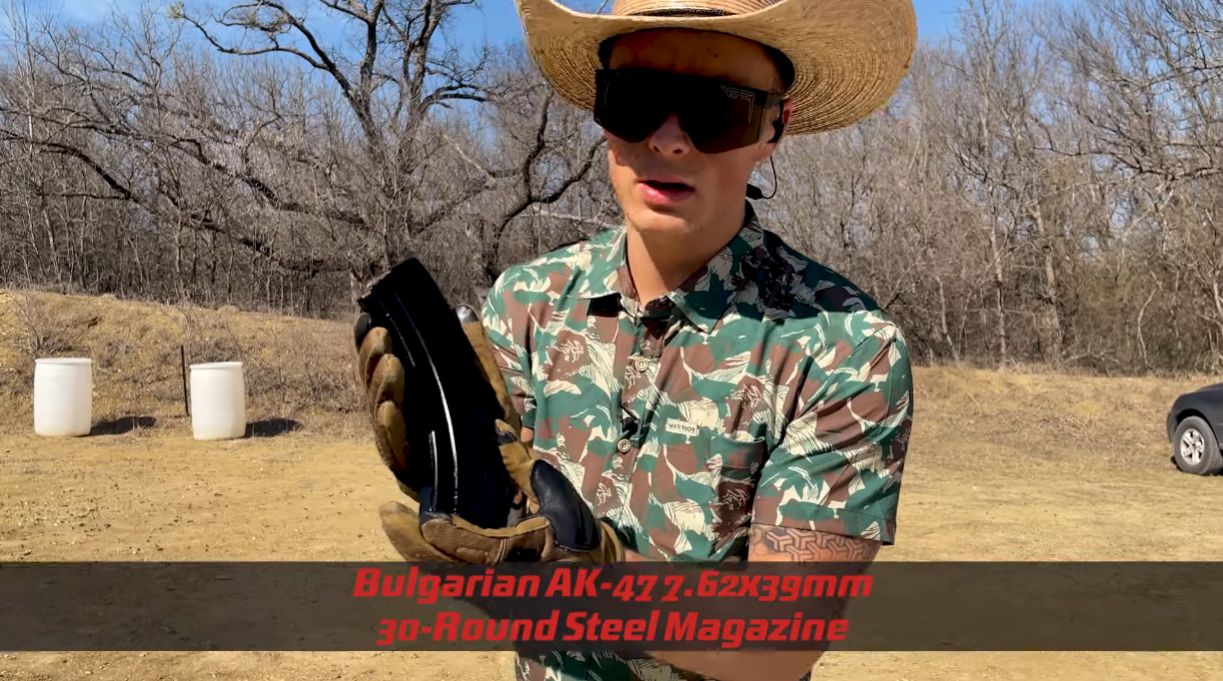 This is the Banana Mag, and it comes with a patch. Will the Sponge-Bob-looking mag perform as well as all the other US Palm mags?

The AK is getting mighty hot, so Jeremy wafts air over the AK to give it a good cool-down. 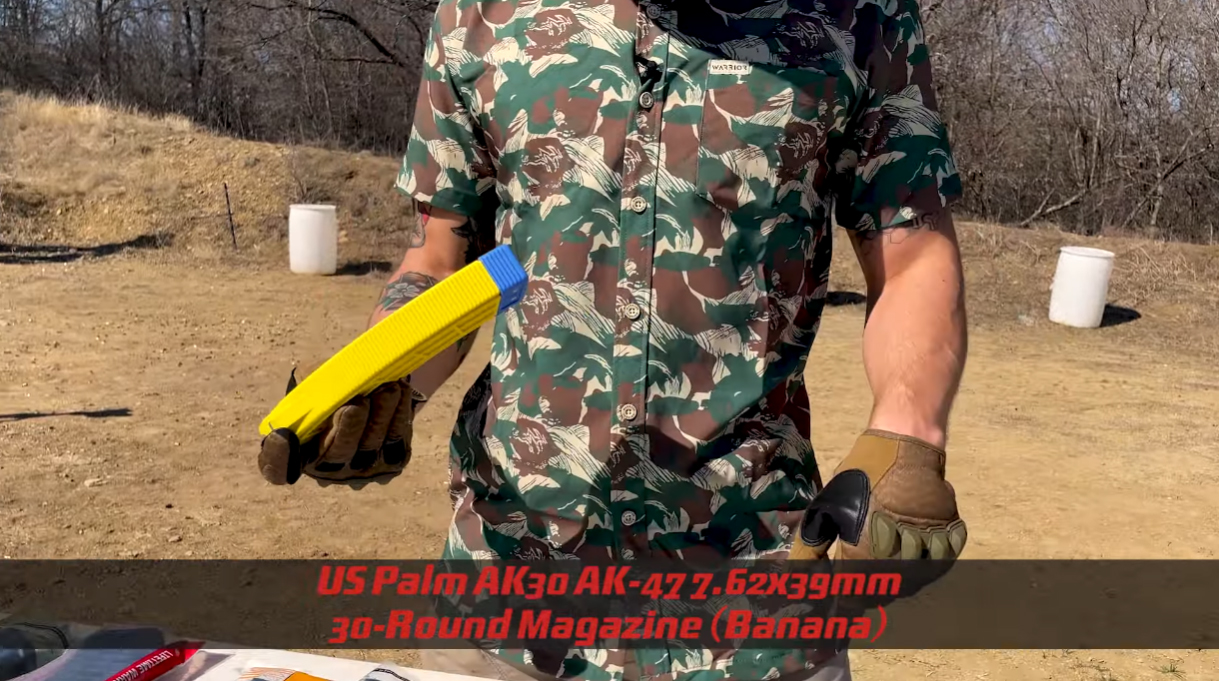 This one looks an awful lot like the Bulgarian, but they’re different. You can see the texture on it is a little bit smoother. When Jeremy loads the mag, he notices that the barrel is still smoking. 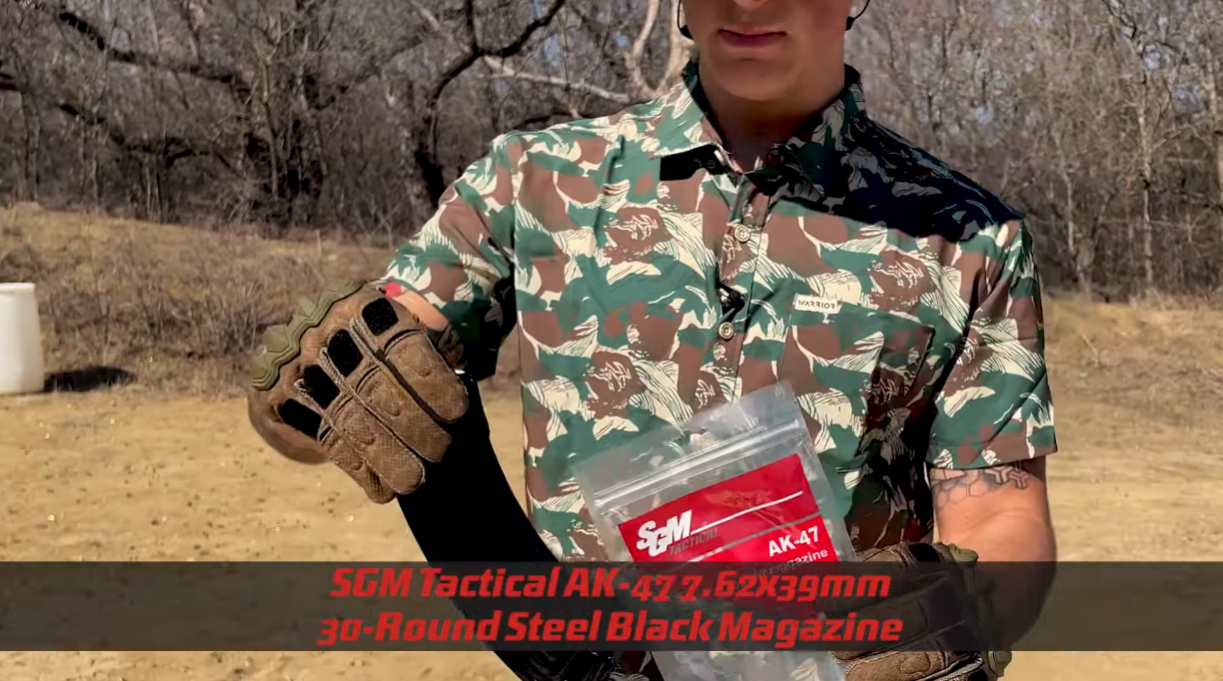 This is the Gen 3 PMAG with the waffle texture. It’s polymer all around, so it’s one of the lighter magazines and also most likely to break and bend when dropped. It does have a steel locking lug, and there’s some steel reinforcement, but Magpul is known world-wide for consistency in their polymer construction. Jeremy assumes he’ll see the same thing in their AK mags since their AR mags are Magpul’s bread and butter.

Jeremy notes that he’s experiencing some positive reinforcement for wearing the gloves because it’s gettin’ hot. 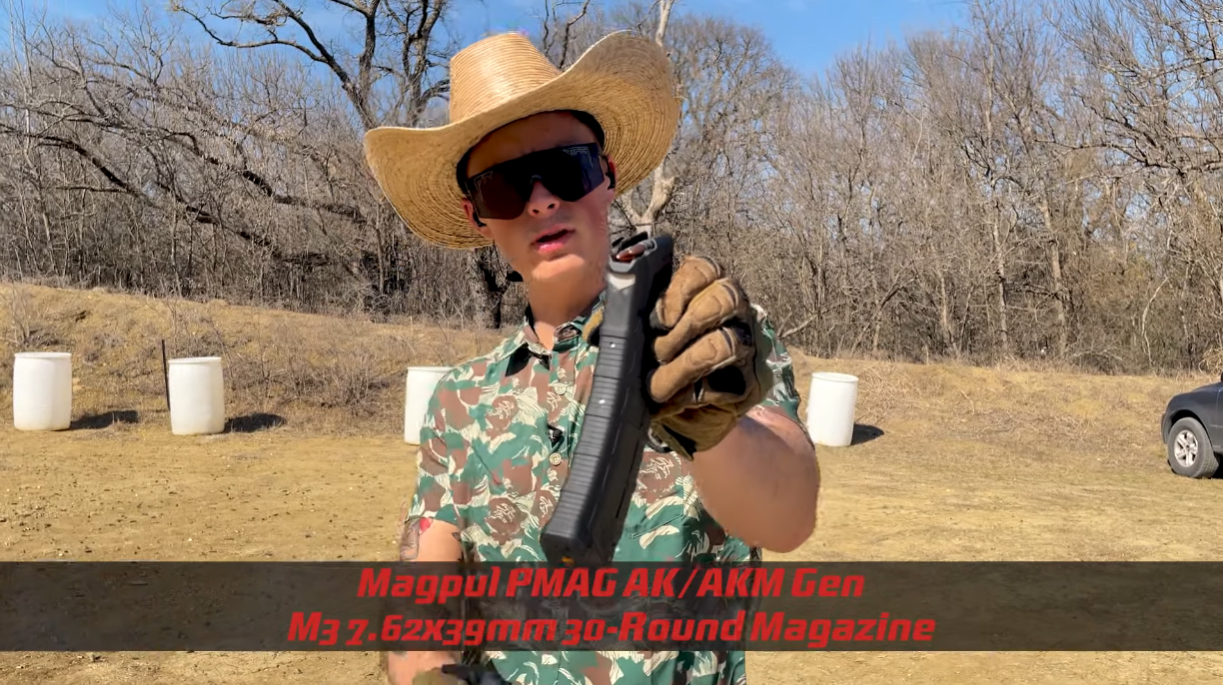 The KCI steel magazine has the design as the previous two steel mags in this trial.

After the mag dump Jeremy says he needs to take a break, the gun’s getting too hot but the KCI mag ran—a little chewed up and smoking just a bit at the top.

At this point in the test, the AK needs a cool down. They even pour some water over the barrel, so you see the steam, and hear the hiss. After she’s cooled down and lubed up, Jeremy says he’s probably going to have some spray come up. But he’ll just shower in it and deal with it the way it is because the trial is almost done with two more mags to go. 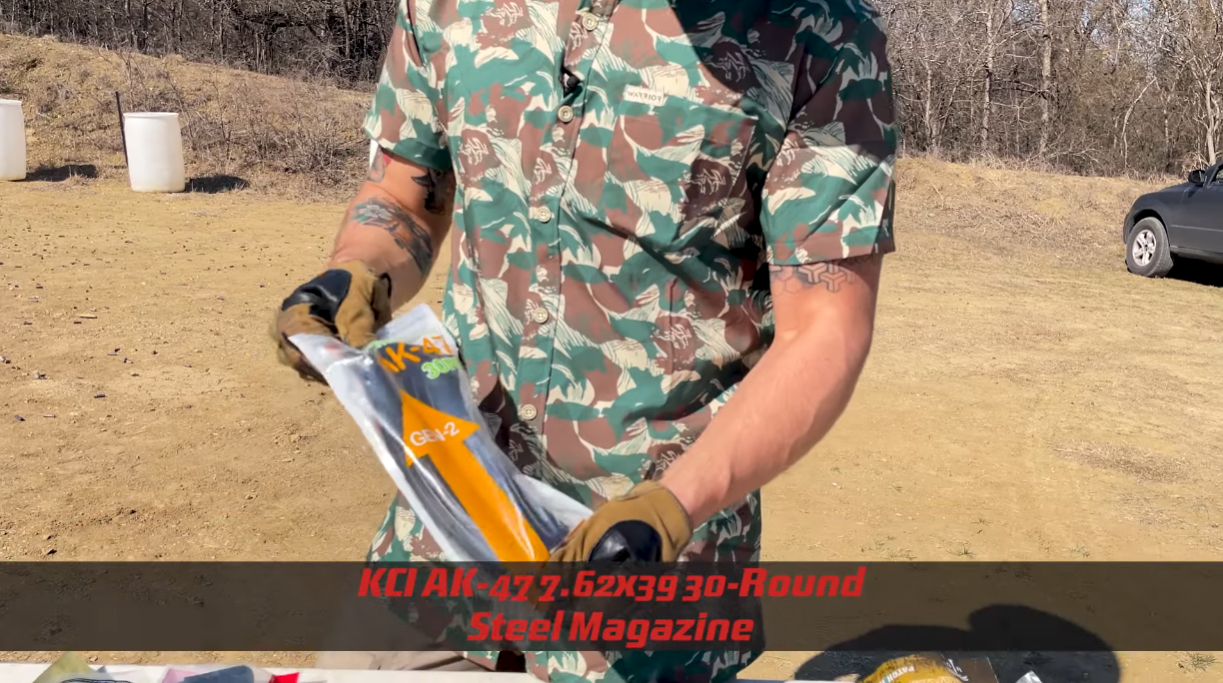 This ProMag magazine is polymer all the way around, lock and lug, all that good stuff. The only thing that’s not polymer on this is the spring.

So this mag lost the top round with the drop test. Is it an absolute catastrophic failure? Not really. It didn’t have any problem with the mag dump, but took a little extra ‘umph to release the mag.

This is the final mag in the test, a PMAG AKM/MOE (Magpul says they’re made with ‘crush proof’ polymer).

After just three mag dumps after cooling down the AK, it’s smoking again. It’s really not a surprise because it gets hot in full auto.

Jeremy finishes up by saying he didn’t choose these mags for the test because he had a preference or because he believed that they would do anything. “I know what you say about certain manufacturers, that they are not good or whatever, but everybody here performed well, minus one ProMag that lost one single round. It’s up to you to decide.” 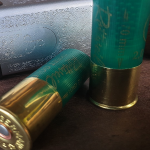 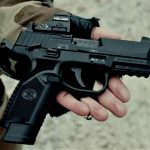