Today we’ve got a treat for ya. GunMag’s very own resident Wrestlemania fan is bringing out a full-auto AR-15 to do a little testing on ten different AR-15 magazines, “from the internet’s most favorite to the internet’s least favorite.” Who doesn’t love a full-auto mag dump?

We’re going to let the results speak for themselves.

Here’s the list of mags included in the test, and how they perform.

Remember, we’re going from the internet’s most favorite to least favorite. So Jeremy starts with a Magpul, because, it’s a Magpul, duh. This is one of the most prolific, most common magazines out there. These mags have polymer feed lips, so they’re supposedly weaker than steel feed lips would be. Do they suffer any damage from the drop test?

This Okay Surefeed magazine is made with aluminum and has dot-textured walls. It handles the drop test, easy peasy, with no dents or deformations. (Not that Jeremy expected any.)

Since the Colt Sporter magazine isn’t made of steel, it’s a little less strong but it is lighter in weight. It doesn’t have a problem with the first drop but loses a round with the second one. “Shoulda had a dirty thirty. Now it’s just 29. Just not the same.” How does it handle the full auto mag dump?

Switching back to another steel magazine, the Duramag is obviously a little heavier. After the first drop test, Jeremy notices that the baseplate came up a little bit. The magazine also loses a round with the second drop. Jeremy asks, “Am I being unfair to expect it not to eject?”

At this point in the test, the AR is starting to heat up and smoke. Well, it’s to be expected, right?

ASC stands for Ammo Storage Component, which is kind of a genius name for a magazine since, technically, it does store your ammo. Until you do your ammo dump, that is. This particular ASC magazine is in the Flat Dark Earth color and has a high-visibility orange polymer follower. It loses one round with the first drop but none with the second.

Jeremy says the gun is getting so hot he can feel the heat now.

This is a very inexpensive polymer magazine. It comes with a dust cover and is windowed on both sides. Noticing that the baseplate is polymer, Jeremy wonders if polymer is better than metal at absorbing the impact of the drop test. Nope. The mag loses one round in the first drop and then loses three more with the second drop. So much for that theory!

ETS mags rank high in cool factor. Since they’re made of translucent polymer, they kees no secrets. The magazine loses one round with the first drop, none with the second, and performs just fine  with the mag dump.

Now, the AR-15 is getting so hot that Jeremy tries to waft some air over it to cool it off a little.

Is the Hexmag really made of carbon fiber? The paperwork says so.

The Promag handles the first drop just fine but loses two rounds with the second drop on the feed lips.

Hopefully, this test gives you some insight into these AR-15 magazines. The internet has its opinions on what’s the best and worst, but don’t take it as the gospel truth. Like Jeremy says, “Go out there and run it. Use your stuff. Get behind the wheel and drive. You’ll get better. You’ll see what works. And all the talkers on the internet can keep talking.”

All of the AR-15 magazines tested performed well for the full auto mag dump. Several of the magazines lost some rounds with the drop test, which Jeremy says is unacceptable under any circumstances. What do you think? Is he wrong?

Do you have more suggestions for future tests? Let us know in the comments below. 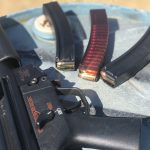 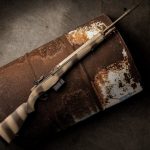