Inevitably, we all know someone who is Team Glock or Team 1911, or whichever team you’re on. But what happens when a self-proclaimed Team 1911 guy gets a brand-new Glock 48 to test and shoot? Enter 1911 Syndicate and his review of a straight out of the box Glock 48.

Admittedly, Jake Dwyer over at the 1911 Syndicate would rather shoot 1911 any day over a Glock. While he doesn’t hate Glock, per se, he certainly isn’t a Glock fanboy. Before they shot the video, he had never shot a Glock 48. His reaction? While saying it pained him to say so, he says that it is really, really not bad and nice to shoot.

Key Takeaways from the Review

When compared to the 43, the 48 is definitely bigger. It has a higher capacity magazine (10+1 for those wondering) and a longer slide which lends itself to a longer sight radius. That last fact alone gives the 48 a leg up on the 43. The roughly ½”, by Jake’s estimation, helps give it
better accuracy with the sights.

Jake goes on to say that the price of the 48 is pretty low, in the low $400 range, making it a screaming deal. The one thing he is not a fan of (besides using speed loaders — don’t get him started on that) is the plastic factory sights. In his opinion, they need to be replaced as soon as possible.

For hand feel, the 48 is only slightly larger than the 43 and feels a lot like the Glock 19. Which, really, it should feel like that given that it’s essentially the Glock 19 frame in a single stack. The single stack helps give the 48 a great low profile that is very concealable.

Jake then went on to shoot both the 43 and the 48 to show just how different the recoils are. The 43 delivers a very sharp, as he put it “nasty recoil” while the 48 is a lot softer and easier to shoot. What he doesn’t understand is the niche category that the Glock 48 fills. It’s not as small
as the 43 so if you’re going to carry a 48, why not just carry the Glock 19 and get the extra rounds.

Jake rounded out the review by going over some key aspects of the Glock 48. He said that the factory sights need to be replaced. The factory trigger has been getting better from Glock, still not awesome but it isn’t bad. Ultimately, Jake is conflicted on this gun – he says it’s cool but
why does it need to exist? It’s accurate, hits at distance, and is a good carry gun.

Want a different take on the 48? Check this one out. 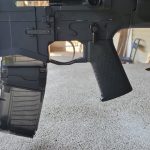