Ken Hackathorn has been a US Army Special Forces Small Arms Instructor, in addition to training various SWAT Teams, the FBI’s HRT, state and local agencies, military Special Operations, and others that are nearly too numerous to mention. To put it bluntly, the man has checked off just about every box that we could conceive of. He has also written for most of the major firearms publications. Hackathorn speaks with authority and wisdom. In this article, we’ll be listening to him discuss the 2-2-2 Skill Drill.

This video addresses what Ken Hackathorn refers to as “Low Round Count Training.” He explains that we all know about the ammo shortage in our country. For many, blasting out a ton of ammo at the range can be financially out of our means. Or many people simply do not have access to ammo because it may just not be available. Empty shelves have been prevalent at gun shops for quite some time now, and while things are springing back currently, they have a long way to go.

Ken Hackathorn and the 2-2-2 Skill Drill

Drills exist that you can perform to develop or maintain skills that do not require a high round count. One such drill is called the 2-2-2 Drill. You begin the drill at ten yards. Hackathorn likes to use the Wilson Combat steel silhouette target, it has a center kill zone that is about seven inches in diameter. In lieu of steel targets, cheap paper plates from the grocery store can serve the purpose and are generally easy to find. Steel is nicer because it gives us immediate feedback, which is more fun.

The object of the drill is to train you to not only get fast, accurate hits with both hands, but also in your dominant hand and your reaction side hand. It is a six-shot drill; first, you draw (from concealment) and fire two rounds with both hands. Next, you use your “strong” (dominant) hand only and then switch to your “weak” (reaction side) hand only.

The goal, naturally, is to get every shot into the circle. Every round that is outside the circle adds one second (oh yes, this is a timed drill). If you miss the entire target, it adds five seconds. With practice and being accomplished, the Performance Standard for this drill is nine seconds. Although you may not be able to do it initially, nine seconds is a goal to try to achieve.

Maintaining Skill with the 2-2-2 Skill Drill

Realize that, with limited rounds, it is more realistic to maintain skill, rather than build it. Ken Hackathorn states that he shoots this drill one time when he goes to the range (and even then, not every time he goes to the range), and he shoots it cold. He believes that shooting it repetitively in one range session and then marveling at your best time of the day does not give you a realistic picture of how you’re doing. In the real world, you don’t get to practice or warm-up, you have to perform cold. Practicing the drill 13 times and then being able to do it in 7.9 seconds is not a true measure of your performance ability. “Your cold drill is the one that counts.”

I will jump in here for a moment and suggest that you may want to perform this drill several times during a range session or two in order to become familiar with the drill and build some skills. After that, I’d fall into Hackathorn’s regimen of shooting the drill at some of your range sessions. That’s just my take on it.

Hackathorn points out how we all love going to the range when the weather is nice. He makes some observations, the first of which is that most people carry their firearms concealed. When they go to the range, they open carry and practice that way. In this arena of very limited ammo, and training time/resources being precious, you should practice how you carry a gun. People complain that wearing a concealment garment is uncomfortable in the heat. Unfortunately, life isn’t always comfortable. Get over it, practice for reality!

Ken Hackathorn was trying out a new pistol for this particular video; a Wilson Combat SFX9 with a four-inch barrel. The SF stands for “Solid Frame”. Rather than having grips, the grip is solid aluminum with texturing machined into the grip. Ken observes that the grip is thin and he seems to enjoy it a lot. The pistol is 9mm and takes their standard 15-round magazine, and can also take an 18-round magazine. It comes complete with red fiber optic front sight.

Ken demonstrated running the drill and did it from concealment in 8.25 seconds. He strongly emphasizes that you should not give up accuracy! Don’t worry about speed; “In the real world, no one’s going to have to yell at you, ‘GO FASTER!’ What will be a problem will be shooting effectively and accurately. Never compromise your accuracy.”

Hackathorn explains that, when changing the pistol from one hand to another, the hand holding the pistol opens up and the other hand drives in and takes over from the support hand. It takes less time to do it than to explain it, and I highly recommend watching the video to get the hang of it.

The drill can be modified, in that, if you want to practice firing more than six rounds, you can. Suppose you want to practice more with your reaction side, you can simply run the drill normally while adding another round or two to that particular side. There’s nothing that says you have to run it the same way every time. He notes that most people will “choke” when firing from the weak hand side if they are going to mess things up. He suggests making sure your grip is firm and really practice pressing that trigger straight back to remedy pulling rounds off target.

For the record,  Ken Hackathorn loves the new Wilson blaster and opines that he may begin carrying one.

This is a great drill for developing skills while not blowing a ton of money on ammo at the range. 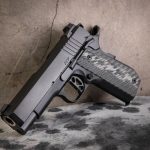 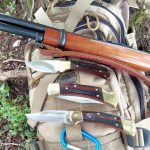