People hunt all over the world. It’s just hardwired into some of us. But African hunting…that’s just another level. An African hunt is the pinnacle adventure for many. But if you’re hunting the biggest of big game, your equipment better be right, including your bullet choices. But no worries. Nosler has your back.

In the video below, RECOILtv’s Iain Harrison gives us the scoop on how his Nosler bullets performed on a recent South African hunt. The results are pretty impressive.

“Whether you own a firearm for self-protection, for hunting, or just plinking in the dirt,” Iain says, “at the end of the day we’re all interested in what happens when that bullet hits its final destination. It’s always good to see what happens in the real world, in terms of performance, versus what happens in gel.”

The Nosler 130 grain E-Tip in .270 Winchester racked up most of Iain’s group’s kills. He shows one example recovered after penetrating both shoulders on a zebra from 300 yards. Another bullet entered a nyala’s chest, plowed through the heart, and lodged in the animal’s hindquarters. Both bullets mushroomed nicely and maintained nearly 100 percent of their weight. Iain estimates their velocity at 2,500 and 3,000 feet per second, respectively.

Iain says he’s a big fan of modern metal bullets because they perform consistently at both ends of the velocity spectrum.  You can get similar performance with an SBR at close range or reaching way out with a longer rifle.

“What I like about modern metal bullets,” Iain says, “is consistency in performance. You’re not going to get that explosive fragmentation that you get from lead bullets. However, you do get the ability to punch through both shoulders, break bone, and probably leave two blood trails.”

Iain is, however, dubious about modern metal bullets’ supposed other benefits. He believes the uproar over lead fragments in meat to be “completely overblown,” especially theoretically protecting wildlife from ingesting lead from fragments in gut piles. He notes that California hunters have been lead-free for a decade, with no impact on condor populations. If condors get lead poising, it’s likely coming from somewhere else.

Iain’s group also used 9.3x62mm rounds for bigger game. The .270 might rule the plains, but cape buffalo is another thing entirely. “Our buffalo hunt was perhaps one of the most exciting things I’ve ever done,” he says. The bullet’s performance on maybe the most dangerous of big game animals was “really eye-opening.”

Iain used Nosler’s 286-grain Safari Solid 9.3x62mm flat-nosed round. The bullet is solid brass, turned on a CNC machine. “Extremely consistent and extremely hard,” Iain says. Even so, the cape buffalo soaked up two strong shoulder hits that Iain says “would have been lights out” for any other animal. He hit the buffalo with a third shot that entered the hip and exited through the shoulder. They got video of the spent round kicking up a dust plume just beyond the buffalo.

“If you want penetration,” Iain says, “this is the way to go,” though he notes that there’s not much use for it in North America, except maybe for grizzly bears or stopping a Mack Truck. The round hits with about 3,000 energy ft/lbs. with “massive, massive penetration.”

The group also had great success with Nosler’s 250-grain 9.3x62mm Trophy Accubond rounds. The Accubond bullet has “great terminal performance,” and a plastic tip to initiate expansion. Iain says they had “no complaints with any of these bullets, whatsoever.”

The 130-grain .270 Winchester E-Tips grouped at no more than 1.25 inches from three different rifles at 100 yards. Iain says the .270 had a “pretty strong performance across the board.” Its average muzzle velocity was 3,050 fps, which Iain says handloaders can easily boost by 200 fps. 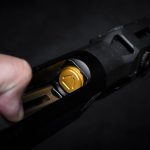 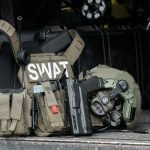