The first question that most people ask when receiving any gun is, what is the best ammo to use with it?

This depends on many factors, including what the shooter is actually using the gun for, however one of the largest factors that makes a certain ammo type the best is the actual gun. Not every gun is alike and even with a pistol that was made on the same manufacturing line back to back, it may still shoot better with one type of ammo vs the other. With that though, there is merit to see how ammo performs to get an idea of where to start.

10mm is quickly becoming a favorite in many households. On a day of putting a new Sig XTEN through its paces, we were able to shoot six different kinds of ammo and see how they grouped and how the recoil felt. Ammo choices are not only based on the grouping size during testing but also on how well you as the shooter can shoot the gun. One type of ammo can show a great group but another close 2nd could be a lot easier to shoot. And let’s face it, this is 10mm, and it is not the easiest of shooting, to begin with.

Below are the results.

We have a brand new Sig P320 XTEN. This is a full-sized, striker-fired, polymer-framed, 10mm Auto pistol with a 5″ barrel and day/night sights.

Honestly, the Sig P320 XTEN is a P320 but in a larger frame and different caliber. The recoil acceptance for the power of the 10mm is on point and the firearm is still practical. It has day/night sights, is optic-ready, and can be seated into holsters that many already own.

For this exercise, a five-round group is shot at 25 yds at a B-8, not under time, for each type of ammo. To have consistent shooting I called on Joshua Shaw, A GrandMaster in USPSA to shoot the groups.

This type of drill is good for anyone that just received a brand-new firearm or barrel. Here’s a tip: don’t go to the store and pick up a ton of ammo. You might end up with ammo that shoots like crap in your gun, or you might miss out on a more capable gun/ammo pairing. Instead, shoot this drill with five different types of ammo first.

Doing this means that you only have to buy one box per ammo type and use a couple of targets to really hone in on what type of ammo works best in your firearm. It also takes less than an hour at the range.

A little-known fact: we often do this drill and testing during reloading in the precision rifle world. When we get a new barrel we will use the last load as a baseline to start our grouping and velocity tests, but we will load a couple more rounds with different powder loads and seating depths. This is the same thing that we are doing today with a pistol. Barrels like different things, as do pistols, don’t allow yourself a less capable firearm because you didn’t take the time to find the best ammo for it.

Jacketed Hollow Point ammo was chosen for this grouping test. This type of ammo is great for defensive situations or hunting. 10mm is a very niche caliber. Below are the ammo types for each group.

Don’t worry about what side of the paper that the rounds are impacting, just focus on group size. The iron sights weren’t adjusted before shooting and different ammunition will always need a different zero.

Based on the target alone, the best group that day was the SIG V-Crown 180 gr JHP,and worst was the Federal Punch 200gr. Feedback from Josh was that the softest shooting was the PMC ammunition, which also proved to have a great group.

Group sizes in order, beginning with the tightest group”

When choosing your desired ammo type you want to know the group sizing as well as how you can manage the recoil. Josh stated that the softest shooting was the PMC. Even if that didn’t have the tightest group, it had a great group and Josh could handle it better than other ammo types. To have a capable gun, the shooter needs to be capable too, and a softer shooting ammo type could allow for better shooting, no matter what the group testing showed.

Personally, for this specific gun, I would first look at how the ammunition expands between the two best ammo types on the list, Sig V-Crown and PMC. After that research, I would then go forward with my decision on what to carry in that gun. Without the expansion research, I would choose the PMC as my ammo type due to softer shooting and a great group.

Remember, these groups are for this particular Sig P320 XTEN. Yours may like different ammo. 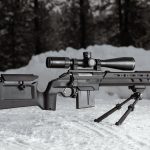