Ian McCollum is back with what may be the most well-thought-out bullpup design in the world. Yeah, I know, Tavor and all that, but take a look at the HS Produkt VHS-2 and then see what you think. For the two videos you’ll find below, Ian makes use of his extensive secret contacts in the French Defense establishment to examine and shoot two rifles that went through the French Army testing when they were looking to replace the FAMAS. While the Heckler & Koch 416 eventually got the nod, the VHS-2 came in second to an already proven and outstanding rifle.

First, a little background. HS Produkt is a small arms manufacturer in Croatia which, after the Balkan Wars of the 1990s and early 2000s, felt the need for a domestic arms production capability. HS Produkt designed and manufactures the HS 2000 pistol, known in the United States as the Springfield Armory XD Series, which Springfield imports from Croatia. The VHS-2 is the successor of the VHS-1, a bullpup reminiscent of the FAMAS, but with all the growing pains of a company’s first outing with a new type of firearm. HS Produkt learned from the VHS-1 and the new design shows the benefits of that experience.

Ian says right up front that HS Produkt has “done a pretty sweet job on this rifle.” Let’s do a quick rundown of the features and specs and then talk about it a little:

Right or Sinister? Totally Up to the Shooter

Many guns claim to be ambidextrous, and they are, to a point. That claim usually applies to the controls but not the internals. The VHS-2 is as truly ambidextrous as any gun in the world. The charging handle is similar to the FAMAS, but it flips out to either side with no adjustment. The fire selector is the same on both sides. The mag release and bolt release are on the bottom of the rifle and intuitively operated during and after a mag change. Both are reminiscent of the AK release lever, just easier to operate. There are lots of sling attachment points, QD and otherwise, on both sides of the rifle.

The most interesting ambi feature is the ability to set the rifle up to eject to whichever side the shooter prefers. There are ejection ports on both sides of the rifle. The dust cover on the side not in use is easily pinned shut. When the bolt assembly is removed, the shooter can turn the AR-18 style bolt to set the extractor to the desired side. The cantilevered cam pin is then inserted, keeping the bolt set to that side. Ian points out that it’s far easier than switching a Tavor or a Steyr AUG, both of which require a different receiver.

The necessity of a right-handed shooter to sometimes shoot lefty, and vice versa, has also been considered. The stock’s cheekpiece includes brass deflectors on both sides, ensuring the shooter doesn’t catch an ejected cartridge case in the face. Ian notes that he gets the slightest breeze on the beard when shooting with his off hand, but that’s it. It’s really a well-thought-out and rather ingenious design.

The length of pull is fairly long, but the VHS-2 comes with interchangeable butt pads and a collapsible stock anyway. The sights are mounted on the long carry handle, which is also equipped with a full-length Picatinny rail. The rear sight is a metal flip-up design with different apertures for different ranges. The front sight, also metal and flip-up, is a hooded post, adjustable for elevation. Ian says that even if you chose not to mount an optic on that top rail, the iron sights are very good, and the rifle would perform well.

The coolest stuff, for me anyway, is near the front of the rifle. Behind the birdcage flash hider are a bayonet lug and a rifle grenade support. Removing the carry handle assembly, easily done with push pins, reveals the short-stroke gas piston and gas block. The gas block only has one port and two settings. One, obviously, is fire and the other is for rifle grenades. There is no port at all for that setting.

But rifle grenades aren’t the only firepower upgrade for the VHS-2. The handguard is removed with a push pin, whereupon the rifle can take the business part of the stand-alone HS Produkt 40mm grenade launcher, which has the exact same attachment system as the handguard. It can literally be attached to the rifle in less than a minute and be ready to roll. Just swing out the barrel of the launcher, load her up, and you’re suddenly a grenadier.

The mag well is cool because it can be easily removed to accept either standard AR-15 mags or the G36 mags used by the Croatian military. HS Produkt even created a special mag well for the French Army trials that took FAMAS mags. That’s a nice feature to have.

Finally, the rifle has an all-metal and easily removed fire control group similar to the FAMAS and the Steyr AUG. Ian believes this modularity lends itself to trigger upgrades should some enterprising company decide to make the effort.

How Does it Shoot?

Ian shot two versions of the rifle. Both had semi-automatic fire, while one had full auto and the other was limited to two round bursts, a request from the French police, who were also testing the rifle. He fired the guns on all three settings.

“Overall,” Ian tells us, “It is a remarkably pleasant, comfortable, easy rifle to shoot.” In another instance, he says the VHS-2 is “a quite nice rifle. A big reason for that is the design that locates the barrel and chamber on the same plane as the center of the buttstock, and by extension, the shooter’s shoulder. This arrangement all but eliminates any tendency to climb as it recoils.

Ian shot the guns right and left-handed and had no problems with “eating brass” when firing from the non-dominant side. The rate of fire, on paper, is about a thousand rounds per minute, though Ian says he got the impression that the full-auto rate of fire was just a little slower than the two-round burst. He does say that his perception may be entirely subjective. He also notes that, though he’s not sold on the utility of two-round bursts, they are certainly controllable. “It is,” he says again, “quite comfortable.”

Finally, Ian whips out the grenade launcher and attaches it to the rifle in place of the handguard. Since he’s working on an indoor range, he fires rubber riot grenades, but the effect is still pretty cool, evidenced by the elated expression on his face after firing.

You Can Have One Too. Sort of.

All in all, the VHS-2 looks to be a very nice rifle. Personally, I’ve never really been attracted to bullpups, but this one is tempting. If you feel the same, you can pick up the civilian version of the VHS-2 — the Hellion, which was just unveiled by Springfield Armory who, as we noted before, imports HS Produkt guns into the US. There are some modifications to make them legal with the Feds, most notably the M-LOK handguard and the pistol grip. Also, they are semi-automatic and don’t have the capability to mount a bayonet or fire rifle grenades. And no grenade launcher attachment either. Sigh. But, if you’re interested, here’s a gun with only cosmetic changes that has experienced the trials and errors of production and done well in full-on military trials. Might be worth a look since we aren’t likely to get a shot at the real thing.

What do you think? Is this the beginning of a new kind of bullpup? Are you thinking about picking up a Hellion? Let us know in the comments. 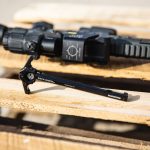 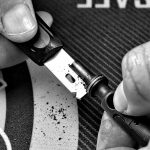