Are you looking for some good full-metal jacketed 9mm ammo? You have no doubt heard of Blazer Ammunition. It is made in the USA (Lewiston, Ohio) and manufactured in the CCI production facility. I use Blazer ammo a lot and never hesitate to pick up a box when I’m at the store. These days there isn’t really such a thing as cheap ammo, but Blazer is about as good of a deal as you can find. It’s not just on the budget-friendly side though, it happens to be some good ammo.

You can find some cheaper stuff like Wolf or Tula, but the cheapest is not always the best way to go. Even if you want to save some money and just put in a little range time, you want to make sure you have ammo that will be consistent and reliable. Some guns handle just about any kind of ammo, and some do not like the cheap stuff. I rarely see a handgun that won’t handle Blazer’s FMJ 9mm rounds.

Some people still think the 9mm Luger is a newer, more modern round. And while improvements have been made to improve it, the 9mm Luger was invented in 1901. This was even before the .45 caliber that John Moses Browning invented. It is a tried-and-true caliber that is now used by people all around the globe. It is the standard issue caliber by the US Military and law enforcement around the country. Arguably the most popular concealed carry round by citizens everywhere, it continues to gain in popularity. It is just large enough to be effective yet small enough to allow for multiple rounds to be carried without adding a lot of weight.

Because the 9mm round is so effective, it has been used in nearly every type of firearm on the planet. Guns like the Beretta 92F, Glock 17, the classic German Luger, and more have all been chambered in the 9mm round. It serves well as a universal caliber for anyone wishing to have a concealed carry gun as well as a larger framed gun while only stocking up on one type of ammunition.

9mm ammo can be found in mostly three common grains: 115, 124, and 147. The heavier the grain, the slower the bullet, but the more energy it will have when it hits its target. When using a full metal jacket like the Blazer 115 Grain FMJ, you have better accuracy and distance on the range than you would with a hollow point round. A 9mm round can be effective out to a few hundred yards. From a handgun, body-size targets can be hit relatively easily at 100 yards. That makes a 9mm handgun a very handy weapon for self-defense.

Blazer 9mm ammo is not just reliable but can also be worth some money after you fire it. Their brass cases are well made and because of their high-quality brass, can be reloaded up to five times. This makes the casings worth collecting after you are done on the range. If you are not into reloading, save them up and sell them to someone who is. It will bring down the overall cost of ammo while allowing some range time. Blazer’s non-corrosive casings and boxer primers make this a great budget ammo for the range.

There are some types of ammo I would not recommend storing for long periods of time. When you do store ammo, you want to make sure the manufacturer uses good-quality powder, casings, and primers. Blazer ammunition should be fine to store long-term if you keep the moisture away from it. Heat is also an enemy to all ammo so store it in a dry, cool place if it will be set aside for the long haul.

Blazer ammo boxes are thick cardboard that will help protect it during storage times and the plastic crates that hold the ammo are excellent. Some of the cheap stuff comes with flimsy crates that fall apart as you stack multiple boxes inside of an ammo can. The best method for storing is to place the Blazer boxed ammo inside a military surplus ammo can with a few desiccant packets to help control the moisture. Keep the ammo can in a cool, dry place and it will be good to go.

On the Range With Blazer

I shoot a lot of different brands of ammunition but one of my favorite stories involves Blazer ammo. Every now and then luck intervenes and makes a shooter look better than they really are. I was this lucky on the range one afternoon during a training event. I had just finished a 2-gun shoot that involved running, crawling, and switching from handgun to rifle throughout the course. The last shot of the event was an eight inch metal plate at 100 yards with the short barrel rifle we carry on duty. After making it ding, the range instructor yelled “bonus point if you can hit it with your handgun.” In a very off-handed way, I raised my Glock out to my side with one hand and pull the trigger. A split-second pause and then, “Ding.”

To this day we joke about how it must have been that Blazer ammo! What’s not a joke however is that it was Blazer ammo, and it did hit the target. Could I have made that shot again one-handed without really taking any time to aim? Probably not, but it made me more impressed with Blazer’s FMJ boxed ammo.

There is a lot of good ammo out there, but it’s hard to beat the quality and price of Blazer’s ammunition. It’s packaged well, made with good materials, and shoots great. I don’t really have anything to complain about with their product. I carry hollow points in my handguns and train with FMJ like the Blazer 9mm 115 Grain ammo. It’s great for storing and the price is about as cheap as it gets before you start losing quality. I would definitely give Blazer two thumbs up. 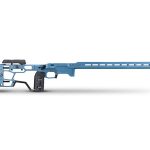 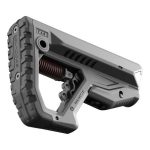