With the popularity of pistol caliber carbines and lightweight AR-style rifles, Blue Force Gear has upgraded its offerings aimed directly at those consumers wanting lighter and slimmer slings. Taking the previously limited-edition Vickers SMG Sling and making it a permanent member of their line-up as the Vickers ONE Sling, Blue Force Gear also upgraded the GMT Sling family to include a 1” option.

The 1” GMT sling is great for shooters who want a tailed sling. It uses a custom double-locking buckle interface that is manufactured and designed from durable and rust-free glass-filled nylon. The adjuster allows for consistent tension for both tightening or loosening the sling, and it stays in place until the user wants it to move.

The adjuster is a main feature of the GMT sling with stops sewn into the tails of the sling that keep it together. BFG uses a proprietary solution dyed Cordura nylon webbing to keep the thickness and softness needed for a comfortable sling and keep it from rolling when in use. The material works well with the adjuster under tension and reduces the chance of being a snag hazard.

BFG took the Vickers sling and trimmed it down to create the Vickers One Sling. The Vickers One was designed for pistol caliber carbines and SMG but is compatible with most one-inch sling attachment hardware, including BFG’s Push Button Swivels, sling hooks, and the ULoop.

Featuring the BFG exclusive 1-inch Zytel nylon hardware and Invista solution-dye Cordura, the Vickers One sling is a durable option that is 100% made in the US with US-made materials. The Vickers One sling has all the features of the Combat Application Sling but in a minimalist design that is smaller and lighter than the original. According to BFG, the Vickers One weighs 23% less than the original Vickers Sling, so for folks looking for an option for their lightweight build, this is it.

Able to transition between carry sling and combat ready, the Vickers One is available in two models: the Base model and the Dual Push Button model. The base model utilizes triglides on the front and rear for direct attachment to sling swivels. The Dual Push Button model is constructed with a push button sling swivel in the front and a captive swivel in the rear.

Both models of the Vickers One sling are available in black, coyote brown, and Multicam with a price tag of $49.95. The Dual Push Button model has a price tag of $79.95. 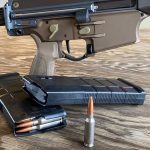 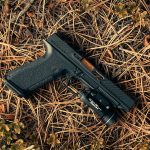