Browning has seriously upgraded its offering for 2023 to include four X-Series bolt-action rifles, 15 shotguns, and three additional models of the Buck Mark rimfire pistol. With so many options, you’re sure to find something you want.

The first Target bolt-action rifle is the Pro McMillan model. This rifle is optimized for long-range target shooting and competition. It has a heavier receiver and a threaded, fluted stainless steel barrel with a Recoil Hawg muzzle brake. It also features a Target DLX trigger, an extended bolt handle, and the adjustable McMillan A3-5 carbon fiber stock. The X-Bolt Target Pro McMillan has an MSRP of $4,129.99.

The next X-Bolt Target bolt-actions are the Max and Lite Max models. These models are also optimized for long-range shooting and competition, like the Pro model. It features similar furniture and components as the Pro model, but the Max and Lite Max models have an adjustable Max composite stock. The Lite Max has a different barrel profile and a weight 12 ounces lighter than the Max. The Max model has an MSRP of $1,729.99 and the Lite Max has an MSRP of $1,779.99.

Browning has expanded its Shotgun family to include 15 new models. While we won’t go through every model in great detail, here are a few highlights:

The Citori High Grade 50th Anniversary shotgun is a High grade over and under shotgun celebrating 50 years of its legendary namesake. The shotgun is designed for hunting and target shooting and features extensive receiver engraving with gold accents. It has a premium gloss oil finish on Grade IV Turkish walnut stock. It has an MSRP of $8,399.99

Cynergy has two models joining its family the Wicked Wing Auric and the CX. The Wicked Wing is an all-conditions over-and-under shotgun perfect for hunting. It has an ultra-low-profile receiver, camo composite stock, and Burnt Bronze Cerakote on the metal surfaces. The CX 20ga model is a crossover design with a 60/40 POI that is well-suited to both field and target activities. The Cynergy Wicket Wing has an MSRP of $2,579.99 while the Cynergy CX has an MSRP of $2,079.99.

The A5 series of shotguns got the biggest expansion.

This line of hunting shotguns is great for birds from quail up to goose. Features vary by the model with many employing the Invector choke tubes. Prices range from just over $2,000 to up to around $2,400 MSRP.

Next up in the shotgun family expansion is the Silver Field Auric and Silver Rifled Deer firearms. These two are autoloading shotguns, with the Silver Field built to perform with a wide range of loads while the Silver Rifled Deer has a barrel that has been optimized for slug and sabot ammo. The Field has a composite stock and forearm in the Auric camo pattern while the Rifled Deer model has the OVIX Concealment camo pattern. The Field has a price tag of $1,349.99 and the Rifled Deer has a price tag of $1,479.99 to $1,579.99 depending on features.

The last shotgun is the Gold Light 10 Gauge Field in Auric. This is a 10-gauge autoloading shotgun with a redesigned stock and forearm. It has a textured tripped and standard Invector interchangeable choke tube system and a four-shell magazine capacity. It has an MSRP of $1,999.99.

Rounding out the expansion to Browning’s line-up are the Buck Mark pistol expansions. The first up is the Buck Mark Vision Black/Gold Suppressor Ready model with a Vortex Red Dot. According to Browning, it is an accurate .22lr autoloading pistol that features a lightweight Vision barrel, Vortex Crossfire Red dot optic, and a ½”x28 threaded barrel with a muzzle brake. It has a price tag of $1,079.99.

The next is the Buck Mark Hunter 5.9 pistol. The Hunter 5.9 Buck Mark has a machined alloy frame, and a 5.9” matte-blued bull barrel that is threaded ½”x28 for a suppressor. It has a co-witnessing fiber-optic front sight and windage adjustable rear sight. It too comes with a Vortex Crossfire red dog sight as well and a price tag of $899.99.

The last Buck Mark pistol is the Medallion Rosewood with a Vortex Red Dot optic. This model of the pistol is an autoloading pistol, like other Buck Marks, with a blackened stainless steel slab slide barrel and laminated rosewood-colored grips with a gold Buckmark. The front fiber-optic sight co-witnesses while the rear sight is adjustable for windage. The Buck Mark Rosewood Medallion .22lr pistol has an MSRP of $929.99. 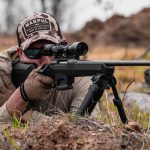