Florida-based B&T USA just announced the next-gen version of its SPR300—the Special Purpose Rifle that is equipped with an integral suppressor. This one is the SPR300 PRO with several improvements including, a new chassis, Timney trigger, and folding stock. And, well, this is GunMag, you know…we’re pretty sure that the best new feature about this new model is that it’s designed to take AR magazines!

The original SPR300 was originally developed for European special mission units and has an incredible reputation as a whisper-quiet precision rifle that boasts comparable sound and flash signature to that of an air rifle.

Oh, and did we mention, it takes AR mags?

Here’s how the company describes it in the official press release:

B&T USA is excited to announce the release of its next generation SPR300 (Special Purpose Rifle 300BLK), the SPR300 PRO. Built for maximum accuracy out to 165 yards, the SPR300 PRO features a 9.8-inch 1:8 twist barrel chambered for 300BlackOut (7.62x35mm). The platform features a foldable, fully adjustable stock; extended top rail designed to accept clip-on night vision/thermal devices and prisms; a quick-detach bipod and a thread-on suppressor. Due to precision Swiss engineering, the SPR300 PRO can be broken down and quickly reassembled with no change in point of impact. 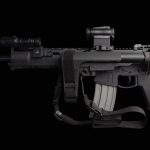 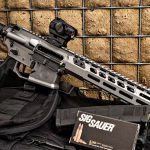