One of the most complex writing tasks any serious gun review writer can face is a firearm with a venerable reputation for performance. Colt, even under its new corporate structure, makes guns that work and the Combat Elite is no exception. This is a fine example of a factory 1911 from the company that defined the standard for factory 1911s.

Saying anything that hasn’t been said thousands of times before will be complicated.

To this end, I think I can empathize with the engineers at Colt. The Combat Elite must have begun with one of those board-room discussions where someone in either sales or marketing, or both, asked for something new in a 1911. I can hear it now—”We need something new!”

New. The standard single-action semi-auto in its basic 5″ form is about as old as guns get these days. The only handguns currently in production that could remotely compare are the Single Action Army revolvers (also made by Colt). So how do you take something so familiar to your customers and change it in a way that would make it new?

It all comes down to looks.

Colt’s Combat Elite Government 1911 has a very distinctive finish. While most of the features are a step up from what you’d find on a bog-standard 1911A1 build, the first thing that you’ll notice is its two-tone finish.

And that finish is superb. It is electric. The ion-bond PVD finish on the curved surface has been sanded off of the flats, revealing the stainless below, and it provides a black/silver contrast that is really mesmerizing.

As a student of steel, I’m still not 100% confident I can speak to the finishing technique. I don’t believe the steel flats are brushed free of their finish, as the brush fibers would be too hard to control.

My assumption is that the high spots, such as they are, might be sanded on a 2 x 72 grinder with a fine belt. The finish shows really fine directional scratches, and—if done on a flat platen—it could allow for the control needed to cut such crisp lines.

Either way, the finish is exceptional—really clean, perfectly executed, and flashy. I say flashy. It is meant to be looked at, but I don’t find it to be as ostentatious as some guns with chrome finishes or gold controls.

But what makes this a Combat Elite?

Naming products is really complex. I’ve been involved in the process with both guns and accessories, and it is damn near impossible to get good names to pass through the trademark protections process. So companies often end up going with names they already have protected, and I’m guessing that’s the case here, too.

There’s nothing about the look of this particular gun that speaks to combat. Colt has made some fighting 1911s—the originals, of course, but a lot of the single-actions with refined features are still in favor by those who want protective finishes, enhanced controls, and more functional sights. But this is a gun that is meant to be seen, not one that’s easily camouflaged.

Maybe after your eyes have adjusted to the glare of the finish, you’ll see some more Combat Elite features. This is a series, after all. In .45 ACP, or 9mm; Defender, Commander, and Govt.—they all have a couple of things in common.

The controls are oversized. From the skeletonized hammer to the thumb safety, and the beavertail grip safety… they’re all what you would expect from a 1911 built for practical carry.

These are series 80 guns, so they have the mechanical firing pin block. This only falls when the trigger is pulled. A series 80 gun provides an extra measure of safety in the event of an accidental strike on the hammer (which sits right up on the firing pin when the hammer is down).

Carrying a 1911 with a round in the chamber and the hammer down is a bad idea, but that’s hard to communicate. That’s why we have the series 80 guns now.

Back on track… There’s one element of the Combat Elite that has to be felt. The checkering on the front strap is intense: 25 lines per inch. This gives a sharp and uncompromising grip surface. My 15-year-old, whose hands aren’t as calloused as mine, claims they draw blood. I love the grip texture. And the G10 grips are useful, too. All told, this gun shoots like a well-built carry gun.

The 5″ 1911 is my personal favorite for OWB EDC. I’ve carried these guns off and on for more than a decade now. While I’m not carrying one concealed much anymore, I still respect its potential. The 1911 earned its place in history, for sure.

Accuracy from the Combat Elite is respectable. I’m more concerned with practical speed, and this single-action checks those boxes.

The aggressive grip texture helps with the speed of follow-up shots. The controls are big enough to be almost instinctively deactivated during the draw. And even the top of the slide, which has been left black, cuts that glare.

The Combat Elite Government is not cheap. No Colt 1911s are, either in their build or their pricing. This one has an MSRP of $1399.

Is it worth it? The quality of this build speaks volumes. My gut tells me the two-tone finish is going to polarize buyers, though, with the love-it and hate-it crowds being pretty far apart. 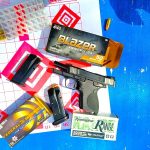 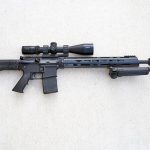