The Smith and Wesson CSX 9mm pistol is officially one of the most talked-about new guns of 2022, albeit slightly less so than the Shield EZ 30 Super Carry. Its design, as you’ll read, is more than a little different from other Smith and Wesson pistols. And for that matter, all other micro-compacts we’ve seen to date.

We first took note of the weapon after the Primer Peak Blog noticed a Reddit post about the new handgun and reported on it. This was prior to the official release of the weapon, which came some days later. The original photo of SW’s new concealed carry photo apparently came from someone working at an S&W retailer, who posted it to social media. Those posts were subsequently taken down, but not before discussion of the CSX was all over Reddit, forums, and other social media channels. Many such conversations referred to the weapon as a “hybrid”; not in the way that a Glock 19X is a hybrid, but rather that it looks to be an alloy of the Shield EZ and 1911 style frames.

Happily, most of our questions were answered when the release and Julie Golob’s video rundown came out.

We eventually received additional details of the CSX (which btw kinda looks like a Colt Mustang to me) mostly confirming the speculations of “gun people” on the internet, to wit, it is:

Perhaps more importantly — since I love old snubbies — we learned that CSX stands for Chief’s Special X. That won’t make it shoot any better or function any more reliably, and you might not think that’s important information, but this is my article and I think it’s cool so I’m listing it as an important feature.

The following is part of the various CSX press and social media announcements.

Featuring Smith & Wesson’s classic design characteristics, the aluminum alloy frame has an optimized 18-degree grip angle. Likewise, the textured grip includes a textured front strap and a removable textured polymer back strap. As a result, every shooter can customize the level of concealment and ergonomic fit, dialing in the personal experience.

Promoting enhanced manipulation in adverse conditions, the slide features both forward and rear cocking serrations. In addition, a flared design accentuates the rear serrations, so you can grip it and rip it with ease. Running along the bottom of the slide are ambidextrous slide release and manual safeties for right- and left-handed shooters. Likewise, the CSX ships with two changeable magazine release buttons, for right- and left-hand configuration.

S&W detailed the new handgun thusly in a blog post:

The first thing that might draw your eye is the single-action external hammer. This provides a crisp and consistent trigger press while the visual and physical control of the hammer offers additional confidence for concealed carry, especially while reholstering.

Below the hammer, you’ll find the ambidextrous safety. The innovative design incorporates external safeties pinned inside the grip and located under the hammer. These steel ambidextrous safeties hinge along the back of the grip for efficient access and positive engagement for different hand sizes and shooting grips.

Once your eye drifts down the back of the pistol past the hammer and safety, you’ll notice the interchangeable backstraps. The CSX pistol comes with two interchangeable backstraps to suit your ideal grip and concealment preferences. The standard backstrap fills the hand for comfort. The smaller backstrap offers not only a reduced size grip for owners with smaller hand sizes but also a lower profile for concealment.

The aluminum alloy frame also features a truly ambidextrous steel slide stop, accessible to both right and left-handed users. The low-profile ridge design allows for easy activation into the up position while tactile grooves along the top ridge make for efficient deactivation. For all of the left-handed shooters, the mag release is changeable. Offering options for both right and left-hand access, the CSX pistol ships with two, easy-to-change magazine release buttons. The textured design and slight rise of the aluminum button on the frame make it easy to depress while also helping to reduce the chance of an unintentional release.

We also carried over some of everyone’s favorite features from the newest Smith & Wesson products in our assortment. The CSX pistol offers a highly desired flat-faced trigger with a trigger safety extending across the face of the trigger for a consistent feel. The CSX pistol features appropriately placed serrations on both the front and rear portions of the slide. The serrations on the rear portion of the slide feature a flared design for easier manipulation.

You should also watch Julie Golob run it down.

The original post was appropriately entitled Look, it’s not another M&P! and was made by u/RAMRODtheMASTER late in the day on 12/30/21 in the r/guns subreddit. In the text accompanying that post — which as of our initial writing was the only information available — advised the following:

Trigger has a short travel but mildly stiff break. Trigger pull overall is not bad. The reset is atrocious though. False reset then real reset. Hope that wears out.

Haven’t shot it but it feels great in the hand as well as solid.

Initial speculation that it uses Shield Plus magazines from another Reddit user was answered with, “Different mags, I tried.”

We now know the CSX takes proprietary magazines in either 10- or 12-round capacity.

Some of our crew will no doubt put hands on the CSX at SHOT Show 2022. We can give you some more feedback then.

You can find that original leak article here:

Smith & Wesson is well known for its large line pistols. They recently announced their newest pistol, the Smith & Wesson CSX pistol, chambered in 9mm. In the video below, Smith & Wesson team shooter Julie G talks through all the specs of the new pistol and why you will probably want one.

JulieG TV Youtube channel went through the new Smith & Wesson CSX pistol and she said she is stoked to share the information. She stressed that because she is a team shooter for Smith & Wesson, this is not a review but essentially an announcement for the pistol.

The new CSX pistol seems to fit the small niche hole between the full-sized Shield pistol and the Shield EZ. The CSX pistol is a nod to the old Chief Special pistol and is a micro-compact aluminum alloy frame pistol chambered in 9mm. The pistol is a striker-fired single-action pistol with lots of little touches that make it a versatile pistol.

The CSX pistol from Smith & Wesson, chambered in 9mm Luger, comes with a 3.1” barrel and the pistol is only 1.12” wide overall, including the controls. The main takeaway for the pistol has no grip safety but has ambidextrous safety. This ambi safety is smaller than the regular Shield but larger than the Shield EZ. Also present on the CSX is an ambidextrous low-profile steel slide stop that is accessible from both sides.

Continuing with her overview of the new Smith & Wesson CSX, Julie talked some more about the frame and grip. The CSX has a magazine release button on the left side of the frame, but they include the right-side button so left-handed shooters can swap it out to fit their needs.

The texture present on the button helps feel the button easy enough, but the button itself is not so big that you will accidentally hit it. Also, in the box from the factory is two interchangeable backstraps, one standard size and one a smaller size. The grip texture Julie says is nice for shooting and not too sharp on the hand. The texture also extends around on the front and back of the grip as well.

While the CSX is not optic-ready, it does have three-dot night sights. Also present on the slide is a loaded chamber indicator, which Julie loves, and serrations along the top to help reduce the glare to the shooter.

To round out the pistol announcement, Julie talked about the trigger. The trigger features a fully flat face, and the trigger safety extends across the full face giving it a smooth surface. The trigger feels crisp and consistent with not a lot of travel with the pull. Because of the presence of the internal firing pin block, she recommends that you practice maneuvering the thumb safety in your drills, so you are comfortable with the different feel.

Coming from the factory with two magazines, a 10-round and a 12-round magazine and sleeve, the Smith & Wesson CSX pistol is a versatile option for anyone looking for a micro-compact pistol. The MSRP for the CSX is $609. 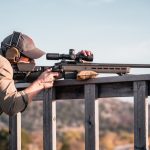 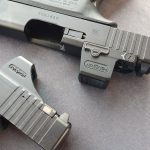