Join Travis Haley, former Recon Marine, as he helps us improve our draw and fire times with handguns on the range. In this video, he discusses training with deliberate practice.

Haley points out that when we go to the range, we usually practice things that we’re good at because it’s fun and motivational. We feel good about doing something we’re good at! However, when we look at a shooter going to the range and an expert shooter going to the range, there is a difference; Deliberate Practice. This means the expert realizes the skills he is not good at and concentrates on those skills. His practice will be based on the skills that he’s not good at and needs improvement. He can dissect and understand the items he needs to work on through self-diagnosis.

Many people look at experts and say, “I wish I could shoot like that guy.” Or, “I’ll never be as good as he is.” That is a mental flaw. People who think like that have already defeated themselves. Remember Roger Bannister? He is the first person credited with breaking the four-minute barrier of running the mile. Until he broke it, people “knew” that it was impossible to break that four-minute time, so they didn’t try to accomplish it. Interestingly, once Bannister broke it, several others followed suit. Why? Because now they realized, in their minds, that it could be done. Once their minds realized it could be done, they did it. The biggest battle is in mind.

If you think I don’t know if I’ll ever get there, wipe that slate clean. Replace that with, I’ll figure out how, and I will do this. Where you set, your mind is where it will go. This is Deliberate Practice. Understanding the fundamentals is paramount.

I’ve heard that advanced techniques are the basics that are done well, and I believe there’s a lot of truth to that. That’s how professionals become good; they practice the basics until they are reflexive.

Putting a magazine in a gun and firing as fast as possible is not deliberate practice; that’s getting ahead of our headlights; being self-aware means that we can diagnose our problems. Once we start self-diagnosing, we reach higher intelligence, and with that, we can then figure out what we need to do more or less and how to improve.

We all want to be fast and accurate with our draw, but we don’t want to miss any of the steps to achieve that speed and accuracy.

Travis sets a shot timer for five seconds. For the first drill, he’s not allowed to fire a shot for the first five seconds. When the timer sounds at the five-second mark, the pistol should be going off. During the five seconds, you’re working on fundamentals, and doing so slowly forces you to focus on those fundamentals rather than rushing through. Focus on getting a good grip, including good leverage, friction, and flexibility, proper sight alignment and sight picture, and make sure you’re getting a good trigger press and stance. And follow through on all those things. If you don’t already have these fundamentals down, this will help you achieve that. These things need to be ingrained at a subconscious level before you begin going faster.

Haley starts the first five-second drill off at ten yards and goes for a head shot to maximize accuracy. As soon as the timer goes off, he begins counting out loud backward from five to track how much time he has left mentally.

Next, Haley reduces the time to four seconds, the same drill. Again, attention is given to all the basics. He notes that each timed drill should be fired five to ten times before reducing the time to get the most out of the training.

Finally, he arrives at the two-second time limit for his drill, and he points out that this is the average time that is accepted that someone should be able to draw and land an accurate shot. He elaborates that this is not good enough because, in real life, time is life. Haley mentions that drawing and firing will probably feel like slow motion for you at two seconds because you’ve been slowly reducing your times and adjusting to them as you go.

Eventually, Haley ends up at a one-second time limit. Again, he mentions that one second should not feel overly restrictive because you’ve gradually reduced the seconds.

Long Day at the Range

After mastering the one-second time limit, he suggests reducing the time to one-tenth-second intervals. So after one second, you’d adjust to .90 seconds, and so on. Haley got down to .70 seconds but had a miss, which he self-diagnosed (the reason was that he did not get his arms to full extension before firing). He announced that he’d stay at .70 seconds for the afternoon because of the miss, and he wanted to master that time frame.

I’ll jump in here and note that his training was from an open carry configuration. Now that is useful if you carry in such a manner, possibly as a civilian or even uniformed personnel who carry openly in their job duties. However, if you’re a civilian who typically carries concealed, your training should be drawing from concealment to make things as realistic as possible. Practicing from an open draw and then carrying concealed leads to a conflict.

Haley states that starting at five seconds gives you a warmup, progressing downward in time so that the training would be gradual. He likens it to going to the gym; you wouldn’t throw on the heaviest weight right away; you’d gradually work up to it. After that, the basics become more deliberate and ingrained, and you’re eventually operating on a subconscious level.

All in all, a great video. The training doctrine of reducing the times is sound. Just remember to train as you will fight regarding carrying openly or concealed. 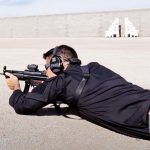