DeSantis Holsters has been turning out excellent holsters for close to 50 years, and they show no signs of slowing down. So I was excited
to try one of the offerings that they recently sent me.

The holster I received is called the Pegasus “Hidden Truth,”, and it is one of their Kydex offerings. This particular holster is especially suited
for Appendix Inside the Waist Band carry of pistols, which has become very popular with shooters in recent years. 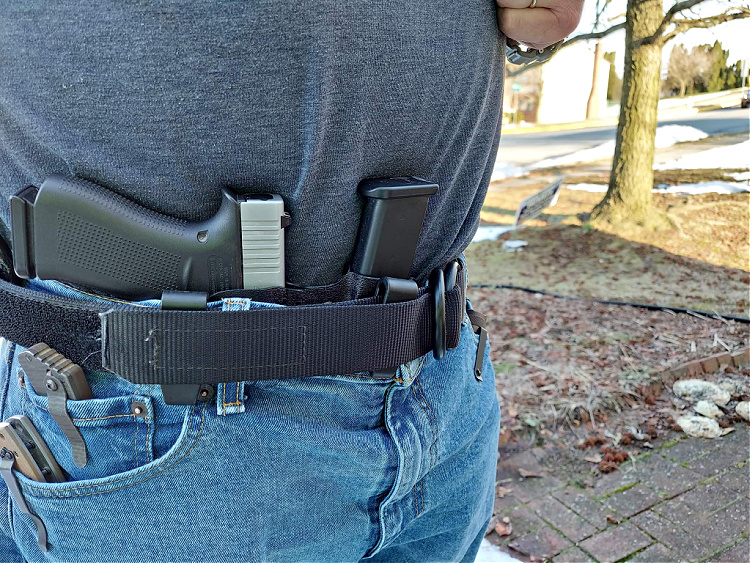 The holster keeps the pistol and magazine tucked in close to the body and secure.

Realizing that most concealed carriers also carry a spare magazine (or two) for their handguns, DeSantis has built-in a magazine pouch
right into this holster. As such, it is not a small unit, but rather one of the larger holsters that I’ve ever used. Because the spare magazine
pouch is located to the left of the holster, it is positioned nearly in the center of the shooter’s body, making it accessible by either hand. This central location also makes drawing that magazine faster during speed reloads, which is a major consideration during an unfriendly social encounter in which bullets might be flying.

Two Polymer clips secure the holster to the user’s belt, slipping right over it. They each have a tab on the bottom so the user can more
easily remove the clips over the belt when taking the holster off. Those little tabs really do help a lot, and are a thoughtful addition! Also, the angle of the clips can be adjusted to any desired cant, suiting any user’s preference. Adjustments can be made simply by loosening a screw on each clip and moving it to the desired angle. 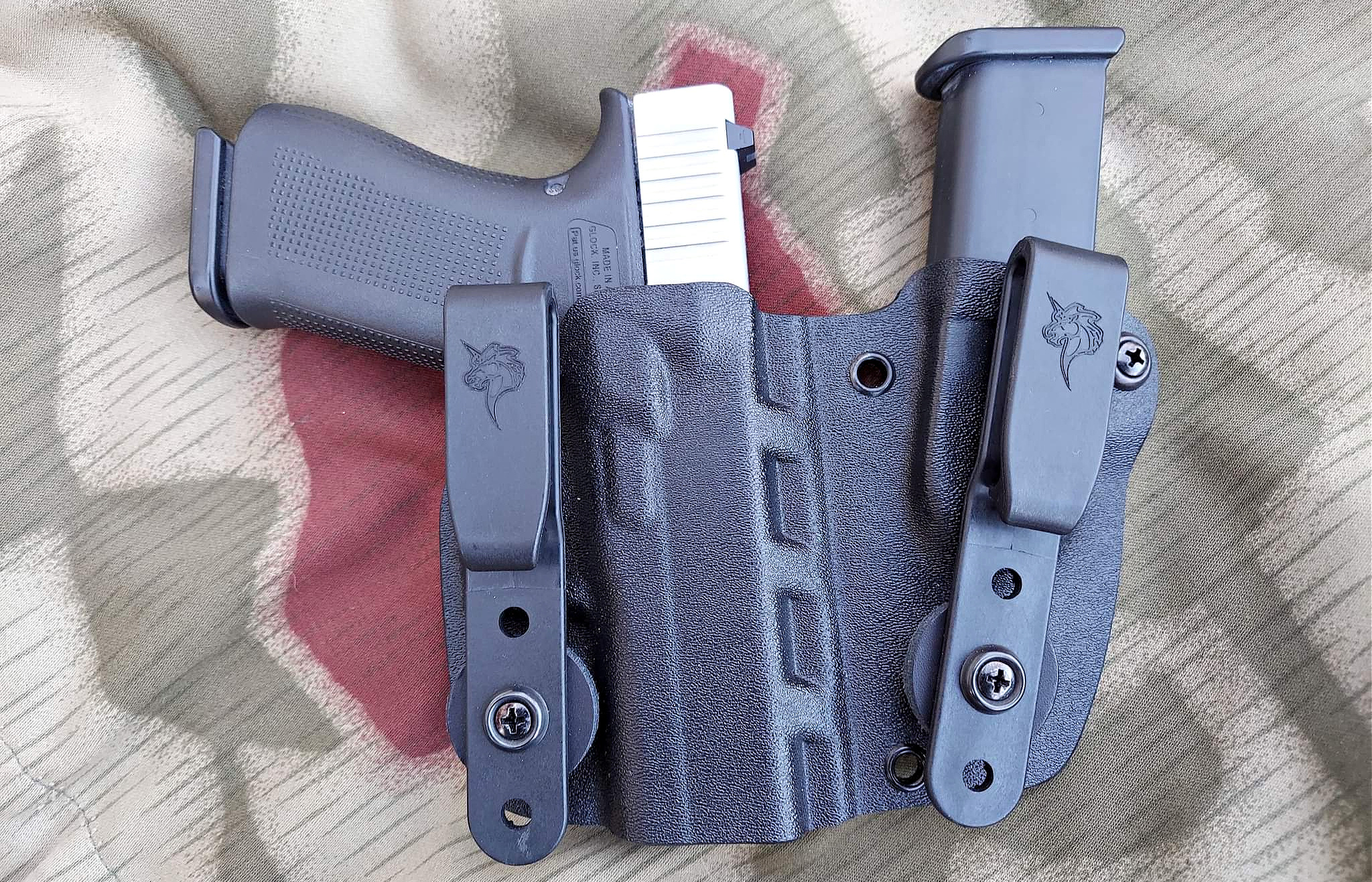 The clips can be adjusted to any angle that the user desires by loosening and tightening the screws. 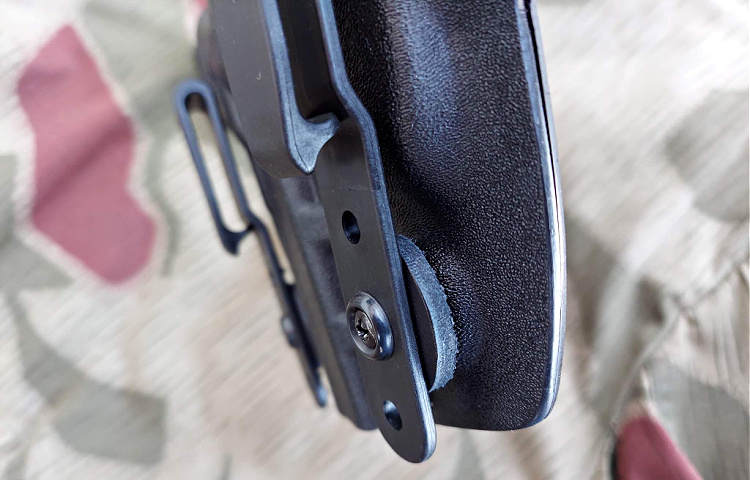 A closeup of the tabs on the bottom of the clips.

Tension on the magazine can also be adjusted via a screw on the side of the holster to suit the user’s needs.

When the firearm is inserted into the holster, there is an audible click as it locks in, which is satisfying. Of course, each holster is molded specifically to the type of firearm that it is intended for, so the fit is perfect, and the pistol is held very securely. This particular model has a
“sweat guard” that extends up a few inches, which creates a barrier between the pistol and your skin. 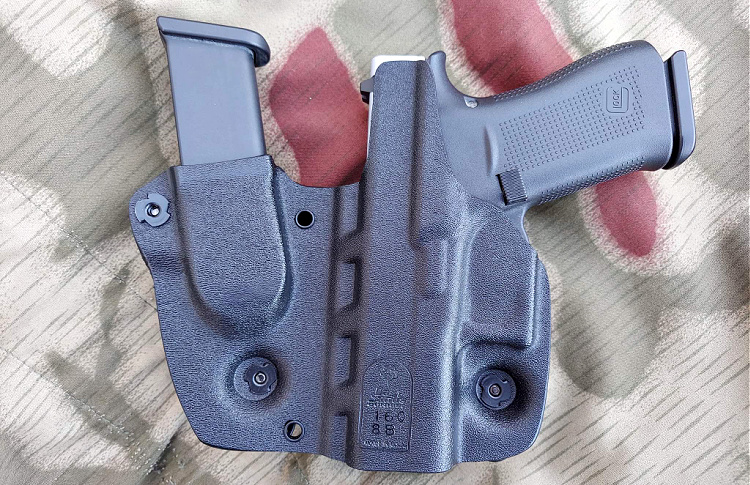 The portion of the rig that goes next to the body. Note the sweat guard, which shields the gun from the skin.

Incidentally, the pistol that I carried with this holster is the most excellent Glock 43X, which is currently my favorite carry pistol. It offers
the best balance of compactness, slimness, capacity, and shootability, in my opinion, of any pistols available at this time. It gets the job done without fanfare or nonsense and does it reliably.

For the past 30 or so years, I’ve used DeSantis holsters and been abundantly happy with their performance. Happily, I can announce that
this is still the case.

Personally, I prefer my holster and magazine carrier to be separate entities. The reason is that when they are combined, both entities become…well, one big entity! This holster/mag combo takes up a bit of real estate on the beltline.

Normally, (brace yourself for impending heresy) I carry two spare magazines, which I place into my back pocket. No, this method of carry
does not allow as fast a draw for spare mags as a belt carrier. Why do I carry in such a crude, un-tactical manner? For years, I carried everything but the kitchen sink on a duty belt on the job, and frankly, am not a fan of doing that in civilian clothing.

I can grab a mag out of that pocket fairly quickly, and they carry flat, so I don’t worry about them flipping around so that they come out
the same way consistently each time. For me, it just works, and there’s less crap on my belt line to get in the way.

The holster keeps the pistol and magazine tucked in close to the body and secure.

So how did this holster/mag combo work for me?

It was surprisingly comfortable! Actually, far more comfortable than I had anticipated when I initially saw it. At first sight, my thought was, what a monstrosity! But my concerns were unfounded, as the holster worked just fine, was comfortable, and allowed me to access my pistol and a magazine quickly while keeping the whole setup secure. What more can you ask for in a holster?

Well…there is one more thing. It does all of the above for a retail of $59.99, (at the time of this writing). Which means you can pick it up for even less than that at dealers. That’s a good deal in my book and makes it easier to outfit yourself with a high-quality holster. And the holsters from DeSantis are at least as good as any others I’ve used from other makers, and usually better than the others.

Jim Davis served in the PA Dept. of Corrections for 16 ½ years as a corrections officer in the State Correctional Institute at Graterford and later at SCI Phoenix. He served on the Corrections Emergency Response Team (CERT), several of those years as a sniper, and also the Fire Emergency Response Team (FERT). For 25 years, he was a professional instructor, teaching topics including Defensive Tactics, Riot Control and Tactical Operations, Immediate Responder, and cognitive programs as an adjunct instructor at the DOC Training Academy. He was then promoted to the title of corrections counselor, where he ran a caseload and facilitated cognitive therapy classes to inmates. His total service time was close to 29 years. He was involved in many violent encounters on duty, including incidents of fatalities. 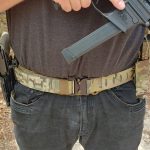 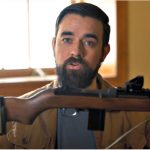