In the real world, we sometimes may need to manipulate our weapons with one hand due to an injury, or possibly our hand being occupied doing something else, such as opening a door, holding a child, or any number of activities. Sure, we like to think that Murphy’s Law won’t show up to take a giant dump on us, but that’s what Mr. Murphy does best. We also like to think that our favorite blaster would never experience a stoppage at the Moment of Truth, but guess what…yeah, Murphy. He’s a prick. Make no mistake, if we’re in a lethal force encounter, our weapon is having a stoppage, and we’re down to one arm, we are, most assuredly, having a bad day at the office. A while back, a friend (we used to go to different schools together) had it happen to him.

But I digress. In the video below, Daniel Shaw walks us through some one-handed manipulation drills to clear a double-feed with one paw. A double-feed just means that there’s a round in your pistol’s chamber and it’s trying to feed another round in there, which we know is not a good thing.

The first priority is to get that magazine out of the pistol.

Another possibility is to hit the mag release, raise the gun up, then bring it down quickly, letting inertia strip the magazine out of the mag well. The more rounds in your magazine, the better because it will weigh more and eject more easily. A variation of that one is to hit your forearm against your thigh while holding the pistol and pressing the magazine release, which will hopefully eject the magazine. Don’t hit your forearm against your knee cap because it can render your arm useless.

When you’ve ejected the magazine, rack the slide a few times on your holster’s edge (or anything solid that you can manage) to clear the chamber.

Now you need to reload the pistol.

But where to put it to reload with one hand? You could place it into your holster or set it on the ground next to your foot (you can insert the magazine while pushing it against your foot to hold it in place while the magazine goes in). Also putting the pistol into your armpit might be an option, as is pinching it behind your knee between the thigh and calf.

You do have at least one spare magazine, don’t you??? Let’s hope so.

Rack the slide to chamber a round.

If the pistol is behind your knee, you can rack it there, or bring it out and rack it on the side of your leg. Other options are to catch the sights on your belt, holster, the sole of your shoe, or anything solid nearby. Note that Daniel does not advocate racking the slide on the sole of your shoe because that places it far away from where the threat is, pointing it in the opposite direction of where it needs to be pointed.

These are excellent skills to possess, and I completely advocate developing them. Stuff happens, it pays to be prepared. 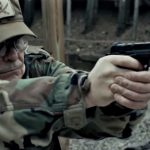 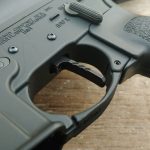