One of the reasons we love the AR platform is because it’s so customizable. If you have an issue with your factory AR or just want to upgrade it, there are aftermarket accessories for almost everything. And if you have an AR-10, you might have found yourself wishing you could make the bolt catch more user-friendly. That’s where this Strike Industries Bolt Catch – specifically, their Enhanced AR10 Bolt Catch – comes in handy.

The Strike AR-10 Enhanced Bolt Catch is another piece in the SI line of high quality parts for the AR-10 market. This SI Enhanced Bolt Catch (EBC) features an extra wide bolt catch lower lever surface and grooves for added grip which helps make its operation effortless. The widened bolt catch lower lever assists in the manual locking of the bolt carrier group (BCG) to the rear. The solid construction and clean matte black finish make it a great looking replacement or an essential pick for a new build project. Looking for a great value with better functionality, add some SI style and look no further than the Strike AR-10 Enhanced Bolt Catch.

Features of the Strike Industries AR-10 Extended Bolt Catch include an extra wide surface area for smoother operation even while wearing gloves and a ping pong paddle design for speed. The lower lever itself on the bolt catch is also wider to facilitate manually locking the BCG to the rear. In addition, the bolt catch has raised grooves for a better hold, solid steel construction, and a sleek aesthetic.

Replacing the factory bolt catch in your AR-10 with this aftermarket product from Strike Industries is relatively simple and does not necessarily require a gunsmith. The bolt catch is a common source of frustration for many AR owners, so why not make yours simpler to use? From its durable construction to its enhanced features, this is a bolt catch that’s made for serious shooters.

Do you have an extended bolt catch on your AR? Tell us about it in the comments. 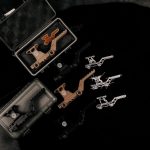 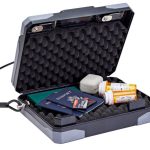