Shotguns are often called a thinking man’s weapon, and I tend to agree with that saying. The thing is, the thinking part doesn’t come in the middle of a gunfight. It comes in the preparation of your home defense shotgun and for a gunfight that might or might not ever come. Part of that planning ahead and thinking is choosing the proper ammunition type. One of the most reputable and widely used rounds in defensive shotguns is Federal Flitecontrol.

These brakes deploy, and this is what separates the pellets from a load of buckshot. Because the pellets stay together longer, they produce a tighter, more effective pattern at typical shotgun ranges. Now that we know how the Flitecontrol loads work let’s discuss why shotguns are such efficient fight stoppers.

The Flitecontrol loads are 2.75-inch shells loaded with either nine or eight pellets of 00 buckshot. These shells used to come in Number 1 buck, but those are sadly long gone. The Flitecontrol loads deliver a handful of .33 caliber projectiles all at once, which can absolutely stop a threat with a single pull of the trigger. Each of these pellets weighs approximately 53 grains which means each shell delivers over 400 grains of lead per trigger pull.

The Flitecontrol shot cup delivers that load in a very tight pattern. The reason a tight pattern is so desirable is something called pellet accountability. Each one of those 53-grain pellets has the potential to kill a person, so when shooting a shotgun, you want to ensure every pellet hits the threat. A single stray pellet could harm or kill a loved one. Loads like Flitecontrol make it very difficult to have stray pellets.

That’s where the value of Flitecontrol lies—in total pellet accountability. At least, that is where the value lies for those using shotguns for home defense. From a duty perspective, the Flitecontrol loads offer a greater effective range. They can reach out and hit threats beyond your typical shotgun range. For home defense, we are likely dealing with shots at a mere 10 yards, so the range isn’t a major concern.

Performance At the Range

The Federal Flitecontrol loads are tactical loads designed to reduce recoil. The velocity is 1,145 feet per second, and that’s fairly soft and slow from a shotgun. The brass is lowish, so I wanted to see how it would function in some semi-auto shotguns. I grabbed my Mossberg 930 SPX and Benelli M4 and hit the range.

The rounds ran perfectly fine in both semi-auto shotguns. They fired flawlessly and had zero issues cycling in either gun—not bad for low recoil loads in shotguns. Speaking of, the load and the recoil it delivers are surprisingly very controllable, even in a pump action shotgun.

Now, while the load handles exceptionally well and works without complaint in semi-auto shotguns, Flitecontrol really shines in how tight it remains when it strikes a target. Let’s step it off to 10, 15, and 25 yards and see exactly where the load of buckshot falls.

At ten yards, Flitecontrol acts like a slug. When it strikes the target, it’s indistinguishable from a single large projectile. This kind of reduced spread ensures total and complete pellet accountability.

At fifteen yards, things haven’t changed much. It’s still a big slug that acts like one massive projectile when it hits the target. Seeing as how most home defensive shots will be well under 15 yards, the tight pattern Flitecontrol offers is perfect for home defense work.

Let’s get a little crazy with it. Just for fun, we’ll move all the way back to 25 yards and square up with our target. In a duty situation, a 25-yard shot is a real possibility, so what happens if we take the Flitecontrol load out to the 25-yard line?

We still see superior performance. It might not resemble a solid projectile at 25 yards, but the pattern is still smaller than my hand.

Just for fun, here is the spread your average load of buckshot delivers at 10 yards.

Bill Burr has a great joke about buying a shotgun, and the clerk constantly says the phrase, “It’s got good spread!” Admittedly there are situations where a wider spread can be handy, but they aren’t likely to be CONUS. The spread of a common load of buckshot offers allows you to hit a running target or to hit a target in low-light situations.

Those are great advantages if you are in Fallujah and the ROEs are fairly loose. Here in the United States, playing fast and loose with your pellet accountability is a great way to hurt someone innocent. In some situations, it’s beneficial, but for the home defender, a wide spread isn’t that handy.

When a load of Flitecontrol hits an attacker, it will still spread inside their body and create a very undesirable situation for a home invader. The pellets will travel through the body and likely hit something vital enough to stop the fight.

A Word on Chokes

You should always pattern your ammo and load with your desired shotgun at your desired range. However, if your gun has anything other than a cylinder choke, the Flitecontrol load might not perform very well. In fact, it will likely mess with the Flitecontrol shot cup and cause the load to spread unpredictably. This shot cup and load are designed for a cylinder-bore shotgun.

Since most tactical shotguns are cylinder-bore guns, this isn’t a big deal. I think the performance advantage of the Flitecontrol load is clear. It’s capable, clings tight, and delivers unbeatable performance. I’m confident in saying this is the best buckshot load on the market for defensive use. 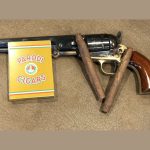