Choosing defensive loads for your carry gun can be daunting. There are endless options on the ammunition market even when you’re only after one specific caliber. Of the popular choices, there’s a newcomer in 2022: 30 Super Carry. This cartridge was designed by Federal Premium as a niche defensive option to compete with 9mm and other well-known rounds. Quite a few firearms manufacturers are making guns chambered in the new cartridge, including Nighthawk Custom and Smith and Wesson, and if you intend to use yours for self-defense purposes, Federal has ammo for that: Federal Premium HST in 30 Super Carry.

The Federal Premium 30 Super Carry 100 grain HST is made for impressive results despite its smaller size. It far outdoes 380 ACP for penetration, even through barriers, and even delivers ballistically on par with 9mm in some ways. For example, 99 grain 380 ACP HST produces 223 foot-pounds of muzzle energy, and 100 grain 30 Super Carry HST has a muzzle energy of 347 foot-pounds. 124 grain 9mm HST’s muzzle energy is 364 foot-pounds. Testing and research carried out by the manufacturer show the cartridge is a legitimate contender for its own place in the defensive world.

Check out the chart below to get a better idea of the various caliber’s penetration:

Federal’s Senior Director of Product Management, Jesse Whiteside, had the following to say about the load: “We are excited to add this new HST Personal Defense handgun load to our overall lineup. A big advantage of the 30 Super Carry is that users get more performance from this offering without having to step up to a larger firearm. The 30 Super Carry can hold 12 to 13 rounds in a magazine similar to the size of a 10-round 9mm Luger. Combine these performance features with Federals’ proven HST bullet, and this creates an excellent self-defense option.”

This ammunition is designed to deliver superior penetration and consistent performance which are vital factors in defensive ammunition. 30 Super Carry also gives gun owners greater magazine capacity without significantly more weight in the gun being carried. In the past, gun owners have been forced to choose between smaller pistols with less than ideal defensive performance or bigger guns that deliver better results but weigh a lot more. According to Federal Premium, the 30 Super Carry has terminal performance greater than that of a 380 ACP and muzzle energy equal to 9mm, all coming from a .312-inch projectile. The ammo maker states gun owners can expect results similar to 9mm, only with a bit less felt recoil and better magazine capacity. 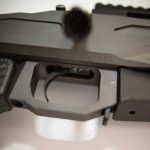