Heckler and Koch is well known for their high-quality firearms, and their PDWs (Personal Defense Weapons) are no different. In this video review, Ian of Forgotten Weapons discusses the HK MP7 — specifically, the MP7A1 and MP7A2 — going over their various features and, of course, their history. If you’re into gun history, there’s no YouTube channel better than Forgotten Weapons to teach you more. And even if you aren’t into it, you’ll be into this, because HK PDWs are awesome.

How Does the MP7 Work?

One of the things Ian gets into right away is how the HK MP7 compares to other military chamberings:

“Let’s dive into how exactly the MP7 works, because its significantly more complex than FN’s P90 [which is a select-fire PDW carbine designed in the 1980s, chambered in 5.7x28mm, with a 50-round capacity].

“…let’s start with a cartridge comparison. There’s our magazine, and…a 5.56 NATO cartridge. Here’s the 4.6x30mm HK cartridge [which the MP7 is chambered in]. …ballistically, there are a number of different loadings for it, but it is essentially 31 grains of bullet — typically armor-piercing bullet because that’s what it was designed for — traveling at about 2350 to maybe 2400 feet per second, depending on the loading. I will point out, for the sake of comparison…FN’s 5.7x28mm cartridge…[has] virtually identical ballistics on paper — 31 grain bullet at 2350 feet per second. …they are not identical, because they do have different performance, largely because of the different bullet diameters and construction. …they are [also] both substantially smaller than the 5.56 NATO.”

Ian states “One of the things that I find really interesting is the P90 is kind of a study in unorthodox design decisions, and the MP7 is exactly the opposite. [The MP7] is a really clever engineering attempt and success at taking all of the existing orthodoxy of firearms controls and design, and shrinking them into a very compact, very lightweight, and controllable package. So when it comes to the controls [of the MP7] this all duplicates exactly what we’re used to seeing on typical…military firearms. …the P90 is almost all very unusual controls.”

Interested in learning more about the MP7? Check out the video below:

“The MP7 is extremely compact, lightweight, can be used in very confined spaces, and is practically recoil-free. It can be carried continuously, making it the ideal personal weapon for the soldier of today. Those who carry it will be suitably armed for the broadest range of operations.

Comparing the calibres, the penetration and terminal effects of the 4.6 mm x 30 cartridge are several times those of the standardised 9 mm x 19 cartridge. By way of illustration: The new high-performance calibre penetrates the NATO CRISAT TARGET (1.6 mm titanium and 20 layers of kevlar) even at 200 m. One fundamental requirement: At the same time, the risk of overpenetration is reduced to a minimum.”

It’s impossible to deny this is a cool gun.

Do you have a PDW? Tell us about it in the comments below. 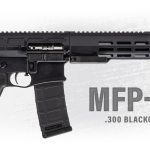 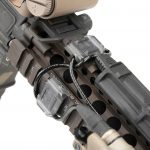