The Tomorrow War, like many 2020/2021 movies, was meant to go to movie theatres but was forced to stream by COVID 19. Amazon picked the flick up, and the film premiered July 2nd, 2021 and has properly started the summer popcorn movie season. As you can expect from a sci-fi action flick, there are a wide array of firearms involved. In this article we’ll be looking at the guns of Tomorrow War.

The film has a pretty solid premise. Chris Pratt plays Dan, a former ‘Special Ops’ soldier who led ‘combat missions in Iraq’. He’s now a high school teacher and family man with a smart daughter and a lovely wife. In the midst of the world cup, a group of time travelers from the year 2051 pop onto the field.

They are there to inform the people of 2022 that in 2051 humanity is losing a war to a species of aliens. They’ve come back because they need fighting forces to aid in the fight to prevent humanity’s extinction. Thus the Tomorrow War starts.

If you don’t want spoilers, I recommend tuning out now. There are two things I can’t do: I can’t speak without cursing, and I can’t review a movie without spoiling it.

I do appreciate that the movie cruises past the first act and dives headfirst into the action. It moves at a decent speed, and we see details of the civilian draft. After Dan gets his draft notice, he goes to his estranged shady criminal type father, played by a ripped and awesome J.K. Simmons, to get out of it. J.K. Simmons, by the way, also wields a Desert Eagle 50 caliber pistol, name-checked by Dan.

After some tense family drama, Dan calls him a coward, has self-realization, and decides he’s gonna go fight. He visits his family, and he grabs what appears to be a railed 1911 with a Surefire X300U before he goes.

He reports to basic training (or something like it), then we found out a tour of duty is seven days. If he’s still alive on day 7, he’ll be shot back to the past.

Like any time travel movie, the Tomorrow War explains the mechanics of time travel but doesn’t get too deep in the weeds on it. The explanation works, and though I’m sure it wouldn’t stand up to scrutiny, it does establish the movie’s rules.

Guns of the Tomorrow War

Here we also see our first glance at the future rifles of the Tomorrow War. They are short-barreled, fully automatic AR-type rifles fitted with Hera CQR stocks and foregrips. These things made a splash a few years back for their futuristic stylings.

In no time at all, and with no real training to speak of, Dan’s group of mostly civilians is transported to the future. Everyone gets their issue of Hera CQR equipped rifles and a whole loadout of PMAGs — except of course for badass Tomorrow War veteran Dorian.

He carries a slick Beretta 1301 tricked out with Aridus gear for his third tour alongside a souvenir spike from what was reportedly the first whitepsike killed.

After a disastrous landing, we get a better look at the guns and gear. The Hera CQR rifles are equipped with ACOGS and Inforce lights as well as offset red dot sights. In 2051 this gear makes little sense.

They establish that precision shots to the belly or neck are required to kill the bad guys in one of the very short training scenes. Why use an ACOG over an LPVO? Also, Inforce lights are not superbly powerful compared to modern options like the Cloud Defensive Rein, and heck, if they want a 12 0’clock light go with the OWL.

On the other hand, Dorian’s 1301 is a very modern fighting shotgun. It still wears an Inforce light but rocks Aridus Industries upgrades in the form of the Magpul Zhukov handguard adapter and Magpul SGA adapter and what could possibly be the Crom mount for the Aimpoint T-2 he’s using. Dorian even rocks some shotgun shell caddies for the three-gun world for his reloads.

Once the poop hits the fan, we get treated to one of the best creature reveals I’ve ever seen. The first time you see a white spike in the light of an Inforce, it’s a creepy experience. Prior to that, we knew what they were called, but not much more.

Most of Dan and Dorian’s force is quickly slaughtered by White Spikes. We see Dan and Dorian team up to use his 1301 to great effect, but in general, their rifles are mostly useless. It’s quite clear they need different, more powerful rifles to deal with this threat.

Their 5.56 peashooters have the same effect as a spitball on the monsters unless they hit them in the neck or belly. 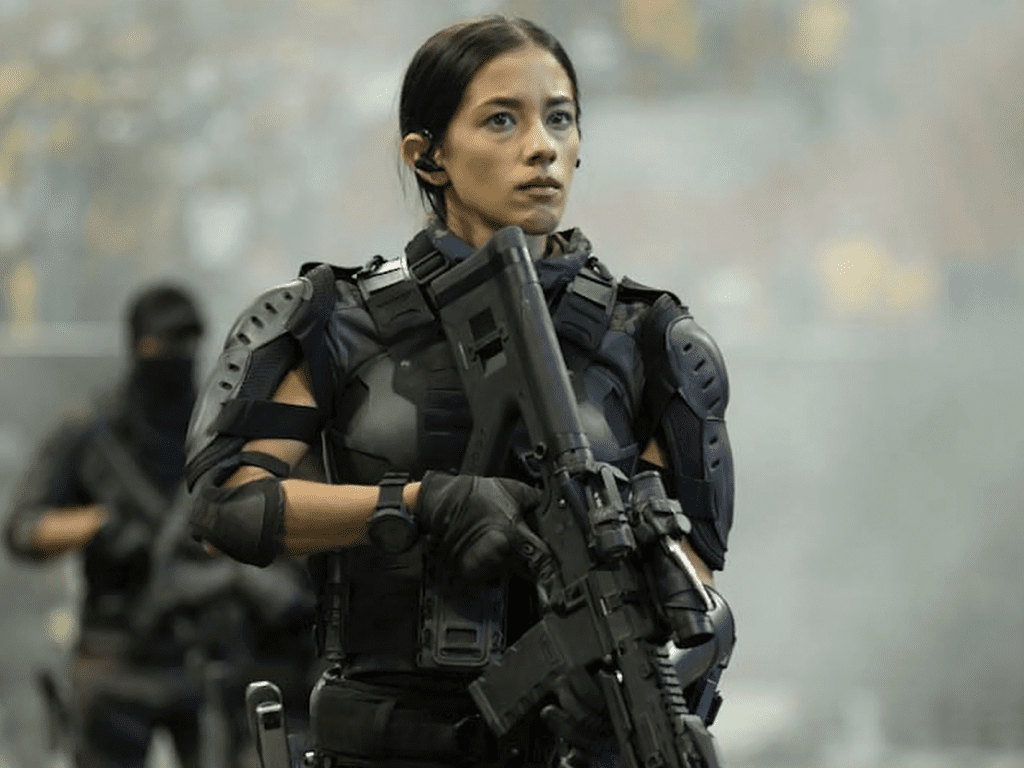 Warning: If you want any form of realistic action, then this movie doesn’t pack it.

Sure, Pratt and Dorian aim their guns, and most of the untrained civilians blind fire erratically. Pratt moves well with a gun and looks comfortable with it. Beyond that, there are no squad tactics, fire discipline, or real common-sense decisions. In a scene where they are trying to be stealthy, they shine their Inforce lights around with zero light discipline.

Just get an LPVO

They fight an enemy that requires precise shots to be taken but constantly just spray full auto fire at them. Also, like a 1980s action flick, there isn’t a single reload. From here, Dan and what’s left of his team are rescued, and they go to the Dominican Republic. There Dan meets — the big reveal! — his daughter from the future.

Anywho, beyond that, Dan has been brought by his colonel daughter to help her solve the White Spike issue forever. She needs his help to secure a Queen White Spike and develop a toxin that will kill it and other females.

He gets geared up in Multicam black, an actual plate carrier, and another Hera CQR rifle.

Periodically one of the shooters in a helo will drop a line and zip down to join the soldiers trying to capture the queen…presumably to ensure there enough bodies there for her to mangle and destroy, but not quite enough to subdue her.

Muri takes charge. While she brought him to help, she — the commander of the operation, and as we soon learn the critical White Spike researcher — tells him to stay in the helicopter while she personally fast-ropes down through the target sphincter into the queen’s lair.

There she essentially goes to fisticuffs with the alien, then gets mad later because he left the helicopter to save her and help secure the queen.

So why did she bring him?

Here is where we find out that the most efficient weapon to fight White Spikes in The Tomorrow War is the same gun that’s turned the enemies of America into pink goo for well over a century: the M2 50 caliber machine gun.

Add that in with suitable plot armor and we quickly see Dan and his daughter massacring White Spikes while they flee from the hive.

But…if this gun works so well, why the hell wouldn’t you bring all of them from the past to the future?

Use them for every operation you embark on. It shreds these critters to pieces!

From there, they go to a lab, and we see science stuff, MRE jokes, more family drama, and finally, success. Dan’s daughter succeeds and has developed the toxin. Of course, now the heavily sedated queen awakens, and the research facility becomes swarmed by endless male white spikes.

That gives us the opportunity to see some Phalanx CWIS miniguns lighting em up, rampaging helicopters, talking 50 cals, and more. It’s a fun scene.

The Colonel wants Dan to take the toxin to the past and use it to prevent the Tomorrow War from ever happening. He doesn’t want to leave her, drama ensues, they lose the facility, and right before Dan dies, his timer runs out, and he’s transported back to the past, toxin in hand.

Here’s where I get frustrated with the plot. He tells one person he has the toxin, and he needs to go back and kill the beasts in the future. The time machine is destroyed, and he can’t. No one seems to care that he has a toxin that can stop the event from ever happening. Why governments would instantly begin mass-producing the toxin for deployment for when the aliens arrive is beyond me.

But maybe that shouldn’t be a frustration. What the government does in real life is often beyond me.

Anyway, he goes home, and family reunification occurs. He and his wife figure out that the aliens, who supposedly land in Russia in the future, never landed at all. They were already there. A joke about a volcano-obsessed student pays off, and it turns out Global Warming melting the ice caps is what freed these frozen creatures.

How do you get to Russia when global communities are falling apart? Well, you need a criminal with a plane. What criminal do we know? Dan’s dad, of course! The old man agrees to fly Dan, his funny sidekick, Dorian, and some of the soldiers from the future trapped in the past.

Now our troops are armed with more traditional M4s fitted with red dots, PEQ 15s, and lights I couldn’t identify. J.K. Simmons arms himself with a scoped AR 10. We also see a Glock in a single scene.

Everything goes wrong, and the final fight scene begins. Dorian goes out like a gangster, and Dan, his Dad, and funny sidekick are left. J.K. Simmon’s AR 10 proves that 308 would be the better choice for killing white spikes than AR 15s and M4s. His more powerful rifle has a more notable effect.

A final battle with the final queen has the movie reaching Fast and Furious levels of ridiculous (which, in the context of the flick, is not a Bad Thing). In the end, Chris Pratt’s in a nice fight with the queen.

Good guys win, go home, Dan and Dad are bros, and everyone lives happily ever after.

The Tomorrow War is a fun summer flick. It has an original plot but lives on tropes. I will say the twist at the end was a good one that opened up more questions about the universe they live in. It has a sudden, satisfying turn that keeps the main plot from being predictable (unlike the emotional ploys, which are all too much so).

The Tomorrow War doesn’t deliver well on firearms or tactics. Outside of the Beretta 1301, none of the guns of Tomorrow War stick out as cool to me as a gun guy. No impressive gun handling or tactics applied, no light discipline, and nary a reload in sight. If you’re okay with that, though, and don’t mind turning your cerebral tacticalortex off, it’s a fun flick.

Read more about The Tomorrow War on the Internet Movie Data Base. 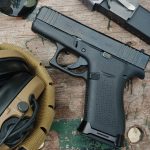 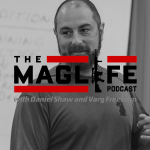