The Rough Rider Black Tactical Cowboy is a single-action revolver chambered in 22 LR, making it both fun and affordable to shoot. It has a 6.5-inch barrel, an overall length of 11.85 inches, and an empty weight of 32.10 ounces.

This is a reasonably lightweight, well-made gun designed to bring the best of both old and new features, to the single-action shooting world. Its overall design is Heritage Firearm’s Rough Rider style, but it has quite a few modernized, tactical features as well. For example, the revolver has a Picatinny rail so a red dot sight can easily be mounted to the gun, and the grips are black carbon fiber. The barrel is also threaded so shooters have the option of adding aftermarket accessories such as compensators.

Heritage Firearms had the following to say about their Rough Rider Black Tactical Cowboy revolver:

For making tin cans dance in the backyard, pinging steel, or controlling pests and varmints around the farm, nothing beats the low-cost, high-adrenaline thrill of a single-action rimfire revolver. The Heritage Rough Rider handguns are built with numerous grip options and feature the same classic profile and precision. Chambered in 22 LR, is also compatible with the 22WMR cylinder allowing you to shoot either 22 LR or 22 WMR ammo. The new Heritage Rough Rider Tactical Cowboy features modern day technology into an old clasic world. The barrel is threaded for accessories like compensators and supressors. The picatinny rail allows the user to add different optics if desired, but also works as a rear open sight to be used with the bright front fiber optic sight.

22 LR single-action revolvers make a nice addition to anyone’s gun collection and the updated features on this gun make it even more user-friendly. The Rough Rider Black Tactical Cowboy from Heritage Firearms is a great way to get into the world of reproduction revolvers but also serves as a fun new gun for longtime revolver shooters. 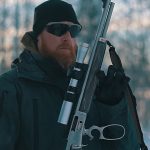 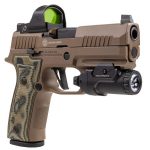