Everyone wants to get better at shooting. Even people who have been shooting for years are always working on some aspect with drills. Jeremy Stone, a newer shooter, and Daniel Shaw, GunMag’s resident gun expert, go through how to shoot better in under 15 minutes. In the video are tips to help any shooter become a faster, safe, and more accurate shooter.

Quick Tips to be a better shot:

Jeremy Stone is a wrong-handed shooter and has been struggling with consistent shooting as a new shooter. Daniel Shaw is there to help point out what he was doing wrong and how to fix the problems. Daniel starts out by saying that dry-fire work is a great way to start, with the focus being on the trigger press to avoid moving the gun.

Daniel says that most times new shooters can get the first few shots on target and then the shots start to drift. This problem is mostly attributed to moving the gun while pressing the trigger and meeting recoil. His goal is to have shooters recognize what it takes to make a perfect shot and to recognize what it feels like when it isn’t a perfect shot. The difference will be a game changer.

Starting off, Jeremy’s stance is super tense all around with a narrow stance in his feet. Daniel points out that the gun doesn’t care how it is held, it will work regardless. But the grip is vitally important to a perfect shot.

For a proper grip, you want to get the handgun in line with your arm if your hand size will allow it. The recoil action should happen at the wrist and nowhere else. The thumb on your non-firing hand should be pointed towards the target. The webbing of your non-firing hand acts as a splint to compensate for the recoil.

Your arms should not be locked out but bent just a little, with the pistol aligned with the midline of the body. The elbows should be rotated out slightly with shoulders down and back. Lean into the firearm at the waist with your shoulders back and elbows bent to allow for recoil absorption in your body. The absorption of recoil helps decrease split times between shots and get your next shot off faster.

Daniel points out that there are different opinions about the proper way to pull the trigger and finger placement. For him, letting the finger fall naturally on the trigger is best. The muscle memory of doing that will help in moments when the shooter needs it. When shooting, articulate the finger without moving anything else.

Jeremy takes some shots following Daniel’s advice. He has a couple of good shots, showing that he knows how to properly aim the pistol, but the next few shots are off. Daniel says that most new shooters get their first few shots on target, but that is because they hadn’t met recoil yet. Once they experience recoil, the shots start to dive and the body compensates. Daniel states that the best way to counteract that is to get to know your trigger.

Getting to know the trigger of the pistol is vital for accurate shooting. You need to know exactly how much pressure you need to use to move the trigger. His example is that you don’t need to use 27 lbs of pressure on a 5 lbs. trigger, and a slow and methodical trigger is best. You can do this by slowly taking up pressure on the trigger, a little at a time, to the wall and a methodical pull to break and fire.

Jeremy shoots again and is better this time, but still needs improvement. His non-firing hand was needing to be adjusted after each shot. The non-firing hand is further away from the body and easier for that elbow to get locked out. Daniel reminds him that both elbows need to be bent to ensure that the gun doesn’t jump out of his non-shooting hand.

To practice these steps, Daniel shows a good drill to do on the range with a buddy. The buddy would safely set up the pistol for the shooter. The shooter would safely take possession of the pistol and act like it was a dry fire for each shot, regardless of whether the buddy set it up as a dry fire or live fire. This acts like a real demonstration of what the shooter is doing or what they need to work on. This can be done alone by the shooter with one round per magazine and alternating between live and dry firing.

Daniel wraps up this video by saying that you need to point the gun where you want the round to go, and fire without moving the gun as well. These two things will get the accuracy you want. He encourages new shooters to not get discouraged and to keep practicing. 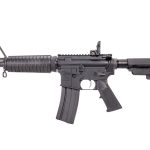 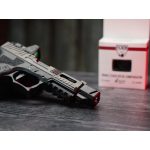