In the caliber wars, everyone has their opinion, from the guys who like 9x19mm because it was good enough for John McClane and Martin Riggs to those who carry a .45 only because they don’t make a .46. I know several guys who carry a .380 and I hear there are even some .40 S&W holdouts around. That doesn’t even count the revolver guys. As far as fanboys go, Riggs was directly responsible for my lusting after and eventually purchasing a Beretta 92. Don’t judge me.

What lots of folks, especially new shooters, don’t realize is that deciding on a caliber is only the first step. Since this isn’t an in-depth discussion of the ins and outs of ammo selection, I’ll skim over that. Suffice it to say that you have to do your homework if you’re going to get the performance you want from your gun in the role for which it’s intended.

In light of this, Paul Harrell gives us a practical demonstration of how 9x19mm full metal jacket ammo does not all perform the same, or even necessarily how it’s advertised.

Like this overview, Paul’s video is not a deep dive into the subject. It is meant to illustrate the point of its title. I took it as a tool for folks who are still learning about being a gun owner to better inform themselves, but it’s good info for all of us.

Paul warns upfront that the topic is kind of dry—and he’s not wrong. It’s mostly him shooting eight different brands of 115-grain 9x19mm FMJ rounds through a chronometer for velocity and then from a bench for accuracy. He uses a Sig M17 for the tests. Paul then compares the results from both tests.

It’s not scientific, but rather a couple of practical tests from a highly experienced shooter. Again, the purpose is to show the admittedly surprising results that demonstrate how different brands, and even different batches, can show significant performance disparities.

9x19mm brands used in this test:

As noted, each is 115-grain FMJ 9x19mm. Only the Fiocchi listed the velocity on the box: 1200 feet per second. Paul fires six or seven rounds of each through the chronometer, gets a mean number for each, and measures the variance.

What jumped out at me was the difference in variance from the mean velocities. I don’t know about you, but I value consistency more than raw performance once a certain level has been reached. For instance, the Blazer Brass wasn’t the highest in terms of velocity, but it was the most consistent.

I’ll admit that I was surprised by the consistency of the Winchester White Box ammo. That doesn’t reflect my perceived experience with that particular variety, and Paul echoes that sentiment. Maybe it was a good batch.

The Speer Lawman was the clear winner in outright velocity, but was among the most inconsistent, being second only to the Geco. Also surprising was the utter failure of the Fiocchi, a brand I generally like, to live up to its billing. Not only did it not approach the advertised velocity of 1,200 fps, but it was also only slightly better than average consistency-wise.

Now, that is all well and good, but accuracy is where the rubber meets the road. Let’s be honest, no matter how invested we are in a particular caliber (or not), most of us understand that shot placement is king. We obviously have to do our part on the training side, but consistently accurate ammo is a big part of the equation. It has a direct influence on how well we train as well as getting the job done if we find ourselves in a bad situation. Knowing the ammo will do its job if you do yours builds confidence. And since this test deals with what most of us consider training ammo, this is absolutely relevant to improving our skills.

Again, the footage is of the targets as Paul fires six-round groups from a bench at 25 yards. Each brand gets its own target. There’s not a whole lot to say, other than some held their groups better than others.

Geco was clearly the worst—not surprising since it was also the least consistent in the velocity test. What I did find a bit surprising was the good performance of the Blazer Brass, especially coupled with what it did velocity-wise. That has not been my perception of that brand. I like it fine, but it was just another brand to me. Just to be sure, Paul fired additional 12-round groups with the Blazer and the Battle Born Munitions, which grouped quite well given its less-than-stellar velocity consistency.

Paul refrains from drawing conclusions other than what the data show, which is fair because it was far from a sustained test under ideal conditions. I’ll do the same and close with the observation that the test pretty much does what it was intended to do: show that not all ammo is equal. You have to do your homework and, if you can afford it, your own tests.

Now hit the range. Like you needed an excuse. 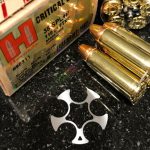 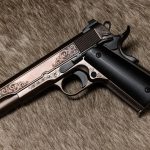