I love the Predator. Well, the first film at least, and I admit I enjoy the second film too. After that, well, it’s not great, at least film-wise. Predators was okay; The Predator (the latest one with Boyd Holbrook) was not so great. The Predators vs. Aliens movies kind of suck, but the comics are great. So, when they announced the Prey movie, I was cautious. I liked the idea and thought the prequel would be a refreshing take on the idea of the Predator. It’s also a bit of a follow-up from the second film (1990, Danny Glover as Lt. Mike Harrigan) in a few ways.

Anyway, as I type this, I’m about four beers deep and just finished the film, so let’s dive in.

The film goes back about 300 years to the early 1700s. We are dropped into a village of Comanches and introduced to a young lady named Naru. We instantly see she is quite skilled with a tomahawk and throws it like a pro. She lives in the shadow of her brother, Taabe, a skilled hunter. Naru wishes to be a hunter and wants to complete what seems to be some sort of rite of passage, something called kühtaamia.

Kühtaamia is explained to be a hunt in which she has to hunt an animal capable of hunting her in turn. This leads through the series of events where Naru tries to prove herself to her tribe, to herself, and even to the Predator.

As the movie takes place in early in the eighteenth century (1719), we get some gorgeous shots of North America. The woods, the rivers, and landscapes, all of it is breathtaking. The Prey movie was filmed in Alberta, Canada, particularly the Exshaw and Stoney Najoda First Nation regions. “Moose Mountain” and the Elbow River both feature prominently. With just a few cinematic exceptions, the movie is bright and shot clearly, so you can see almost everything without any issue.

If you haven’t seen Prey, then let’s end your part of this article now. I will tell you it’s worth the watch. It’s a solid, entertaining movie that can be a little slow in the first half. However, it’s only my second favorite Predator film. The first still owns a part of my heart.

Anything beyond this will be spoilers.

Into the Prey Movie

The film Prey starts a little slow. We are introduced to Naru, her brother Taabe, and her mom. We also begin to see her motivations. Her father has passed and she wants to be a hunter and warrior like her brother. She rejects her role as a gatherer and expert in medicine. As this unfolds, the film meanders a bit at the beginning with bits of the Predator shown and how he interacts with the dangers of North America.

The main problem here is that it’s not interesting. The idea invokes the first film. If you recall the first Predator, the movie in the first act is about an elite Black Ops team killing the enemies of democracy. The film follows a similar route with Naru trying to become a hunter. There is a subplot with a mountain lion instead of communists.

Even after Naru begins tracking the Predator, the film moves slowly. We do get to see the Predator deal with a rattlesnake, a wolf, and even a badass fight with a bear. About the time the Predator fights with a grizzly bear, the film starts moving.

When it starts moving, it gets ultra-violent. Lots of action, tons of blood, decapitations, and the disassembly of people limb from limb, and we see our hero grow and learn. Prey isn’t about super commandos with 24-inch arms fighting an alien. It’s about a young Comanche who has to outthink the Predator.

She has to be smart, and that’s how she survives. There are a lot of little setups that pay off in unexpected ways, and I appreciated it greatly.

A New Age for Prey

Setting the movie in the 1700s changes the dynamics and the weaponry all around. Obviously, Ole Painless wouldn’t make much sense in this film. This brings us to what appears to be fairly authentic weapons for the Comanche. This includes bows, spears, knives, and tomahawks made from stone. It might be one of the only movies to show a character sharpen their blade and constantly perform maintenance.

Additionally, I know very little about how the Comanches fought or used their weapons, so I dived into it. From my research, it seemed like the film did a good job of showing how the Comanche fought and used their weapons. This occurs down to how they retract the firing arm of their bow and how they retain their spears when blasting through arrows.

The hero in Prey, Naru, is exceptionally skilled with her weapons, even if it doesn’t mean a whole lot. One of the parts of the movie I thought was a bit cheesy is her parkour abilities. It’s just a bit too much to make her like some kind of fantasy ninja.

There are some guns thanks to some French trappers who become easy fodder for our beast of a Predator. I’m not ultra knowledgeable about weapons of this period, but a Frenchman describes the method of firing one, and it’s accurate.

We even see a very familiar 18th-century pistol that Predator fans will most certainly enjoy seeing. With that said, Prey couldn’t have a traditional Predator.

Our new, or well, old Predator is a bit different than what we are used to. It hardly seems fair for a Predator to use a laser weapon against people with muskets, early rifles, bows, and tomahawks. Luckily this Predator prefers to get hands-on. He likes a spear and his claw, and we even see a few new weapons. This includes a shield and arrow launching weapon guided by his familiar laser aiming device.

The new Predator still has the famous heat vision but wears what appears to be an older mask, maybe one made from bone. The Predator is also a bit different in design. We get the mandibles, but he looks different and lacks dreadlocks. He’s vicious, violent, and acts like a monster.

Predator is one of those creatures where less is more, and while we get some gratuitous shots, we also earn them. We get teases throughout the film, but for the majority of it, he wears the cloak and clicks away in the background.

The film is streaming on Hulu, and since I subscribe to Hulu, it’s tough for me to say it’s not worth the watch. I remained entertained throughout the film; even the slow parts are worth watching. Prey surprised me, and I was happy to be surprised. 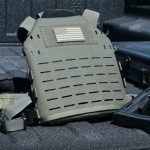 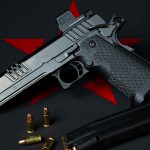