Four years ago and some change, authors Jason Anspach and Nick Cole released Galaxy’s Edge Book 1: Legionnaire. The Galaxy’s Edge series, done in what you might call an “episodic epic mini-series” format1 quickly took off. And for good reason. Written, as fans are quick to point out, “by veterans for veterans”, the books2 do present a level of verisimilitude that’ll be familiar to readers who’ve spent any time at all deployed.

Now, in November (fittingly enough), the series has released its 13th novel: Convergence. It’s the thirteenth book in the series and the midpoint of the saga where multiple plot lines come together (hence the title). I’m writing about this not just because this series is an impressive achievement (and a good read), but because they’re marking the occasion with a big month-long push to support the fight against the epidemic of veteran suicide.

Here’s how Anspach and Cole explain it:

2021 marks the third year we’ve partnered with Mission 22 to make a difference in the epidemic of veteran suicide.More amazing is that the Galaxy’s Edge community has donated tens of thousands of dollars to this worthy cause.

All month long, we will be donating 22% of the proceeds from items sold in the Galaxy’s Edge shop to Mission 22.

Some specially marked items will have 100% of the proceeds donated.

Galaxy’s Edge has grown a lot since the ambush on Kublar [a planet that provided the setting for Book 1: Legionnaire, ed]. You’ve been there every step of the way. Please consider following us in support of our veterans this month. Together, we will remind those who have served that they are not forgotten. 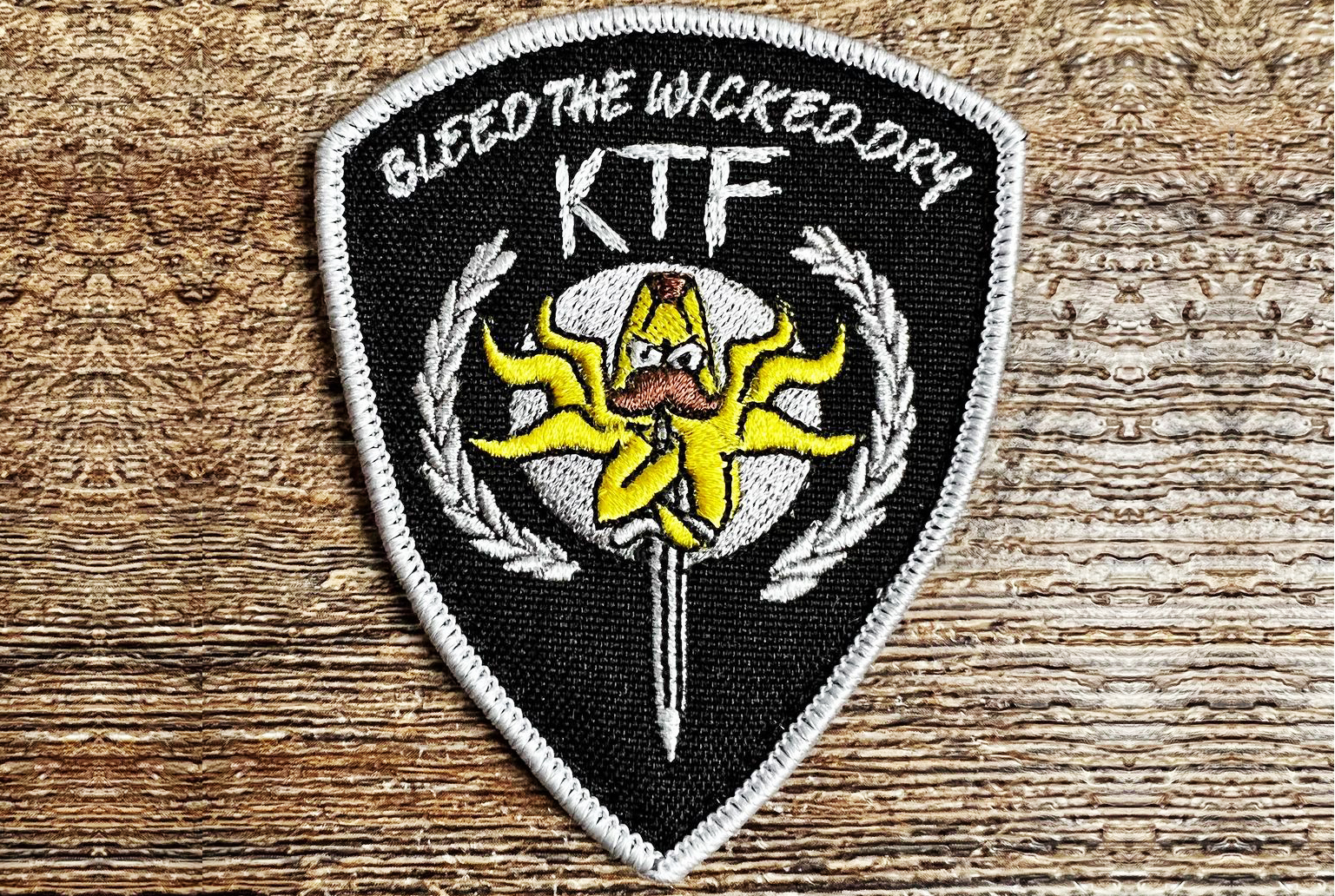 Galaxy’s Edge is online at galaxyedge.us, by the way. You can get books and loot online there. Not a fan of military sci-fi? No worries, hippie, you can visit Mission 22 directly at mission22.com.

So I’m gonna tell you about Book 1: Legionnaire. Here’s how it opens up.

The galaxy is a dumpster fire.

That’s not the way the Senate and House of Reason want you to hear it. They want me—or one of my brothers—to remove my helmet and stand in front of a holocam, all smiles. They want you to see me without my N-4 rifle (I’m never without my N-4) holding a unit of water while a bunch of raggedy kids from Morobii or Grevulo, you can pick whatever ass-backward planet garners the most sympathy this week, dance around me smiling right back. They want me to give a thumbs-up and say, “At the edge of the galaxy, the Republic is making a difference!”

But the galaxy is a dumpster fire.

A hot, stinking dumpster fire. And most days I don’t know if the legionnaires are putting out the flames, or fanning them into an inferno. 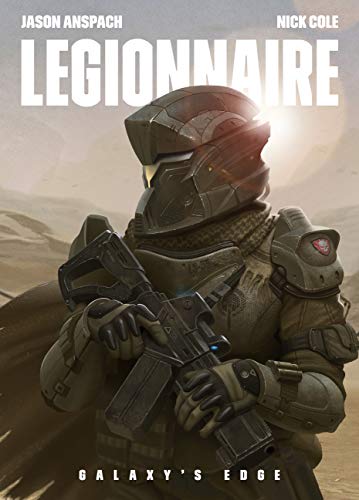 I’m also a big fan of how they describe boredom and isolated examples of the “tyranny of the moment”. If you’ve ever been bored out of your mind in some shitty place, and/or immersed in unpleasant weather and/or terrain, all while waiting on a fight…well, the way these guys write might just speak to you.

There’s more laughter, then the men settle into a quiet vigil. The dust storm swells into a rolling mass of tan, arid topsoil that boils up to the silver cloud sky. The noise is intense, my ears filled with the howling of the wind and the pounding of dirt and pebbles. I’m not sure that even with a bucket on I’d be able to hear anything other than the storm. From within the roiling wall that sweeps across the field, my eyes continually spot shapes that prove to be phantoms. Like a child seeing animals in the clouds, I keep thinking a koob truck or MCR tank is moving my way.

The wind changes directions and blows stiffly at our backs. The storm pushes away from us, the sudden crosswind halting its intensity. Most of the open field lying beyond our line is still hidden from us, but our visibility is improved. We can see reliably to one hundred meters, with the promise of more if the clean wind continues to push down from the cliffs and over our backs.

But where they really shine is, as you might expect from former action guys writing action sequences, is the action. And of course the tactics and gunhandling.

The scene outside is unreal. I’ve been in combat multiple times, but I’ve never seen anything like this. The air is thick with blaster fire and my bucket’s ventilators are working overtime to keep the smoke and hot smell of ozone from overpowering me. Bodies from the command sled are strewn all over the place, and the sleds behind it, blocked in the road, are getting pelted with small-arms fire while their twin guns blaze at koobs. The aliens are firing from behind stone and mortar huts, rock walls, berms, you name it. An old-model tank, the type that still fires explosive projectiles, is laboriously rotating its main gun toward the convoy.

To prepare an ambush and not be zeroed in already is a sign of amateurism. Not that I’m complaining. Obvious mistakes aside, the place is still danger hot, and it’s going to take some hard fighting to regain control of the situation.

I’m not worried, though. The Chiasm is still in orbit—I can see its massive bulk in the sky, pale like a moon in daylight—and a wing of tri-bombers will be down in short order. The guerrilla positions will be vaporized, and we’ll check Pappy’s sled for survivors, clear the wreckage, and continue on to Moona Village.

I don’t know why, but I keep watching the Chiasm. There’s thick blaster fire everywhere, and my focus should be on the koob threats surrounding us. But I just… stare at the destroyer. Almost transfixed. Call it a premonition.

I see a flash erupt in the center of the Chiasm. Moments later, I hear a sharp crack. I watch, frozen in place, at the turret, as the Chiasm splits in half and slowly sinks into the atmosphere, its sharp prow glowing red as it burns in reentry.

We’re all going to die.

You can find the Galaxy’s Edge series on Amazon here: [ https:// ] bit.ly/Galaxys-Edge.

Follow ’em on Instagram, @galaxysedgebooks. Some of what they post is about their various series. Occasionally you’ll see various authors and their friends shooting the kind of ammunition you’re likely more familiar with.

1 That’s what I call it anyway. You can call it whatever the hell you want.

2 This doesn’t just apply to the initial series. Galaxy’s Edge has spawned a number of offshoots, supporting stories and timelines, prequels (e.g. Savage Wars), midquels (which I’ve included because I no shit just learned this term yesterday), and stand-alone novels. 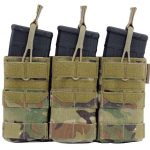 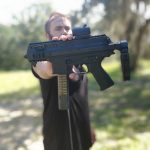