I love lever action rifles. I just do. I’ve carried the same Marlin lever gun every deer season since 1978. It’s never given me a reason to switch to anything else. So, when I saw that Chris and Jake from 1911 Syndicate had a video called “Lever Actions — Why You Need One,” well, I couldn’t resist. The video linked below is partly an ode to the coolness and reliability of lever guns and partly a review of the Marlin Model 1894 CSBL chambered in .357 Magnum.

They start with a rundown of the Marlin’s specs, so I’ll do the same:

Note: The Leupold scope doesn’t look like that out of the box. It was Cerakoted to look like the one Chris Pratt had on his lever gun in one of the Jurassic Park movies. I don’t know which one. They all run together for me.

Speaking of Chris Pratt in Jurassic Park, it was that movie, and another called Wind River, that sparked Chris and Jake’s interest in lever guns. I totally get it. Mel Gibson in Lethal Weapon is the primary reason I own a Beretta 92. You want what you want. And after hearing about Wind River, I want to see it now.

Anyway, Chris gives us a quick look at the origins of lever guns, starting with the 1860 Henry Rifle chambered in a .44 caliber rimfire, and transitioning to Marlins. He says of Marlin and Henry, “Those are the two big names. They’ve been around the longest.” I’m thinking he should have included Winchester there, but hey, it’s his video.

Marlin was founded in 1870 by John Marlin, who previously worked at Colt during the Civil War. He started out making .22, .32, and .38 caliber derringers. He made his first rifle in 1875, based on the 1861 design of Charles Ballard. Appropriately, he called it the “Ballard Rifle.” It was apparently a good firearm and quite popular with shooters of the day.

Pop culture references aside, Chris and Jake also wanted to get into lever guns because of their reliability in cold weather. Lever guns have historically been popular in cold environments and have held up well. Chris says he found out that guns with side ejection ports, like the Marlins, are a little better in the cold than guns with a top ejection port. The latter are apparently more susceptible to freezing. I never thought about that, but perhaps that’s because the top ports tend to be more exposed to rain and ice? Maybe.

Chris and Jake chose the 1894 CSBL because they wanted a gun that shared a cartridge with Jake’s newly purchased Korth .357 Magnum revolver on backcountry outings. They also considered a .45-70, never a bad choice, but the fact that a friend was willing to lend them this particular Marlin sealed the deal. I totally get that, too. One place they went just a bit wrong was they wanted that shared cartridge to be able to “put down a big animal if need be.” Chris says he feels like if he drills nine rounds of .357 Magnum into an animal, “if he gets me, he earned it.”

Well, maybe so, except they then talked to a Yellowstone Park Ranger who advised Jake to use the .357 on himself if encountered an angry grizzly. I was kind of thinking the same thing since my choice to protect myself from a grizzly would be .44 Magnum or .454 in the revolver and a hot .45-70 load in the lever gun. But that’s me. You do you.

But they understand that situation and the .357 will do fine against most anything else that wants to be unfriendly. Against aggressive mountain lions or black bears, they say, it’s “Probably gonna be awesome. Against a megalodon in the sea, which is like a [grizzly] bear on the ground, not gonna go so hot.”

But they love how the dude in Wind River apparently shoots a 500-grain 45-70 load that sounds pretty awesome. Chris says he confirmed that from some old-timers on the forums. Plus, he adds that “if Chris Pratt decides a .45-70 is what he’s gonna use to put down a T-Rex, well dammit, I want one also.” Personally, I’m in full agreement on that.

Chris makes a good point about why lever guns are so fun. When you played cowboys and Indians as a kid, what gun did both sides likely have? A lever gun of some kind. What was your first BB gun? For most of us, it was a Daisy lever action, probably a Red Ryder. We’ve had them all our lives and they are just fun guns all the way around. In fact, this whole thing reminds me of my colleague David Reeder’s article on Tactical Lever Guns. You should check it out.

Finally, we get to reliability. Chris and Jake say they’ve heard some things about the technology being old and complicated, and that can be true. But some time on the forums has convinced them that if gunsmiths in the 1890s can make them reliably, modern materials and techniques can do the same. You can learn a lot on the right forum.

I think part of the reputation for unreliability comes from the unfortunate period when Marlin was owned by Remington. Those guns were just garbage for the last few years of that arrangement. But I have high hopes for the Marlin brand now that Ruger is running the show. I think Marlin will be back to its old self.

Chris concludes by saying he thinks the lever gun is “a great option for cold weather, jungle, you know, on the island running from velociraptors and everything.” At which point Jake works the action, producing that lovely sound. If you don’t know that sound, man, you need to go get yourself a lever action. ‘Nuff said. 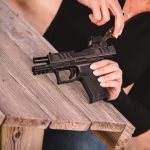 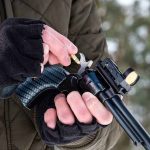