Maxim Defense, a manufacturer of state-of-the-art precision firearms, firearm parts, and accessories, has upgraded the MSX suppressor line to include the PRS suppressor rated for 6.5 or .308 Win. Designed to minimize the increase in cyclic rate and gas blowback of a suppressed firearm, the PRS is a great addition to the Maxim family. According to Maxim Defense, the PRS is designed to be the lightest suppressor for shooting or hunting, and the company believes it achieved the previously impossible strength-to-weight ratio.

Primarily, the PRS suppressor is designed to significantly reduce the sound signature, decrease the flash signature, reduce recoil, and increase shoot accuracy. While the suppressor has a simple 3-piece MonoKore design, it is fully serviceable by the end user and disassembles with common tools.

“The DNA of the PRS comes directly from our hugely successful M240 suppressor,” said Dave Larson, Executive Vice President of Sales and Marketing at Maxim Defense. “We utilized the same technology and engineering of the M240 to manufacture this serviceable, lightweight, incredibly-quiet suppressor. The PRS is the perfect companion for your next hunt.”

The PRS suppressor is constructed from Grade-5 titanium and 7075-T6 aluminum which keeps the suppressor from being too heavy, with it weighing only 10.8 ounces. The suppressor only adds 7.25” to the overall length of the host rifle, meaning the suppressor isn’t a deadweight at the end of the barrel.

According to Maxim Defense, the suppressor drops sound to below hearing-safe levels, with an average measurement of 131.9dB on a 6.5 Creedmoor 18” bolt action rifle at MILSTD-1474D standards. The suppressor comes threaded 5/8-24, common threading for 6.5 Creedmoor and .308 Win calibers that it’s rated for.

The PRS suppressor has a Type-III hard coat anodizing, but the company states it has a limited rate of fire of 20 rounds at one round per second, and then it needs to be allowed to cool to ambient temperature. Part of the MonoKore design is the core has integrated carbon cutters for tube cleaning. 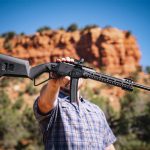 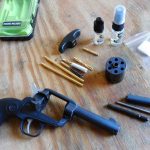