Maxim Defense is manufacturing suppressors. Beginning with one for a belt-fed, then the DSX-D (Duty Suppressor System – Direct Thread) suppressor, plus the DRF-22 (Direct Thread Rimfire) suppressor, with more to come. And none other than industry legend Phil Dater is helping them do it.

After S&W acquired Gemtech Suppressors and moved the company cross country, Maxim Defense was privileged to hire many of the talented people who remained behind. One of those people was Phil Dater. You might remember his name from the founding of Gemtech and the excellent work done by Antares Technologies in the modern small arms and suppressor industry.

Michael Windfield, founder and owner of Maxim Defense, launched the development of Maxim’s suppressors with the directive, “We do the hard stuff first.” Hard stuff in this context refers to successfully suppressing an FN MAG belt-fed machine gun, which they did.

Having checked that box, they began developing a full line of suppressors. Those devices are now dropping sound levels well below the OSHA hearing safe threshold of 140dB. For example, the average measurements taken per MILSTD-1474D while testing the DSX-D suppressor were 134dB on a 10.3″ AR-15 chambered in 5.56 and 114dB with the DRF-22 rimfire suppressor. These sound levels were measured at the shooter’s ear.

The suppressor consists of a three-piece MonoKore design that adds 7.25″ to the muzzle of the rifle. The DSX-D is rated for full auto in all available calibers; 5.56mm, 7.62mm, and 6.5 Creedmoor.

There is, however, an 8.5″ barrel restriction. Additionally, the suppressor can be pinned to a 10.3″ barrel to give you a 16″ overall barrel length essentially.

The Duty Suppressor System is built for the world’s most rigorous demands; this suppressor is designed to be the most robust and strongest suppressor in its category.

It has been repeatedly tested with SOCOM tables across various calibers and barrel lengths, down to 8.5″ 5.56 NATO with M855 ball ammunition. It has survived with no damage or significant change in sound reduction.

The DRF-22 (Direct Thread Rimfire) Suppressor is specifically designed to minimize the increase in cyclic rate and gas blowback of a suppressed rimfire firearm. Design features include the significant reduction of sound signature, decreasing flash signature, reduction of recoil, and an increase in overall accuracy. 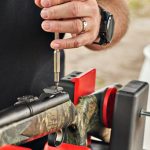 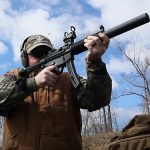