Magpul recently announced their latest, and one of the most surprising, new products in a while. They teamed up with Maztech Industries for what is sure to be a game-changer for the Army.

For a long while, the Army has not been shy about their need for a Round Counter capability to inform both the shooter and give others an idea of how many rounds they have in their weapon. Not only that, but they also wanted data on how many rounds the weapon has fired for maintenance purposes.

The new X4-FCS series does just that. The pairing of Magpul and Maztech Industries developed the X4-FCS, just one in a series of items in their joint X4 line, and is an applique for your existing LPVO, thus creating it into a smart optic.

The X4-FCS (FCS is short for Fire Control System) pairs with an existing LPVO, or for those that don’t know Low Power Variable Optic, for a visual display with loads more information for the shooter. With multiple data inputs shared with onboard input systems, the shooter will see range, ballistic data, round counts. rounds remaining, and other useful information for better situational awareness.

One such input for the S4-FCS is the round counter on the rifle. The round counter is integrated into the PMag and the rifle grip. It brings accurate rounds remaining counts to on rifle and off-rifle displays, both in powered and unpowered options. It will help give instant and accurate round count information that is wireless and securely accessible through technology links.

The systems are said to be in development now and the price tag for the components are expected to be reasonable compared to what would be expected with advanced technology components. 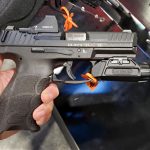 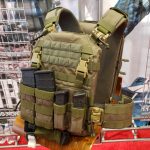