Military Armament Corporation, a relatively young firearms company with the same name as an old market standby, has expanded its line of offerings to include a throwback with the JSOC 1911 pistol. The company states that it’s a classic design from the battlefield lessons of the 1970s and 80s.

CEO, Tim Mulverhill, explained, “The new Military Armament Corporation draws it’s roots from the era of a resurgent American resolve, when we once stood between the massed divisions of the Soviets and our allies in Western Europe, hunted drug cartel kingpins in South America, and being called a communist was the greatest insult imaginable”.

The slide features an LPA fully adjustable rear sight inlet that allows for a lower profile and easier concealed carry with a brass bead front sight. The full-sized grip features 25 LPI checkering on the front strap and the one-piece competition-style mainspring housing.

Featuring the MAC logo on dark walnut checkered grips, the gun has a beavertail grip safety and ambidextrous thumb safeties. An extended magazine release rounds out the features of this gun. It ships with a cleaning kit, cleaning cloth, hard locking case, and two 8-round magazines.

According to MAC, the company incorporated modifications that used to be performed by 1911 custom shops or by the military armorers at the time into the JSOS design. The JSOC 1911 has a Tennifer QPQ finish on the frame and the slide. No word on pricing yet, but that information, as well as the pistol, will be available at SHOT Show 2023. 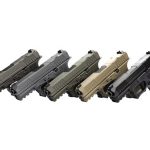 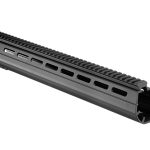