One of my friends recently posted a picture of his gear to Instagram. In it was a reference to the MultiTasker Nano. He was doing an annual shakedown, as he described it, “before the shooting starts”. That’s an important thing to do for anyone, particularly if someone is going to be shooting back, but in this case, as I learned, he was doing so in anticipation of upcoming competition matches. Specifically, a “quantified performance match”.

“Time for a gear shakedown before the shooting starts!”, Joe said. “It’s nice having the new Nano in my range bag for work like this. It’s a nice complement to the MultiTasker and Twister and has more uses than you might think.” 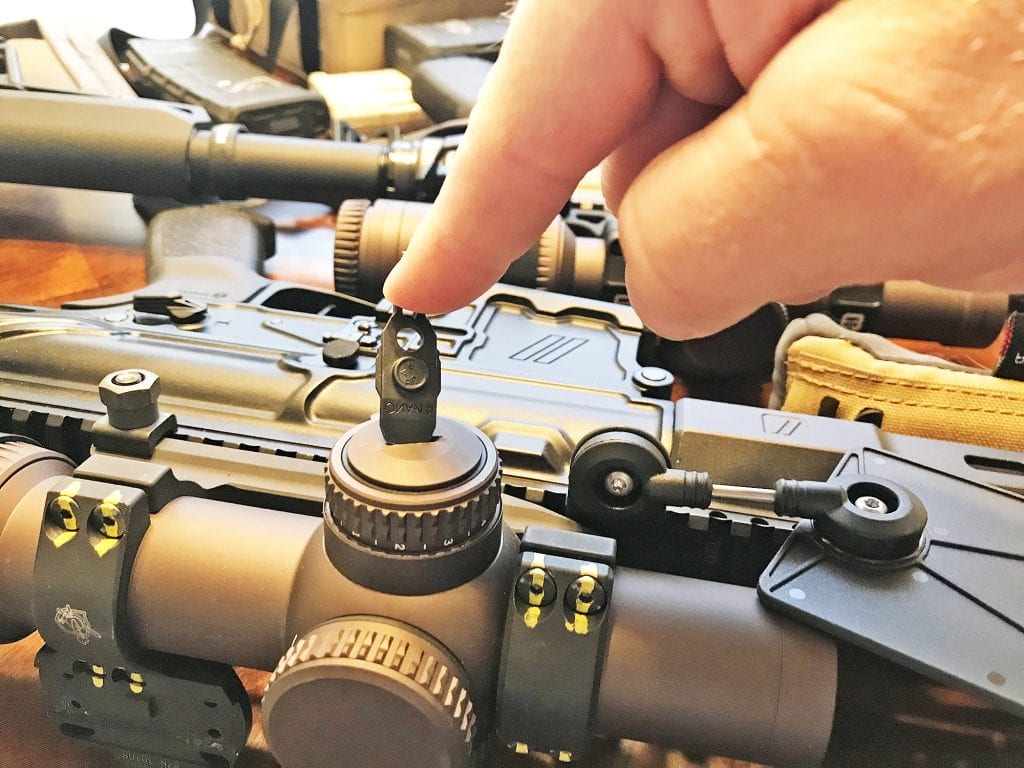 Adjusting a scope turret with MultiTasker’s Nano. (That’s a Vortex LPVO in a Knights Armament mount.)

Now, although I know it was released, I haven’t used the Nano yet. Other than generalities, and despite the fact that we have it on the “Warehouse side”, I didn’t know much about it. Nor was I was then familiar with the term “quantified performance match” (though I do follow news from the Precision Rifle Series, or PRS).

So I hollered at him.

Q: Okay Joe, for those who aren’t familiar, what’s the Nano?

A: It’s a new tool from…MultiTasker. The nobs on the top are to adjust an Aimpoint and similar optics. It’s made to put into the bottom of the [forthcoming, ed.] MagPod Gen 3. There’s a side blade to it you can use to remove battery caps and some other features too.

A: It’s convenient, light, and doesn’t take up a lot of space. There’s a lot you can do with it, especially considering the size and weight. It could be easy to lose though, in a range bag or on the ground, so I’d put it on a keychain, stash it in a dedicated place in my gear, or of course on the bottom of your PMAG.

More about the Nano 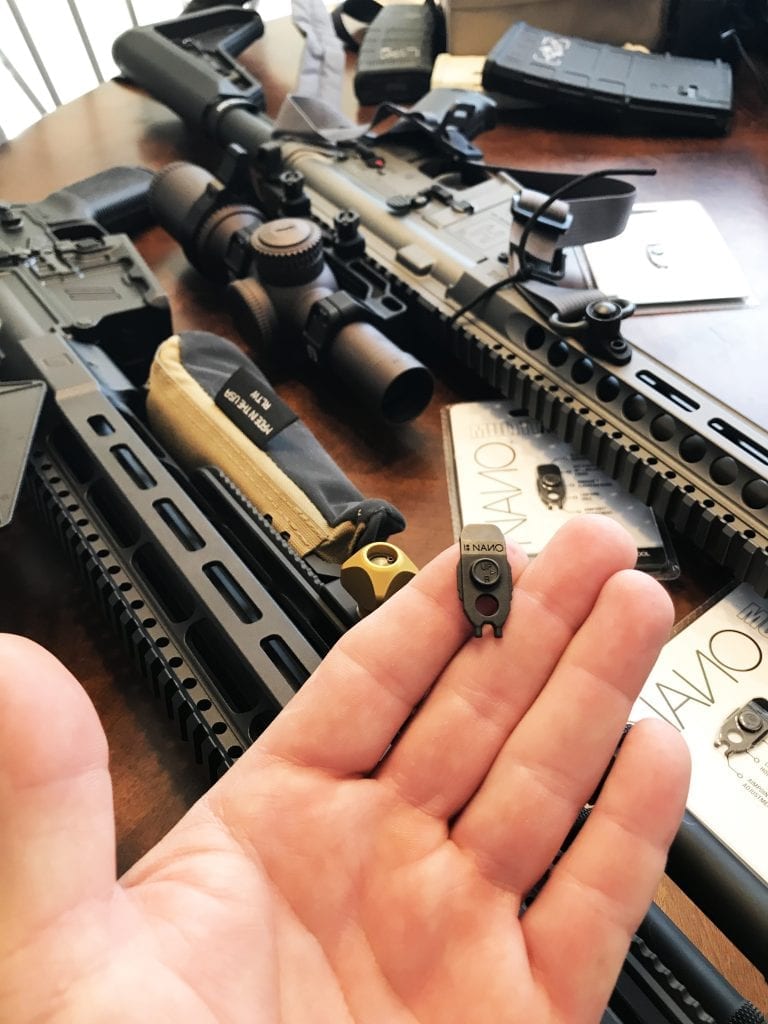 The MultiTasker Nano is a handy and lightweight tool: but take steps to ensure it doesn’t get away from ya!

A: It’s a precision match for semi-auto rifles. Ash Hess and Jack Lueba started the league.

Q: What’s the deal with the bright slashes on your scope mount?

A: The yellow is painted on there for witness marks. I use them to make sure the screws haven’t come loose and that they’re torqued down to spec, you know, to be sure nothing has moved. 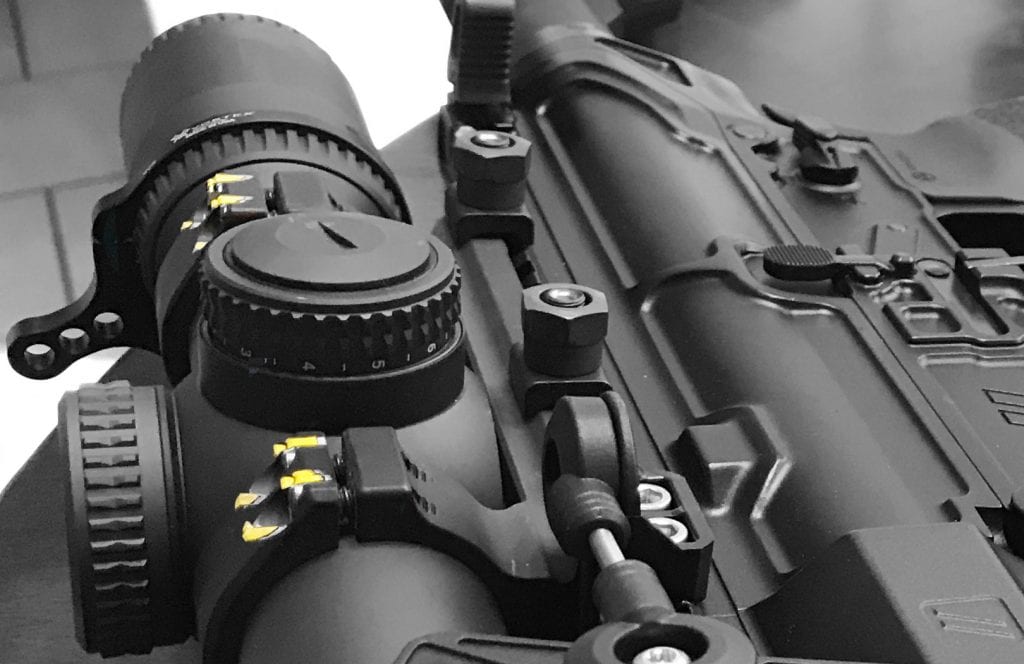 The “witness marks” on Neuroth’s Razor 1-10 Low Power Variable Optic. They allow him to ensure with a glance that the scope is in place where it’s supposed to be and that the screws haven’t started to come loose.

Q: What are the optics?

A: Both are LPVOs [Low Power Variable Optic, ed.] The black gun is a precision competition gun. That scope is the Vortex Razor 1-10. The brown rifle has a Vortex Optics Razor 1-6. 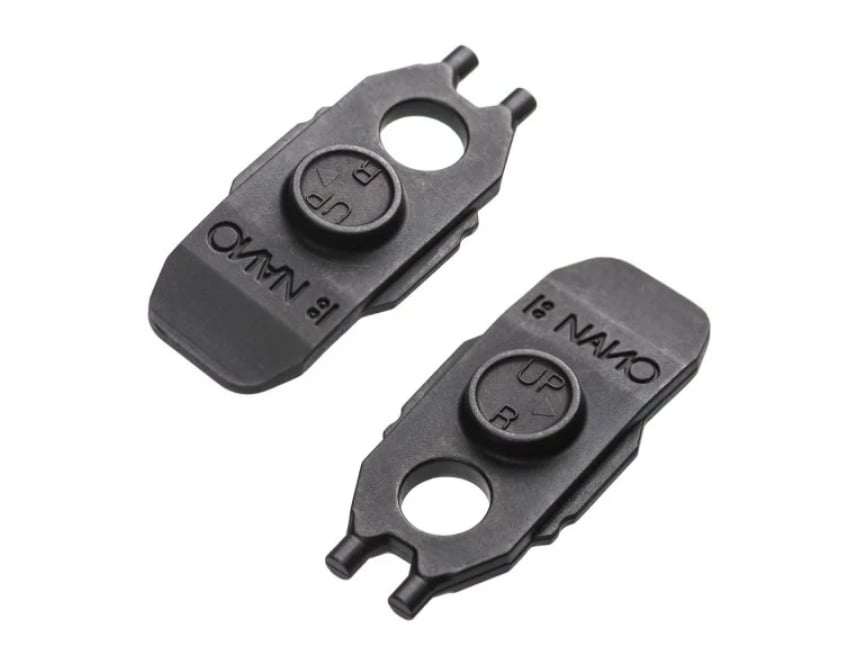 A: The black gun is an AR10 (-ish) chambered in 6.5 Creedmoor with Zev Tech receivers and rail. The optic is a Razor 1-10 in a Knights Armament Mount, and the bag on the front is the Armageddon Gear/Area 419 “Grip Changer” on an Arca Rail from Area 419. The Arca Rail allows you to rapidly move the bipod up and down the rail. Same with the bag. You can have both mounted at the same time. The placard looking thing is a dope card holder. I picked it up off of Amazon. You can put your notes down on a 3×5 card and throw it on there so it’s easy to see from the prone position.

The brown gun is a 5.56mm Hodge Defense AR 15 with a Razor 1-6 up top in a Badger Ordnance mount. That’s a Centrifuge Training QD sling on there. Both rifles are equipped with Magpul stocks.

More about the MultiTasker Nano

Announced in early February 2021, the Nano is a small (hence the name) stainless steel tool intended for carbine optic adjustment.

It features a dedicated Aimpoint T1/T2 turret adjuster on one end and a slotted screwdriver with radiused edges on the other. The former will work on more than just Aimpoints, that the latter has multiple uses. 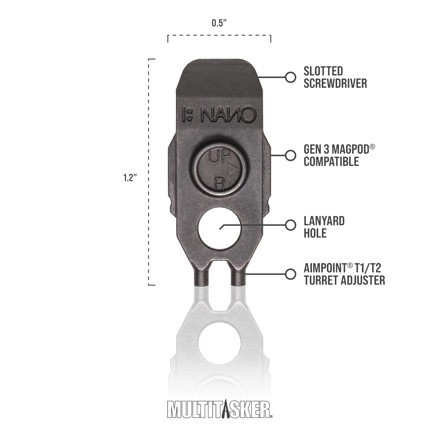 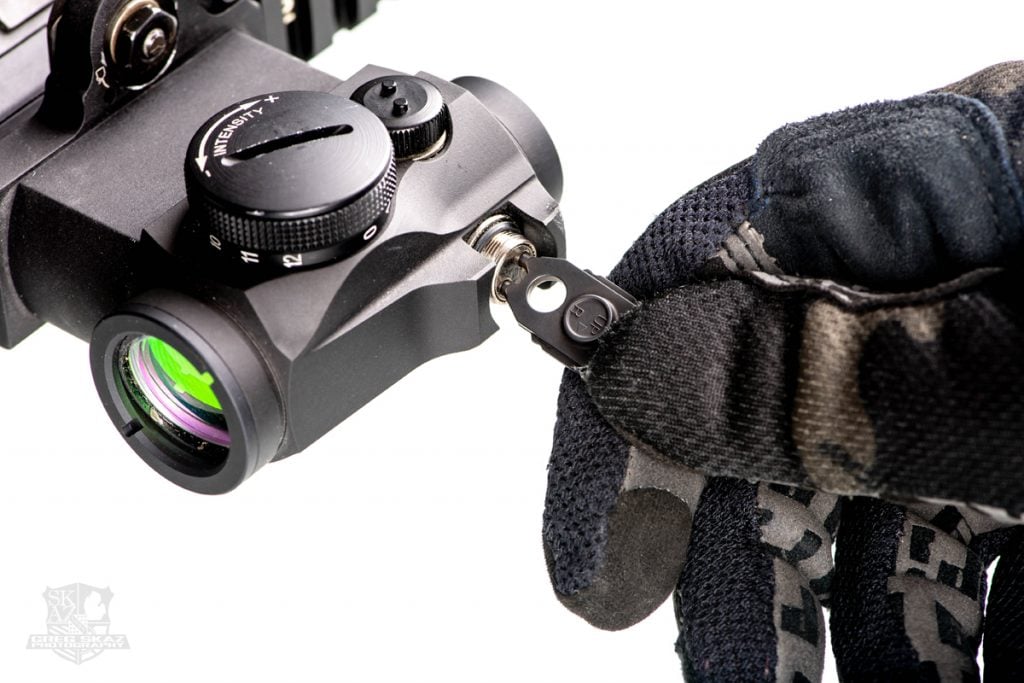 According to MultiTasker, the Nano is…

“…compatible with a wide array of issued carbine optics, including the Aimpoint M68 CCO, Trijicon ACOG, Eotech EXPS-3 as well as the Trijicon RMR and aiming lasers such as the PEQ-15 and MAWL from B.E. Meyers & Co.” 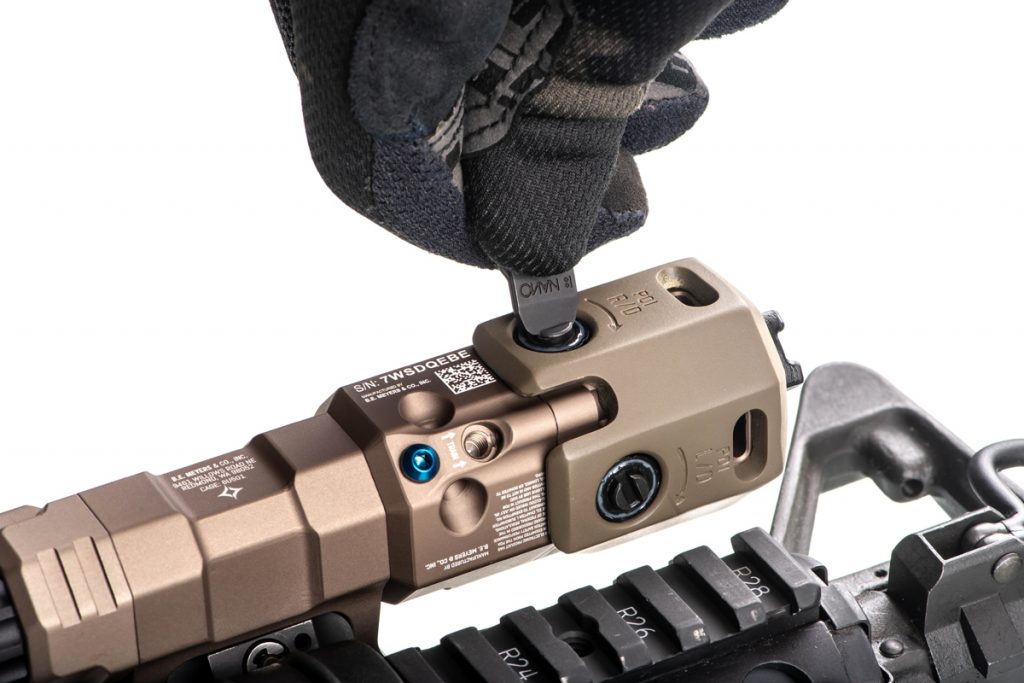 Designed to tuck into the storage slot of the soon-to-be-released Gen 3 MagPdd, the Nano can easily be carried on a lanyard, keychain, or something similar. 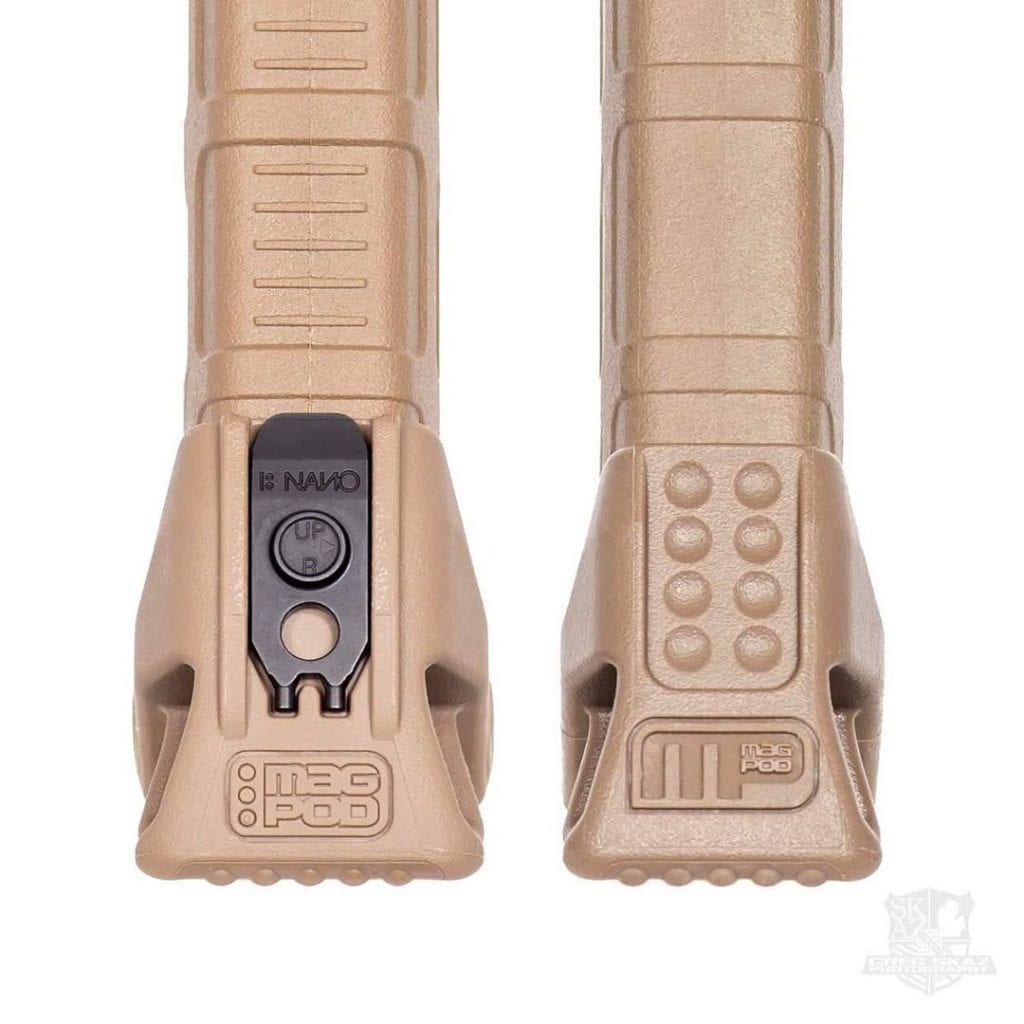 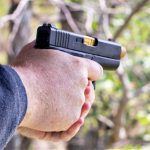 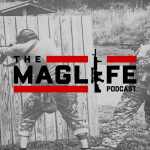