Springfield Armory announced the newest pistol to their XD-M Elite OSP line, the XD-M Elite 3.8” Compact OSP .45 ACP. Springfield says that it combines the big-bore power with the cutting-edge performance for a great concealed carry option.

This compact pistol is reported to pack a punch and is geared towards the concealed carry crowd. The Springfield XDM Elite 3.8” Compact OSP has a 3.8” cold hammer forged steel barrel that is Melonite coated which when reviewed by Paul Carlson at The Armory Life, is more accurate than he could shoot. The grip boasts fully ambidextrous controls, including an all the time ambi magazine release.

The Springfield XD-M Elite 3.8” Compact OSP also has a match-enhanced META trigger that is reported to add to the accuracy of the system. With the pistol being a compact model, it has a shorter grip. However, it has a removable short flared magwell and comes standard with two 10 round magazines from the factory.

Springfield’s OSP line (which stands for Optical Sight Pistol) all come optic ready from the factory. The XD-M Elite 3.8” Compact OSP can accept any red dot optic with the interchangeable optic mounting plates. Additionally, the slide has both forward and rear cocking serrations for ease of use. The sights that are on the XD-M Elite are U-notched sights with a fiber optic front sight.

“The XD-M Elite family has proven itself through its combination of rugged reliability and top-tier performance,” says Steve Kramer, Vice President of Marketing for Springfield Armory. “And now with the XD-M Elite 3.8″ Compact OSP in .45, shooters have a powerful CCW pistol that is ready for every day carry duty.”

The Springfield Armory XD-M Elite comes in two different formats. The standard pistol as well as an optic package. The HEX Dragonfly red dot is a 3.5 MOA optic is a part of the factory package also released. 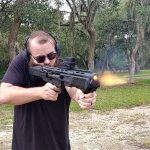