If you’ve spent time running revolvers, you’re familiar with the reload process. In the movies, you usually watch the hero or some hapless soldier struggling to reload their gun one chamber at a time (and they probably drop ammo along the way). There’s no need to reload a revolver one round at a time, though. Products like the Original Precision Moon Clip make reloading a great deal faster and smoother.

Original Precision provides details of the moon clip and its design:

The moon clip has traditionally been a competition revolver item, with the exception of its modern roots which stem from the U.S. Military Revolver models M1917, one made by Smith & Wesson the other made by Colt, both were chambered in 45 auto and issued with half moon clips for use on the battle field.

With the current growing trend in concealed carry, particularly the small pocket sized revolvers. It became apparent to J.D. at Original Precision that his methodology for the use of a moon clip in your carry cylinder as a means of guaranteed positive ejection for faster reloads under stress would be beneficial to everyone that carries these pocket sized revolvers for self defense.

Thus the Original Precision CCW HDTM Moon Clips and CCW HDTM CNC machined cylinder conversions were created. This one of a kind conversion is engineered with concealed carry ejection being top priority. It began as a personal project for J.D. to machine the cylinder of his own snub nose carry gun, a Smith & Wesson J Frame, model 438, 38 Special, and create a heavy duty heat treated stainless steel moon clip of his own engineering and geometries on the wire EDM.

This moon clip is designed for revolvers chambered in 38 Special/357 Magnum. Original Precision created it to solve ejection problems such as the common issue of brass getting stuck in revolvers with short ejection rods (think snubbies). After all, there’s not going to be a fast reload if you’re standing there picking spent brass out of the cylinder. It’s also made to prevent the edge of a case from getting stuck under the ejection star. The manufacturer states use of the moon clip doesn’t alter headspace and that the clip is compatible with all brands of ammunition. In addition, they guarantee a 100 percent ejection rate. This is a Smith & Wesson J-Frame compatible moon clip.

Regarding the versatility of the product, the manufacturer states:

Along with just how tough and durable these moon clips are, the CCW HDTM Moon Clips maintain positive case retention after repeated uses regardless what size or brand cases are used. They also load and unload with your fingers and take most any 38/357 ammo you can find. Hornady, Speer, Buffalo Bore, Federal, Remington, Winchester, Fiochi, Starline, CBC Magtech, PPU, WRA, RPFC, Western, PMC, WW, WCC, to name a few.

MSRP for the Original Precision Moon Clips is set at $27.00 for a package of three. 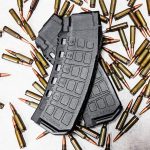 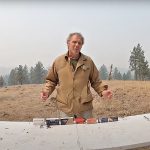