It’s always easy to talk about the specifications of a pistol, but how does it perform especially against a pistol that has been around for a while. And how much do you know about the relatively new Ruger 57 pistol? Paul Harrell decided to take on both the Ruger 57 and put it head-to-head against the older FN57. How do you think it did?

The Ruger 57 in 5.7×28 made its debut in 2019. For this review, Paul wanted to directly compare the Ruger to the FN Five-seveN, which has been around for a few decades. Each pistol was shot with the same ammunition and at the same set of targets as the Ruger.

For the first test, he wanted to shoot each pistol at the same distance with targets that were side by side. For the Ruger, the shots were a good group, if a bit low. The FN, on the other hand, was high and out of the center circle. The main reasoning, according to Paul, is that the Ruger has adjustable high visibility and fiber optic front sights, but his FN has non-adjustable sights.

He further elaborated on the sights saying that his FN originally had adjustable sights when he received it. But after many trial and error rounds, the sights would never hold zero once it was repacked. His solution was to swap out the sights to non-adjustable sights, which obviously cannot be adjusted on the range. The Ruger sights, on the other hand, didn’t seem to lose zero even when hit with his hand repeatedly.

In talking about the Ruger sights being highly visible, he said that this would be helpful for getting on the target faster. He set up two targets side by side and shot both pistols from 7 yards switching between the left and right targets. He said that given the shots, the Ruger was only slightly better, questioning is it “enough of a difference to make a difference?” Ultimately it comes down to what you think about that test.

Paul then went on to talk about the disassembly of both pistols. The FN needs to have the internal hammer forward, and to get it forward you need to have a mag to trigger the magazine safety. Once the hammer is forward, the small button disengages the slide, and it comes apart. The Ruger, conversely, doesn’t need a magazine for disassembly as it has a retention pin to remove the slide. It only has a few extra steps and it’s pretty negligible as both are pretty easy to take apart.

He also talked about the relative triggers for the pistols. Both have a single-action autoloader system, a considerable amount of creep, and what he refers to as slop before a round will fire. He actually calls out a lot of different synonyms for crappy before settling on abysmal. But at least both pistols are the same in that regard.

Later, Paul tested both pistols in a chronograph and found that both median readings were within a few numbers of each other. So, he turned his attention to what he called his meat test.

He used pork ribs, chips, grapefruits, another set of ribs, t-shirt material, and fleece backing to see how the round behaves. He found that while he had good penetration of the round, the overall performance was not as impressive as rounds such as 45ACP.

In the end, Paul says the discussion comes down to two important points:

With the FN57 coming in with a price tag over $1,000, the Ruger is considerably cheaper. In regard to reliability, Paul did say that he only had around 200 rounds through it but has yet to have a single malfunction, something that the FN never achieved. Which for a new pistol, is pretty impressive.

Like many commenters said, the video was extremely well done and informative, even with the distraction of watching him pull pistols and magazines out of his pockets like some gunpowder fueled Mary Poppins. 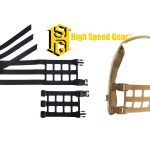 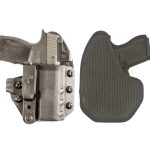