If you’re interested in AR-style rifles, you’ve probably heard of Radian Weapons (and if you hadn’t, you have now). Radian is known for producing good-quality firearms with fantastic attention to detail and their Radian Model 1 proves they’re delivering as promised. In this video review, Ivan of Kit Badger runs through a hands-on review of this rifle.

What are the Features of the Radian Model 1?

The rifle Ivan reviews in this video is the Model 1 with a 17.5-inch barrel. Radian markets it as their intermediate-length rifle but it would also be accurate to refer to it as carbine-length since it’s under 18-inches. The rifle is chambered in the popular 5.56 NATO round and has an eye-catching flat dark earth finish. Ivan describes some of his favorite features at some length:

“There is a QD endplate with a stainless steel insert, so it [won’t get] chewed up or come out like some of the aluminum ones. …of course, the castle nut is properly staked, which is a good thing. [It has] super clean billet lines going forward and…you get into their proprietary handguard. The barrel nut is incredibly strong; [it is a] really strong, rigid handguard, which is good…especially if you end up mounting stuff like lasers to it.”

Check out the video below to find out what else Ivan liked about the Radian Model 1 and how it performed on the range:

Overall, the Radian Model 1 17.5-inch in 5.56 NATO looks like a well-made, reliable rifle that’s capable of fantastic accuracy. It’s always nice to see such precise machining and attention to detail on a gun, and who doesn’t love sub-MOA?

Do you have a Radian Weapons rifle? Do you want one? Tell us about it in the comments below. 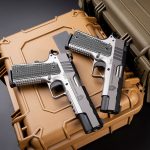 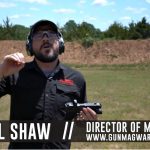