In the world of firearms, it seems like gun owners fall into one of two categories when it comes to the 1911 platform: love or hate. It’s true there’s some neutrality out there but in general, it does appear as though those who love guns either become addicted to the 1911 or see it as an outdated and rather pointless gun. Here’s the thing: the 1911 is a useful platform with multiple safeties that’s now available in a variety of calibers. Learning to run one — well — is a worthy undertaking. And when it comes to suggestions for a modern 1911 to try your trigger finger at, we do have a suggestion: the Devil Dog Arms (DDA) 10mm 1911. Read on to find out why.

Something you might not know about 1911 history is that we can trace its roots back to the Spanish-American War (that means back into the late 1800s). The United States did win the war and when all was said and done they decided to claim the Philippines. No sooner had they done so than the Filipino leader Emilio Aguinaldo decided to declare independence, triggering another war, the Philippine-American War.

Here we can fast-forward to the Moros, Muslim southern Filipinos who felt the incursion by the United States was an immediate threat to their 600-year battle for religious autonomy. This is where we got the Moro Rebellion, part of the Philippine-American War.

During the Moro Rebellion in the early 1900s, the US Army discovered their 38 Long Colt revolvers were all but useless which lead to the creation of the 1911. (Photo: historical archives)

The Moros had a fundamentalist faction known as the juramentado (translation “one who takes an oath”). That faction was zealous and honor-bound to murder Christians, meaning the Americans had to go. But they weren’t just zealous, they were incredibly tough fighters—fighters amped up on opiates so they’d be even more fearless and numb to pain.

During their attempts to squash the Moro Rebellion the US Army found out the Colt New Army 1892 chambered in .38 Long Colt they were using wasn’t up to the task. Some cartridge details: the .38 Long Colt was a black powder cartridge dating back to 1875. Its case length was 1.031 inches and bullet diameter was 0.361 inches. The best way to describe it would be as an anemic cartridge. The muzzle velocity of a 150-grain round was 777 feet-per-second and the muzzle energy was 201 foot-pounds. Sounds like they needed something better, right?

This all caught the attention of Colonel Louis Anatole LaGarde, the man you may know for his part in the Thompson-LaGarde Report. Yes, the report that decided .45 ACP was the best-suited handgun cartridge at that time. That led to the 1907 US Army Pistol Trials which included a long list of handgun features the US Army required for their new pistol. The rest is basically 1911 history.

Decades would pass before the 10mm would be created and even more time passed before it became a cartridge seen as compatible with the 1911. This brings us to the current day with Devil Dog Arms launching their 10mm-chambered 1911 complete with a threaded barrel. A lot of history and knowledge backs the DDA 10mm 1911 and the end result is, in this writer’s opinion, fantastic.

The DDA 10mm 1911 is a solidly-built Government-sized pistol chambered in 10mm with a capacity of 8 +1. It weighs in at 36.8 ounces, empty, and has a heat-treated 4140 steel frame and 4140 bar stock stainless steel slide. Having some weight on a 10mm is always a good idea and Devil Dog Arms accomplished it in such a way that it has elegant-yet-durable lines with good balance rather than a heavy, unbalanced design.

Oversized, angled serrations at the front and rear of the pistol allow the shooter to manipulate the slide from either end. Side note: if you do choose to rack the slide from the front, take care to do so properly, avoiding covering any portion of the muzzle with your hand. The slide itself has a custom flat-top design with a black oxide finish to reduce glare and cut the risk of snags on the drawstroke.

Perhaps one of the greatest features of the DDA 10mm 1911 is its barrel. The barrel is 5.0-inches in length and made from domestic 416 stainless steel. It’s designed to last thanks to being heat-treated, double-stress relieved, and button-rifled. The twist rate is 1:16 LH for superior accuracy. This review model also has a threaded barrel, an excellent addition since it means you can add a suppressor with no need for aftermarket parts.

The gun’s 4140 stainless steel frame has a rounded trigger guard and an accessory rail ahead of the guard. Adding a light or laser – or both – to that rail is a good idea whether you’re using your DDA pistol for self-defense or hunting. Aggressively textured NBD grips made by the manufacturer give the shooter a firm grip even with sweaty hands.

DDA NBD grip panels are aggressively textured for a sure grip even with wet hands. (Photo: Kat Ainsworth Stevens)

Factory sights on the DDA 10mm 1911 are a fixed red fiber optic front sight and adjustable blacked-out rear sight. Other features include 22 LPI front strap checkering and a generously sized beavertail grip safety. The gun ships with two 8-round magazines and a hardshell case.

This is a pistol that fit my hands beautifully right out of the box. At the time I reviewed it, I had a stack of other review pistols and this gun quickly became a favorite. The ammunition I used for this review and for some handgun hunting included Federal Premium Personal Defense Punch 10mm 200-grain JHP, Federal Premium Personal Defense 10mm 180-grain Hydra-Shok, Inceptor Preferred Defense 10mm 90 grain ARX, and Hornady 10mm 180-grain XTP.

Testing took place both from the bench and firing offhand. Shooting from the bench at a distance of 25 yards the average five-shot group size was 2.7 inches; shooting offhand at 10 yards the average five-shot group size was 1.3 inches. The best group shooting from that distance offhand was nailed by Inceptor’s lightweight frangibles with a group size of 0.99 inches. This was, of course, untimed shooting at a leisurely pace. Switching things up to rapid-fire, the groups remained small. Suffice to say this is a precise pistol.

The trigger of the pistol is a three-hole skeletonized design. Using my Lyman Digital Trigger Pull Gauge to find the average of ten measurements the trigger measured 3 pounds, 8 ounces. It does have an adjustable reset screw. The trigger has a clean break and brief reset, making it easy to run at faster speeds with no problems whatsoever. This is a good factory trigger. Zero complaints.

The DDA 1Omm 1911 has a skeletonized three-hole trigger with a clean break and short reset. (Photo: Katherine Ainsworth Stevens)

Safeties on the gun are the expected grip safety and external thumb safety. Controls such as the magazine release and slide lock are textured for easier use.

Something worth mentioning about this 1911 is its barrel bushing, which is rock-solid. Wiggling and shifting of a bushing can affect accuracy, not to mention that it bears testament to the overall quality of a 1911. The DDA 10mm 1911 has good fitment of all its parts. It’s a well-made gun and it is clear that attention was paid to design and detail.

If you’re in the market for a 10mm 1911 this Devil Dog Arms model is definitely worth serious consideration. This is a cartridge that’s great for self-defense and also fully capable of handgun hunting use for everything from coyotes to deer.

As with any gun, you should be familiar with the penetration of the load you intend to use for self-defense which is one of many reasons I’m a fan of frangibles. Sinterfire and Inceptor both make defensive frangible rounds well-suited to self-defense that negate much of the over-penetration concern.

Yes, this gun might be too large for you to carry concealed using your usual methods but you can always use a cover garment rather than using an Inside the WaistBand holster. There’s always open carry, too, depending on where you live.

This is a reliable, precise, quality 1911 chambered in what happens to be my favorite handgun cartridge. Devil Dog Arms did a stellar job. 10/10 recommended.

Kat Ainsworth Stevens is a long-time outdoor writer, official OGC (Original Gun Cognoscenti), and author of Handgun Hunting: a Comprehensive Guide to Choosing and Using the Right Firearms for Big and Small Game. Der Teufel Katze has written for a number of industry publications (print and online) and edited some of the others, so chances are you’ve seen or read her work before, somewhere. A woman of eclectic background and habits, Kat has been carrying concealed for over two decades, used to be a farrier, and worked for a long time in emergency veterinary medicine. She prefers big bores, enjoys K9 Search & Rescue, and has a Master’s Degree in Pitiless Snarkastic Delivery. 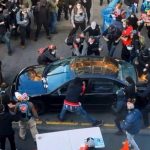 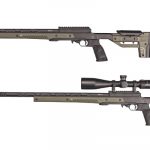