Shadow Systems, an American-based firearms manufacturer, has taken its popular DR920 9mm pistol and given it an upgrade to the refreshed model named the DR920L. The DR920L gives the shooter the edge when accuracy and speed matter, according to Shadow Systems.

The 9mm striker-fired pistol is built on the Shadow-System-tested DR full-sized frame, with a 5.3” barrel and full sight radius to make the company’s fastest uncompensated design. Shadow Systems states the DR920L has best-in-class accuracy and control with rapid fire.

The 416R stainless spiral fluted match-grade barrel fits inside the 17-4 stainless steel slide for an overall pistol length of 7.25”. The slide has top serrations, window cuts, and directional serrations at the front and rear. The rear black serrated sight has a tritium dot with a green outline front sight for easier target acquisition. If that’s not enough, the slide is optics-cut to accommodate most red dot sights directly on the slide without an adapter.

To go along with the accuracy and control, the frame has interchangeable backstraps. These allow the shooter to adjust the grip angle to fit their natural shooting position. The grip also features an extended beavertail and aggressive trigger guard undercut to reduce recoil and add to the controllability. The aggressive wrap-around texture on the frame keeps the pistol firmly in place for solid shooting.

The DR920L features a drop-safe aluminum trigger with a flat face. It has a crisp, tactile reset with about a 4.5-pound trigger pull. It weighs just over 22 ounces and has a magazine capacity of 17+1. 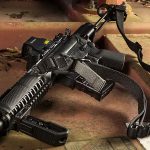 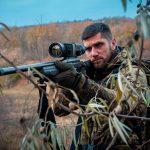