Whether you’re in the market for rifle or handgun ammunition, one brand you’re likely familiar with is Remington. The centuries-old company produces a comprehensive line of ammunition for everything from hunting to self-defense and everything in between. This week, the company announced a trio of products, one of which is an entirely new cartridge: 360 Buckhammer, Remington Range training loads, and Premier Long Range for hunters. The newest additions to Big Green’s family of products promise to perform well and broaden your shooting horizons.

First up is Remington Premier Long Range, which the manufacturer states is designed for match-grade accuracy and terminal performance at a variety of distances. Made with dedicated hunters in mind, Premier Long Range is being offered in a number of calibers. This load utilizes the proven Speer Impact bullet which offers bonded construction and high weight retention for ethical, one-shot kills on game of all sizes.

The bullet is designed with a tapered hybrid ogive, boat-tail, rear-adjusted center of gravity, and trademark SlipStream Tip. These details work together to deliver high ballistic coefficients. This is a flat-shooting bullet designed to perform even at long distances. Other components are made by Remington Premier. Available calibers include 6.5 Creedmoor, 270 Win, 7mm Rem Mag, 30-06 Springfield,  308 Win, 300 Win Mag, and 300 Rem Ultra Mag.

Next up is Remington Range, a new training ammunition designed for running drills and honing skills at the range. This ammunition has a full metal jacket bullet and utilizes the company’s Kleanbore primer for less fouling of your gun’s barrel. The propellant is temperature stable for consistent results. It’s currently being offered in 9x19mm Parabellum and 40 Smith & Wesson.

Finally, we have 360 Buckhammer, an entirely new cartridge. The company states that 360 Buckhammer is a straight-walled cartridge designed for lever-action and single-shot rifles. It has a listed effective range on game of approximately 200 yards. The first two offerings of the round are in the company’s proven Core-Lokt line. Reportedly,  360 Buckhammer produces 35% more energy than 350 Legend and has a muzzle velocity between 2215 and 2400 feet per second. The bullet diameter is .358 inches.

MSRP varies by product and quantity. 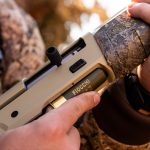 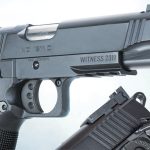