The Stoeger STR-9MC is a 9mm micro-compact striker-fired pistol in a value price bracket.  It has all the features found in a full-sized STR-9 but in a package that can be concealed easier.

The STR-9MC Micro Compact has a 3.29-inch barrel and is 6.1-inch overall length. It weighs 18.5 ounces and can be easily carried in an OWB or IWB holster, in a purse, and in other areas. It features a loaded chamber indicator on the top of the receiver that automatically raises when a round is in the chamber, removing the need for any press checks.

The STR-9MC reportedly has an outstanding trigger and multiple sight options, in addition to the snag-free design of the three-dot sight system. In certain models, tritium night sights are available along with different mounting plates for other optics.

The pistol has a black synthetic, nitride-treated slide with an integrated rail for mounting accessories if wanted. The grip features loads of stippling for better purchase in the hand to go along with the slide serrations for easier handling.

The basic STR-9MC variants start with an MSRP of $399 while the three-magazine, optics-ready models have an MSRP of $479. The Stoeger STR-9MC pistols, and other STR pistols, can be seen at SHOT Show booth 13238. 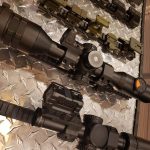 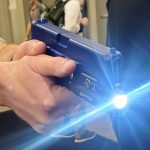