Sig Sauer is producing a wide variety of products these days. Back when I was a kid, Sig made the P series all-metal pistols, and that was it! These days they make everything from pistol braces to optics. One of their lowest price point optics is the SIG Romeo-MSR. The Romeo5 used to be the budget optic, but somehow Sig brought out an even lower cost optic in the MSR. The question we have to ask ourselves is this, is the Sig Romeo MSR worth a damn? Well, let’s torture one!

Breaking Down the Sig Romeo-MSR

The Sig Romeo-MSR presents you with the most basic of red dots. It comes with a 1.41 M193 skeletonized riser, is powered by a CR1632 battery, packs 20K hours of battery life, and gives you a 2 MOA red dot reticle. It’s very simple, but surprisingly you get ten daylight settings and two-night vision settings.

The turret that controls the brightness level is stiff as hell, but it seems to loosen up the more it’s used. It’s all very simple and efficient. You don’t have to be super fancy when it comes to red dot optics, and the Sig Romeo-MSR keeps things basic to drive down the price and provide a high-quality optic at less than $150. 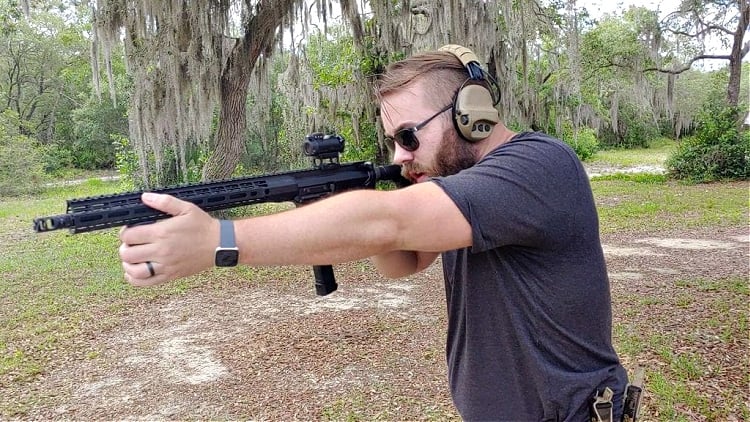 The EPC served as the testing platform for our torture test.

I zeroed it and did a little shooting with my Aero Precision EPC. I wanted to get to know the optic a bit. Take it on a date, get some drinks, become friendly with it before I showed it to my dungeon. If I wanted to see the optic fail, I needed to know how it worked and to have a basic baseline for the optic. I found mounting, zeroing, and shooting to be easy with the Romeo-MSR. This isn’t a full review, but I did find the Romeo-MSR to excel in the basics of being a red dot sight.

I could hit my target, and I could see the dot in all lighting conditions, and had zero issues mounting or zeroing it.

Let’s Mess the Romeo-MSR Up

Let’s go gentle at first; really, take our time introducing the SIG Romeo-MSR to its brutal but inevitable fate. I loaded up my Blackwater Sentry 12 shotgun with some full-powered buckshot. It’s a 1300 FPS Rio load that throws back some serious recoil in a pump-action shotgun. I didn’t re-zero the gun to the shotgun. 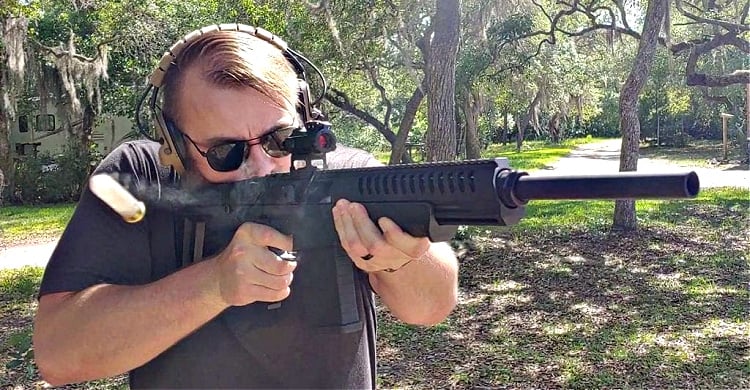 Can a shotgun’s recoil knock the zero off?

I just wanted to see if the recoil could toss the zero off. I notated that I mounted the optic between my T8 and T4 slots on my EPC. I spent to next 20 minutes blasting through this cheap, crappy buckshot, and my shoulder felt the pain. After ten mags worth of buckshot, I popped the Romeo-MSR off and plopped it back onto my EPC.

Let’s try something with a little more ass to do it. I grab my Springfield AR-10 pistol. It sports a very short barrel, and the stubby little bastard is basically a battle ax. It jumps, bucks, and recoils, but holy crap, it’s fun to shoot. With that much recoil, I thought it might be a fun contender to see if the Romeo-MSR maintains itself.

I loaded up a few 20 round mags and the Magpul D50 and let loose with it. I zeroed it first, but after that, it was all about rapid-fire drills. We hit all the classics like the Mozambique drill, the VTAC 1-5 drill, Snap Drills, and Box drills. All requiring you to fire fast and firing fast with a 308 caliber semi-automatic pistol isn’t exactly easy, but holy crap, is it fun.

The Saint Victor harmed the optic nigh.

Of course, I also did a 20 round mag dump. It wasn’t my ammo, so I didn’t mind wasting it. At the end of the day, I backed off to 100 yards, took a stable benched position, and took aim at a 10-inch rifle gong. I heard the song of my people, and its instruments are lead and steel. The Romeo-MSR held zero without issue.

(Holy crap, did that handguard heat up, though.)

Alright, so it survived the recoil of both a shotgun and 308 caliber pistol. Not a big deal, but also not bad for a budget optic. It’s not too surprising when an optic this affordable loses zero when faced when lots of recoil in a short period of time. I was out of 308, so I tacked the Sig Romeo-MSR back to the EPC, re-zeroed it, and notated what rail sections it occupied. It wasn’t going to stay there for long.

Watch it fall and suffer!

I popped it off the EPC and tacked it on to an ASP Red Gun. Specifically an HK 416 red dot with plenty of in-spec optic rails. I took that mother trucker and threw it! I tossed it across my driveway, then dropped it from shoulder height. I did both a dozen times. I tried my hardest to drop and throw the gun at a variety of angles.

The Romeo-MSR bounced, thudded, and skirted across the ground. After that, I popped the Romeo-MSR off the red gun and placed it back on the EPC. I put it on the exact section of rail I zeroed it on. I loaded a few 9mm pills into the EPC and let it go. It held zero without issue. 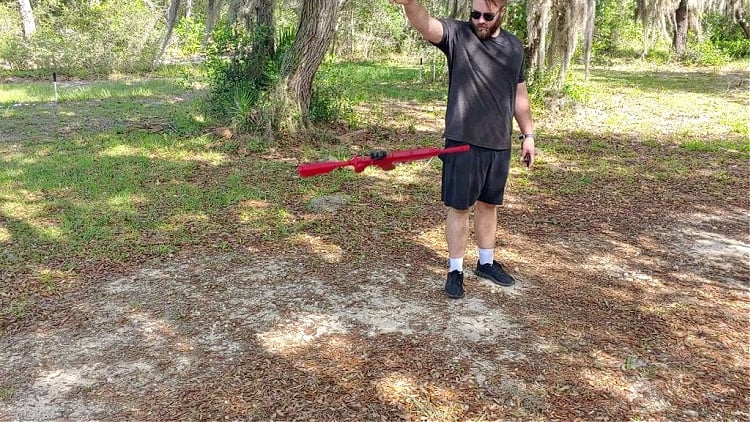 Excuse the dad wear, it was leg day and I’m a nerd. However, the Romeo-MSR took all the falls and throws I tossed at it.

Outside of some basic scrapes and dirt, the Romeo-MSR remained untouched. Nothing was broken, cracked, or challenged. At this point, I was quite impressed by this little budget optic. I won’t lie; I wanted it to break. I wanted to find the stress point that would make this thing crack. Recoil and drop tests didn’t do it, so what about water?

Going for a Swim

The Romeo-MSR brags about an IPX7 rating. This means it can be submerged. I did just that, in my wife’s nice Tupperware. I learned two things. One, there is such a thing as nice Tupperware, and two, the Romeo-MSR can swim! Well, it can sit its ass in water for half an hour.

Let’s take the MSR for a Swim.

I dunked it, let it sit, and carried on with my business. My alarm went off thirty minutes later, and I retrieved the potentially waterlogged optic. The Sig Romeo-MSR worked without issue even after its bath.

The Heat Gun Vs. the Romeo-MSR

Remember when people discovered that Eotech had a zero-drift when the optic got too hot? Well, that inspired me to grab my heat gun and give the Romeo-MSR a little warm-up. I couldn’t find operating temperatures from Sig, so I used the operating temperatures of Aimpoint. Aimpoint makes a much more expensive optic than the MSR, so it seemed to be a high standard to meet.

Aimpoint says their optic works up to 160 degrees, so I wanted to heat the MSR up to 160 degrees and see what happened. I propped the gun and optic up and rotated the heat gun around the optics hitting all three sides. 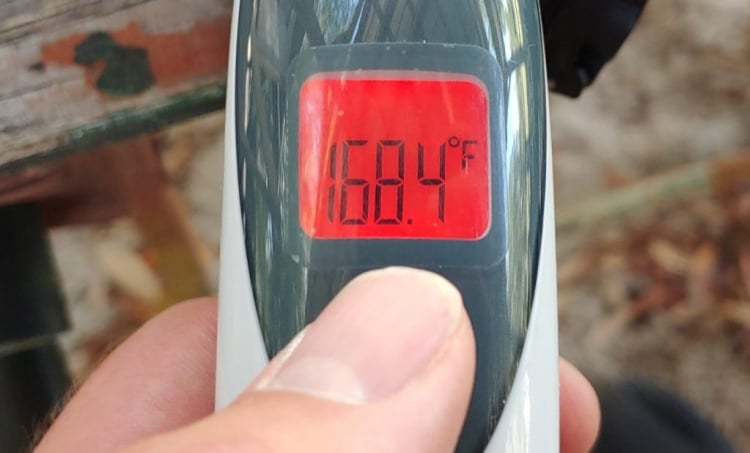 My Romeo-MSR- has a fever.

I periodically used a digital thermometer to check the pulse of the Romeo-MSR. I hit 160 to 168 on three sides of the optic. I let it cool for a few minutes as I reloaded the EPC. I sighted in on a 6-inch gong, dead center, and missed.

Yep, all three shots flung to the right of the gong. It wasn’t just me. I grabbed the zero target I used previously and fired two groups of three rounds. Both groups hit to the right of my initial zero.

Red was my first group, green my shots post zero, and blue was the zero divergence from the heat gun.

This photo illustrates the zero drift. The red group was my initial shots fired while zeroing, the green group was my gun zeroed, and the blue groups were after the heat gun applied pressure to it. A quick rotation of the windage turret dialed it right back to zero.

If I heated it up, I had to try it against the ice, right? Well, I didn’t have the capability to drive the temperature down to -40 degrees. I could freeze it, though! I tossed it into a zip-lock bag and threw it in the not-nice Tupperware, and let it freeze completely.

Can ice kill it?

I went to bed, had a great night, and woke up the next morning. At this point, I fully expected it to be off, dead, and gone. I pulled out the frozen optic, and through the glass, I could see that it was still functioning, still on, and ready to work. So I made coffee and defrosted the thing.

Look closely, you can see that frozen bastard still working.

Guess what? That mother trucker still works. Not only that but there was no noticeable zero shift when I reattached it to the EPC and hit the range.

I wanted to break the Romeo-MSR through conventional means or as close as I can get to conventional means. I couldn’t, so guess what? I’m going to shoot it. With a shotgun. Specifically with birdshot. I backed off to 15 yards, set the optic up on a box, and let it have it.

I’m trying to kill it, I really am.

Seeing my enemy fly off of its cardboard perch as birdshot impacted it brought a feeling of joy to my heart. That had to kill it, right? No way it still works. 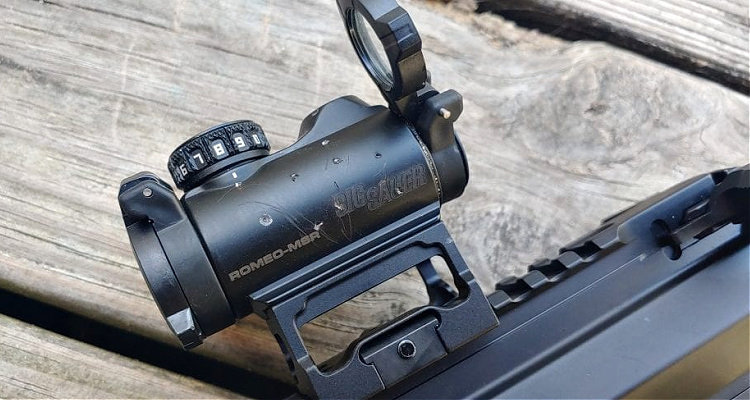 I shot it, and it still works and holds zero.

I skipped down to the range, fished the Romeo-MSR out of the dirt, and peered through it. That little red dot teased and touted me, insulting me without words. It still worked. I put it on the EPC and tested it’s zero.

So I broke the glass, but couldn’t kill the optic.

It held freaking zero. The rear lens cracked and broke, and the outside of the optic had pellet impacts all over it. But it held zero and still functioned. Sorcery, SIG Sorcery. 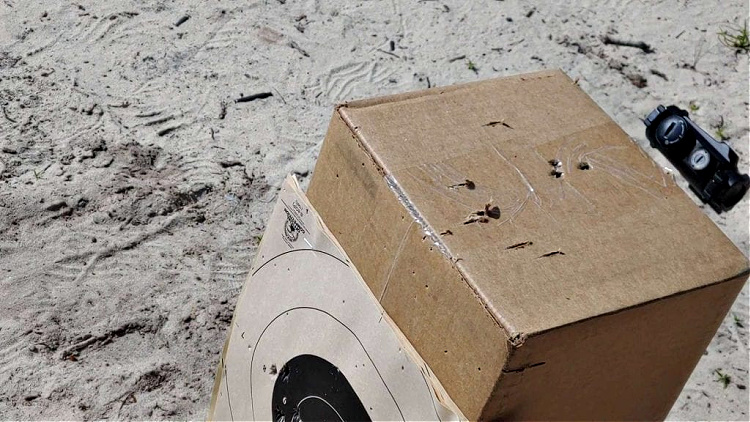 A load of birdshot took it right off its perch.

I’m done; I give up. This thing is literally bulletproof. It’s an optic that costs less than $150, and the only thing all my abuse did was make it lose zero via heat. Even then, the zero was lost, but not that bad. It wasn’t a big enough shift to makes its way off a B8 target. Sig’s little Romeo-MSR might be the most durable budget optic on the market. 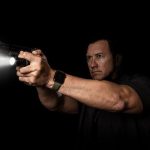