Everything retro feels to be in vogue again, or so it seems. Companies have been recycling older designs or looks and repurposing them for today’s market. The SureFire SFA2-556 is a great example of this, bearing a striking resemblance to the older A2 birdcage flash hiders of yore but with current technology and accuracy.

The SFA2-556 has a closed-tined adapter that was specifically designed and engineered to be used with any SureFire Blank Firing Adapters or Mil-Spec BFAs, specifically used in training purposes that need a blank firing adapter. Additionally, SureFire states that the SFA2-556 also acts as a precision mounting platform for the SureFire SOCOM Fast-Attach Suppressors or can be used as a standalone muzzle device.

The SureFire SFA2-556 comes threaded 1/2×28 for the 5.56 caliber and represents the traditional birdcage flash hider with handy wrench flats that make installation a breeze. With a similar construction to its other SOCOM muzzle devices, the SureFire SFA2-556 is constructed of stainless steel that has been precision cut and treated for durability. According to SureFire, it is highly resistant to gas and particle erosion thanks to the DLC heat-treated coating the flash hider receives.

One hurdle in shooting suppressed, or not suppressed for that matter, is a repeatable zero with the system. Thanks to the multiple bearing surfaces on the SFA2-556, the mounted suppressor aligns correctly every time. The overall size of the mount, at just 2.9 ounces and 1.9 inches long, means the weight will be negligible and very similar to other muzzle devices on the market. 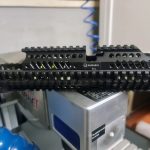 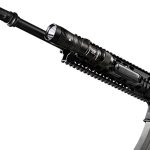