With SHOT Show 2022 approaching fast, new product releases are all the rage. Smith & Wesson is near the front of the pack with their new CSX subcompact pistol. Aimed squarely at the concealed carry crowd, the Smith & Wesson CSX looks to challenge the Sig Sauer P365XL and the Glock 48X for market share. That’s some stiff competition, so Smith & Wesson, not content to just toss out a clone of those guns, or a revamped M&P Shield, has gone back to a tried-and-true design that should appeal to the gun community.

In the video above, Allen from Olde English Outfitters gives us a quick rundown of the CSX’s features and his first impressions of the gun. The first thing Allen points out is that the CSX is a 1911-style single action only hammer fired gun. Chambered in 9mm Luger, the CSX, as noted above, is the latest in the trend of small guns with higher capacity. Because of its styling, Allen places the gun as the successor to the Colt Government .380, the Sig Sauer 238 Series, the Springfield Armory 911 Series, and the Kimber Micro 9 Series.

Here’s a quick look at the CSX’s specifications:

Allen estimates the price at around $550.00 and, with the listed MSRP of $609.00, he’s probably pretty close on that. The barrel and slide feature Smith & Wesson’s Armornite finish so, as Allen says, they should be very durable and rust-resistant. The CSX is, unusually for a small carry gun, all-metal, making it a bit heavier than other guns of its size. But Allen says, and I agree, that extra weight is okay, as it probably helps a bit with recoil and, at 19.5 ounces, still isn’t heavy by any means.

The CSX has lots of nice features as well. As Allen says, “This is a lot of gun.” Here’s a list of those features:

The metal sights are nice, especially with the square profile rear sight. They should be very durable. I really like the inclusion of the cocking ears. As I get older, I wish more guns had those. The reversible mag release is actually a different part that comes with the gun. You just switch them out if you want. The gun ships with one extra backstrap that requires a tool to depress the plunger holding it on the grip. The tool is provided. It looks pretty stiff but, realistically, how often are you going to the change the backstrap? The beavertail is plenty long to guard against hammer and slide bite.

There are a few things on the downside, but they’re minor. First, there’s no front rail. Personally, I don’t generally hang stuff from the front of guns this small, so it’s no big deal to me. But some might, so it would be nice to have the option. Second, the 12-round mag extends further from the grip, so it has a sleeve to fit in the space between the bottom of the grip and the mag floorplate. The sleeve isn’t anchored, and it slides up and down the mag, which Allen didn’t like. But he took it off with no ill effects and suggests that S&W anchor it in the future. There’s no loaded chamber indicator, though there is an inspection hole on top for press checks. No big deal to me, but it might be for some. Finally, the CSX is not optics-ready. Maybe that’s a thing for you, maybe not.

The trigger is described as being “pretty flat” with an integral safety blade for the internal firing pin lock. Allen said the trigger was a little gritty at first but got better as he fired it more. The trigger pull is light, as you’d expect from a single action gun.

Overall, Allen was very impressed by the CSX. He says, “It sits in the hand really well. Doesn’t bounce around much.” The recoil was mild for a gun this size and it shot very well. He didn’t put it on paper but expects it to group well. “They’ve done a good job on this,” he says. “If you like the single action gun…hammer fired pistol, this is a good thing to look at. It packs a lot into a pretty small package. We’re going to tip our hats to Smith & Wesson on this.”

It’s pretty standard for companies to jump into trends to sell some guns while things are hot, like the small, higher capacity carry guns are right now. But it looks like S&W has not only jumped in but offered something that adds to what’s out there instead of just copying it. It’s probably a good move and, as we all know, it’s nice to have options. 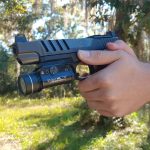 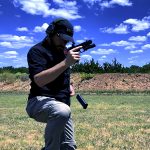