When Taurus decided to take their revolvers to the next level, they launched the Executive Grade line. First came the 856, and now they’ve launched the Taurus Judge Executive Grade. This brings about a new era of the Judge, now a revolver with enhanced features capable of greater accuracy and improved comfort during live fire. The Judge Executive Grade promises to be a stellar option for gun owners looking for their next hunting carry gun, as well as a great choice for shooting targets and general use.

The new Taurus Judge Executive Grade boasts a number of upgraded features. Perhaps its greatest enhancement is a hand-fitted action that is, of course, capable of firing both .410 bore shotshells and .45 Colt. The gun’s accuracy using 45 Colt is improved over the original platform. You bring the shooting skills and let the Judge do the rest. According to Taurus, during testing the revolver impacted targets out to a distance of 100 yards. This success elevates the Judge to a fantastic option for defensive use that can also accurately strike dangerous game and predators at greater distances.

Another feature courtesy of the Executive Grade treatment on the Judge is a highly visible brass bar front sight. The use of an eye-catching material that contrasts with the frame of the revolver helps improve target acquisition and assists shooters with follow-up shots as well.

The Judge is designed to be a versatile revolver that can be used for many applications including hunting, self-defense, and target practice. It has a 5-round capacity and, as mentioned above, takes both 410 bore and 45 Colt. The fact that it can run shotshells, as well as cartridges, broadens its uses. Taurus hopes this will be your next backcountry gun, and it certainly has its appeal for that purpose. Of course, this is a revolver that can go from the woods to the bedside table with no issues, so it’s not only for outdoorsmen. Home defenders will love this gun as well.

Features of the Taurus Judge Executive Grade include:

What do you think, will this be the Judge that joins your gun collection? Share your thoughts in the comments section.

MSRP for the Taurus Judge Executive Grade is unknown at this time. 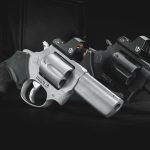 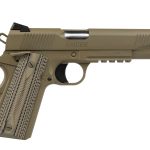