FN was smart and released 5.7 caliber guns like the Five-SeveN pistol and the PS90 to the civilian market, but HK has never even considered releasing a civilian MP7. The round has languished in the civilian market, even though Fiocchi makes plenty of it. The FourSix is a Banshee Mk4 AR pistol, and CMMG’s also made a 5.7 Banshee, so this isn’t an all or nothing.

Why would I, as a civilian, choose the 4.6x30mm over the 5.7? Well, mainly because 4.6x30mm can be cheaper. Significantly cheaper than 5.7×28 because it doesn’t require the lacquer coating the 5.7x28mm has. The big difference currently is all about economy of scale, so if the 4.6 gets more popular, the ammunition could be cheaper than the 5.7×28.

But Why Not Just 9mm?

Why use 4.6x30mm over a simple 9mm subgun? I have a 9mm Banshee, and I love it. Is 4.6x30mm ever going to be 9mm cheap? I can’t say, but it will take a long time for it to reach 9mm prices. However, there is a reason these PDW rounds were developed. NATO wanted a round that outperformed the 9mm from an SMG-style platform. The main concern was max range and armor-piercing capability.

The CMMG FourSix packs an eight-inch barrel, and honestly, I’m using a red dot, but I think a 1-4X LPVO or even a 3x or 4x prism would be a superior option to take advantage of the gun’s accuracy and max range. At 100 yards, in a good stable position, I’m scoring beautiful headshots on an IPSC target.

It’s not a proper rifle round, so you won’t get the same superb accuracy out of it as a 1 MOA 5.56 rifle. However, it’s easily accurate enough for practical applications. I can quickly kill coyotes at that range with decent headshots. That spitzer-style bullet and retained velocity ensure good penetration.

The CMMG FourSix uses the AR platform we all know and love. In terms of changes to the gun for the 4.6x30mm, there aren’t many. First, the magazines are proprietary, but they are built in the shape and design of a standard 5.56 magazine. This allows the magazines to function in a Mil-Spec lower receiver so you can purchase a CMMG build kit and build your own FourSix.

Additionally, these magazines fit AR 15 magazine pouches without issue. This opens up your ability to carry spares with ease. The CMMG 4.6x30mm magazines hold 40 rounds of 4.6x30mm and interact without issue with your last round bolt hold open.

The gun utilizes an 8-inch barrel, which taps out the velocity of the 4.6x30mm round. At the end of that barrel sits a CMMG SV brake. The FourSix comes with an M-LOK handguard, a CMMG/SB Tactical RipBrace and tube, as well as a Magpul pistol grip. The ergonomics are standard AR-15 with an ambidextrous safety and massive charging handle.

Like any CMMG AR, the FourSix is exceptionally well made. The receiver fit is tight, the castle nut is staked, and the handguard isn’t moving. Also, it uses the standard direct impingement system like every other rifle caliber AR-15.

The use of CMMG’s new micro length gas system and micro gas block make the FourSix a fascinating design that doesn’t require a blowback action. The FourSix is super lightweight at only five pounds and six ounces.

Is the CMMG FourSix the best choice for home defense? Best is relative, and I’d say a 5.56 rifle is likely best for most people. However, if you are a petite person, someone with strength issues, or disabled, I’m more likely to recommend the 4.6x30mm to the 5.56 or even the 9mm. If you don’t plan to train, the 4.6x30mm is also quite handy.

At the range, the gun barely even moved between shots. I started firing combating drills like failure to stop, box drills, and the VTAC 1-5 drill. The gun barely moves between shots. It handles like a loud 22 LR, to be honest. I could shoot blazingly fast and accurately. With the light recoil, my double-taps were nearly on top of each other.

For failure to stop drills, I was scoring below 1.5 seconds at 15 yards. I dropped rounds directly into the -0 of the head and chest of my targets. The super-light recoil and the non-existent muzzle rise make it very easy to control. The fact the gun is light and short also helps keep things sweet and easy to control. I can dump long strings of fire into the target with the gun barely moving.

I might need that because, ultimately, the 4.6x30mm doesn’t have the energy of a 5.56, and expansion isn’t nearly as good as a 9mm. The main advantage is good penetration and the fact the round tumbles. The 4.6x30mm penetrates deep enough to kill but relies a lot on shot placement and lots of rounds. The 40 round magazines and easy-to-control design make it easy to put several rounds into an attacker with absolute ease.

I fired the 9mm Banshee side by side with the 4.6x30mm FourSix Banshee, and the difference in recoil is night and day. The 4.6x30mm delivers much lower recoil and gives me 40 angry little bees in the magazine. Handling the FourSix with a single hand shows a serious advantage to the 4.6x30mm in terms of control and accuracy.

The Navy SEALs, specifically DevGru guys, use the MP7 with the 4.6x30mm round and have put lots of bad guys in the ground. They went on the bin Laden raid and have turned lots of terrorists into good terrorists. According to the limited information on DevGru post-ops, it seems like more is better with the MP7. They often dump a controlled burst into the bad guy.

Does that mean it’s necessary? Well, maybe. But to be fair, if someone is worth shooting once, they are worth shooting over and over. You don’t shoot once, pause, and make sure the bad guy is still a bad guy. You can shoot a half dozen rounds in a second, which might be pretty tempting in a violent encounter.

The big advantage of the 5.56 round is the fact that it tends to tumble and lose energy quickly through drywall. Buckshot and 9mm tend to keep popping through, but 5.56 tumbles. 4.6x30mm, in theory, should do the same. The little 4.6x30mm should strike, tumble, lose energy and help prevent overpenetration. The best way to prevent over-penetration is not to miss, and the CMMG FourSix makes that easy, but crap happens.

Call me a fan. I hope the CMMG FourSix becomes a success and more and more companies produce 4.6x30mm firearms. I want to see the price drop for ammunition, and I think the 4.6x30mm could be a great round, in short, PDW-type platforms. The CMMG FourSix will certainly help the 4.6’s case as a fantastic firearm. 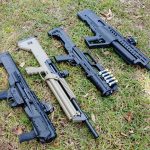 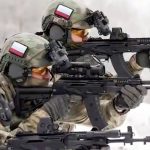