The Gray Man recently hit Netflix. Finally! Netflix has something I actually wanna watch! The Gray Man movie stars Ryan Gosling as Court Gentry/Sierra Six, Ana de Armas as Dani Miranda, Chris Evans as bad guy Lloyd Hansen, and even Billy Bob Thorton as Donald Fitzroy. This balls-to-the-wall action flick got a theatrical release and then, a week later, popped up on Netflix. I grabbed a Guinness, kicked up my feet, and dived in with my lovely wife, and we made a Saturday night of it. It’s a summer action flick that really emphasizes the action and is a fair bit of fun to watch.

Supposedly Based on the Books

In the gun culture, we recognize the term Gray Man as someone who doesn’t stand out. A gay man doesn’t wear cargo pants, open carry, or have a closet full of Grunt Style shirts.

This movie does not use the term the same way.

The Gray Man is based on a series of books written by Mark Greaney, and the term is accurately used in the books. Court Gentry, our protagonist, is a man who can disappear and blend in anywhere at any time, and he uses that to his advantage.

In the movie, the term seems to be misunderstood, and it’s more or less used to describe someone who isn’t good or bad, someone who operates in the gray. This sucks because it could be a fun device that makes the movie a little different than your average 2020s action flick.

That’s not the only thing that is different from the books. It’s almost entirely different from the books. In fact, it barely has anything in common with the book series outside of character names. Gentry still works for the CIA, Lloyd is a contractor, and Fitzroy recently retired from the CIA. There is a Mcguffin in the form of a data chip that all the bad guys want, and chaos develops along the way.

Why change the story? I have no idea. The original Gray Man book would be a seemingly easy movie to make but would be more Bourne Identity than John Wick.

How About the Gray Man Movie?

Well, it’s not a bad film by any means. You could have just changed the names and tweaked the story just a bit, and boom, it could be an independent franchise. It starts with a bang and has tons of bangs between the intro and the credits sequence. It’s a rapid-fire movie that constantly accelerates forward. It doesn’t waste time, but it also never lets anything set in. It’s like boom, new character….and boom, another new character. Oh wait, there’s something else!

For a summer action flick, I don’t mind much. The movie has several insane set pieces and action sequences. It’s not grounded in any way whatsoever. In fact, it’s almost Fast and Furious levels of over the top.

Not exactly an espionage and thriller-type film.

The Gray Man has plenty of levity, and a humorous tone pops up whenever anything gets too down. My favorite is that even though these people are killers, assassins, and spies, there is almost an Office-like atmosphere between them. They bicker, argue, and tease each other as coworkers would, and I found it charming.

There is also some stuff shoved in that the movie never earns. Gentry has an older brother/uncle-like relationship with Fitzroy’s niece. We get about two minutes’ worth of relationship building that does nothing to convince me that those two people care about each other.

Gosling is great as what is essentially a constantly bored and seemingly inconvenienced guy constantly put into rough situations. Those inconveniences are people who want to kill him.

Chris Evans plays a sociopathic CIA washout turned government contractor who is hired by the CIA. He dresses like a dad from the 1950s. He is hilarious and also a little unhinged.

Ana de Armas plays a CIA spy who teams up with Gentry and also is forced to constantly save his life. She doesn’t get a lot to do but is charming and enjoyable. The same could be said for Billy Bob Thorton, and he’s underused but typically fun when on screen.

Everyone else flows along. A Bollywood star named Dhanush pops in and makes an impression, but it feels like a franchise setup and tease more than anything valuable. The gentleman known as the cringeworthy ‘Lone Wolf’ call sign features some great fight choreography and has a mysterious edge to him.

We see lots of gunplay, and it’s all fun. The Gray Man movie went straight to the School of John Wick gunfights, and they are carefully choreographed to look as cool as possible. Sadly, it’s not to the level of John Wick or Extraction. We see lots of cool stuff, like when two guys are fighting for a gun, and in the middle of the fight, Gosling unloads the gun to end the fight over it. Another has Gentry using someone’s reflection to locate and target them before firing through the floor below him to kill the guy.

A lot of the action gets downright silly with that Fast and Furious level of chaos and destruction happening. We see tons of mercs trying to kill Gentry, but he always evades death even when mercs use mounted M32-like grenade launchers, Akimbo.

We see lots of fun guns, from USPs and Glocks to Scorpions and CZ P09s. One scene takes place in Prague, and the police are depicted (accurately) use Scorpions and P09s. We even see a Cornershot in the intro, buts it’s never used.

There is plenty of plot armor for the main characters, like Ana de Armas sprinting but being able to kill a sniper by hip firing a grenade launcher. The sniper has a bolt action, scoped rifle mounted but apparently could only miss.

One of my favorite action scenes doesn’t even involve guns. It has Gentry killing several bad guys with trauma shears, and I love it.

If you have Netflix, then sure. It’s a fun watch, but I wouldn’t go to a theatre to see it. Nor would I subscribe to Netflix just to see it. It’s not as good as the early Bourne movies and not as action impressive as Extraction. Still, it’s fun and does have great characters with (mostly) good chemistry.

Check it out, and if you’ve already seen it feel free to let us know what you think below. 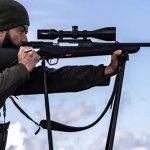 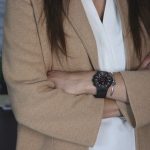