The Israelis and their domestic firearms production has made some seriously awesome contributions to the world of firearms. We got the Uzi, the Galil, the Tavor, and of course, the Jericho series of handguns. Unlike the other aforementioned firearms, I feel the Jericho series of handguns is nowhere near as respected or as appreciated. Admittedly, the Jericho pistol series does what most middle eastern and Eastern European handgun manufacturers do and just copy the CZ 75. 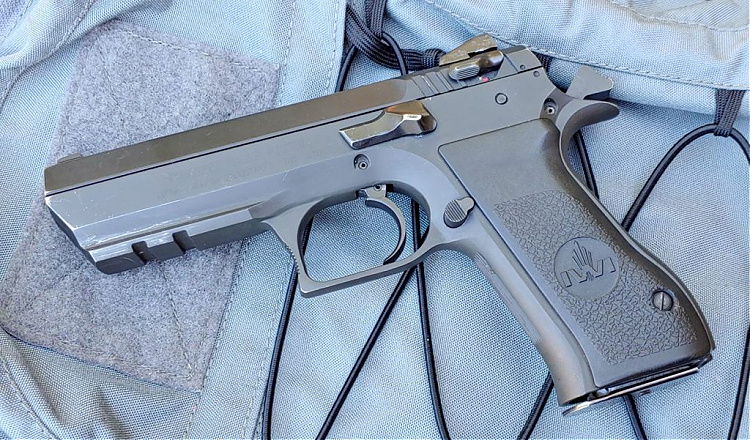 Sleek, sexy, and dangerous looking. Oddly enough in film and media the IWI Jericho pistol is often used by the bad guys.

Well, kind of. The Jericho came from the year 1990 and has been imported under various other names. This includes the Uzi Eagle, the Desert Eagle, the Baby Eagle, and obviously as the Jericho. Israeli Weapon Industries tried to cash in on the popularity of the Uzi and Desert Eagle titles. The Jericho does have a passing resemblance to the Desert Eagle with the triangular muzzle end. Other than that and the fact they are both semi-auto handguns, the two guns have nothing in common.

Israeli’s Jericho pistol is a service pistol. A gun designed for military and police use primarily, but like most guns, it can be regulated to concealed carry by the dedicated. My particular model is the all-metal variant, stamped Desert Eagle Pistol, and is a 9mm variant. It features a Picatinny rail, a DA/SA action, and a slide-mounted safety.

The Jericho has the shark-like front end that resembles the Desert Eagle just a bit.

There are tons of variants of the Jericho pistol. This includes polymer frame models, various calibers, including the now-extinct proprietary .41 AE. Safeties have varied between frame- and slide-mounted designs. Most modern variants sport rails, but early models did not. Jerichos also come in full-size, compact, and subcompact sizes.

Narrowing exactly what the Jericho is, is tough to do. Too many varieties that vary widely, under a wide variety of names, make it tough to say these specific features make the gun a Jericho. There are many Jerichos, but this one is mine.

My big, hefty Jericho pistol weighs a stunning 2.8 pounds unloaded. It’s a hefty girl, like one of those body-positive types that occupy Instagram. I like all metal guns, and I don’t mind heft by any means. The Jericho is easily one of the heaviest 9mm service pistols I’ve ever handled. It’s heavier than the Glock 17, the Beretta M9, the S&W 4506, and 1911 Government models. Heck, it’s even heavier than the CZ75B.

The Jericho utilizes CZ 75 magazines, which are robust, well made, affordable, and plentiful.

This full-sized beast chambers the 9mm round and, as a CZ 75 clone, luckily utilizes CZ 75 magazines. People love Glock magazines, but they should appreciate CZ 75 mags. These magazines are extremely common, well made, and affordable in varying capacities.

I typically prefer decockers over safeties, and when I have to deal with safeties, I prefer frame mounted. Some Jerichos use a frame-mounted safety, but mine does not. Luckily, since this is a clone of the CZ 75, the slide is super short, and the slide-mounted safety is easy to access with just the thumb. The safety is also a decocker, so there is no lock and cocked carry with my Jericho variant.

The safety does act like wings on the slide. Since it’s so small, there is very little slide to grab. The safety adds a little extra grip material for slingshotting this bad bay into action. The slide release/slide lock is my very favorite. Mostly because my sausage thumbs do not pin it down and render it useless, it’s also my favorite because it’s massive and very easy to hit and send the slide roaring home.

The slide-mounted safety acts as wings to grip the teeny tiny slide oh so much better.

A huge beavertail at the rear end protects the webbing of your hand and allows you to choke up nice and tight on the gun. Combine that with the hefty weight and the low slide mass, and you get a very comfortable shooting gun, but more on that later.

Look at this slide release. It’s massive and easy to activate.

IWI fit simple rubber grips to the gun, but they are interchangeable. Plenty of wood, metal, and polymer options exist. Heck, you can even get the grip Spike used on his Jericho from Cowboy Bebop.

….But How Does the Jericho Pistol Shoot?

Like a kitten, it shoots and handles like a kitten. Saying recoil is minimal doesn’t properly describe how this gun handles. It’s super soft and easy to control. You’ll experience very little muzzle rise. All that weight, that high grip, and that low slide mass results in a very easy-to-control firearm. This gun, alongside my CZ 75B, are my favorites for new shooters.

Once a new shooter moves past a 22LR handgun, the CZ75 and Jericho give them a soft shooting centerfire handgun. It takes some of the scary out of the act of shooting a gun and gives them something with a little more oomph than a 22LR.

Look closely and you can see the Desert Eagle markings on my Jericho.

The trigger is very much OK. It’s a contradiction in many ways. The double-action trigger pull gives your finger a workout. It’s extremely heavy and long, although I’ll give credit where credit is due and say it is smooth. The single-action trigger provides a much better experience. It has a slight take up, and then a short ball, and Boom—the gun fires.

It gets an OK rating because, well, a rough double-action trigger combined with a great single action makes an OK overall trigger. The big spurred hammer is easy to cock manually, and single action is how I suggest you chase the dragon with this one.

Heavy is reliable, heavy is capable, and the Jericho pistol is all that. It’s quite reliable and chews through the worst ammo I have on hand to include Winchester Forged. Winchester’s Forged ammo is made by the dwarves Tula fired for QC issues.

I really need some of those Spike special Cowboy Bebop grips.

It even shoots crappy ammunition straight. My 50 yard 10-inch gong test was easily passed with the Jericho… well, as long as I used the single-action trigger. The double-action proved itself capable enough to hit headshots at 20 yards. I think with lots of double-action-only practice, I could get better at it, but I’m not there yet.

The Jericho is a striking pistol that gives you excellent ergonomics and accuracy.

When you steal a little from the CZ 75 series, you better steal the ergonomics. Luckily, the Jericho possesses those same fantastic ergos. The grip slides into the hand and feels like it’s meant to be there. The curves and humps provide a glove-like fit and make the weapon quite comfortable to hold and shoot.

You can reach the controls without changing your grip. Swapping mags, disengaging the safety, and sending the slide flying home are all very easy to accomplish. IWI knocked it out with the Jericho and kept the features that made the CZ 75B such a legendary gun.

This gun has taken an absolute beating but keeps on kicking.

Why the gun industry clamors over the latest Glock but ignores the awesomeness that is the Jericho series befuddles me. The Jericho doesn’t pull punches and delivers a very capable fighting pistol outfitted with fantastic ergonomics, excellent accuracy, and brilliant reliability. Plus, if you ever run out of ammunition, you can beat someone to death with it. 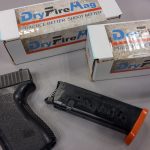 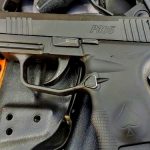