It’s funny, shooting in itself is a very analog sport. It has existed way before the digital world ever was conceived. It consists of metal, wood, glass, springs, and explosions. Some of the digital things that have crept into the long-range shooter’s arsenal range from chronographs, wind meters, laser range finders, and various displays. Kestrel has come up with a few products like the Kestrel HUD that allow you to do some extreme (here come those words everyone loves to hear) “social distancing” while on the range.

Kestrel made their name in the wind meter market, offering them for various industries. The ones we are most interested in are the ones made for shooting… I mean it is what we are all here for isn’t it?

Between time away with the military, range shutdowns due to the pandemic, and a hip surgery I have spent a bit of time playing with my Kestrel 5700 Sportsman that I went through the upgrade process on to make a 5700 Elite — but more on that in another article. I am still getting used to playing with a wind meter when it comes to shooting, having previously used Kentucky Windage or a person spotting for me most of my time shooting.

With the build of The Apologizer (my entirely Canadian rifle project), it was time I got a bit more serious about my long-range shooting. I put in all the info I could (using ammo made for another gun I no longer have but have way too much of) and got fairly decent results for shooting at longer ranges than I normally did. The Kestrel 5700 gave me shooting solutions for various ranges and the menus were fairly intuitive.

When I got my Kestrel 5700 Sportsman it came in a package with a Bushnell Elite CONX laser range finder in a package deal. If you look around some dealers still have this, which is a great package deal saving you some serious coin when starting out.

What was really cool about the package was that through the PFM or pure f**king magic of Bluetooth you can pair your range finder with a Kestrel that is LiNK enabled—meaning it too has Bluetooth in it. This allows both of your fancy electronics to have a fun little conversation so when you take a wind reading and range an object it will spit out the elevation and windage changes required to hopefully hit the target. I would be remiss if I did not mention that a Kestrel wind meter can only take wind readings at your current location. What’s happening downrange can be a completely different thing however it’s a great starting point.

The Applied Ballistics engine in the 5700 Elite does do a fantastic job with elevation, and if the wind were consistent all the way down there would likely be pretty bang on every time. This is, of course, if you do your part and shoot with the fundamentals and input all of the numbers and info into your new pocket wind reading friend. Good ammo that is consistent also helps a lot as the distance grows.

I do still have some truing I need to do with the Kestrel but that will take some playing around with. However, the 5700 isn’t entirely why we are here. No, that’s just one part of the three electronic gizmo trio that does a pretty damn good job acting as your spotter when you’re at the range. The last piece of the puzzle is the Kestrel HUD.

The Kestrel HUD  (Heads Up Display) is a fancy little display you can mount on your rifle or have sitting in the dirt next to you.

It’s built pretty damn rugged. I wouldn’t say it’s Nokia’s old-style-phone rugged, since they will be found by civilizations many thousands of years from now. I will say Kestrel did a good job making something that can take a beating, more importantly—handle the recoil of being mounted to a rifle.

Not only that, it has a temperature working range of -22F to 140F which covers pretty much any weather pattern I care to shoot in. The Kestrel HUD lets you keep your head up with your eyes focused mostly downrange—instead of fiddling with a pile of electronics.

It has several different modes on it. There is a timer at the bottom of the target screen, a DOPE (Data On Previous Engagement) screen, a single target screen that can give you live updates from the Kestrel 5700 if it is in a tripod mount, and of course the Custom Target Screen with up to 10 targets. The DOPE and custom targets screens are only available for the 5700 Elite and up so if you have a Sportsman it’s worth doing the upgrade if these are features you will use.

The screen is super easy to read in the sun as well as in the dark, with its large letters and backlight if you need that. While it is easy to read it is a pain in the ass to take pictures of due to the glossy screen. Had Kestrel gone with something like an E-Ink screen like a Kindle it would be super easy to photograph but slow to update the screen with new info.

It easily mounts to a rifle if you have space on the Picatinny rail for it to attach to. This mount also folds to the side making it easier to store in a bag or case if you don’t want to take it off.

The unit runs off of a single AA battery which is something to consider for battery management purposes. Nothing sucks worse than having one of the gizmos you rely on go down during a stage or while shooting because you didn’t change the batteries or forgot spares. I typically use a Batuca Battery Case since it can store AA, AAA, and CR1234A which covers most of my battery needs when shooting, although our friends over at Thyrm have a really cool new battery case.

I have mostly used the single target and multi-target screens along with the DOPE screen when shooting.

Why do I use the single target and multi-target screens? With my 5700 Sportsman Elite in a tripod that I have set the direction of fire on, I can use the laser to build my target cards for range and get live updates from the weather meter to help me adjust for windage.

I like the DOPE screen for a quick reference on targets at known distances, making my adjustments fast. The only complaint on the multi-target mode, especially for something like PRS where you end up engaging targets at multiple distances and of different shapes, is no ability yet to select pictures to help identify targets. This is where the ability to select from a list of common target shapes might aid in this. With tape and target boards you can draw whatever you want and various reference features which the Kestrel HUD doesn’t have just yet. I say yet because Kestrel is very good at listening to feedback and has the ability to do software updates to their products that add these little niceties in. Hell with the use of the LiNK app on your phone it would make building those target cards really easy. That said, being the tech geek I am, I really like having the three items talking to each other. It makes managing them a ton easier.

Nielsen-Kellerman, the parent company of Kestrel, is very invested in the shooting community. We have heard they ended up purchasing MagnetoSpeed which is pretty awesome for both companies. The MagnetoSpeed chronograph is quickly becoming one of the standards for ease of use when it comes to getting info on your bullet’s speed—not to mention the other innovative items they make like their hit indicator for steel targets. It will be interesting to see how the synergy of these companies ends up advancing the long-range shooting game.

While the Kestrel HUD is no J.A.R.V.I.S. from Ironman it has been a really handy tool in my shooting toolbox and one I hope to get even more use of when ranges allow me to shoot again. Until then, I will be spending my time doing my social distancing in the basement dry firing using the DOPE screen and my Indoor Dryfire Training System. 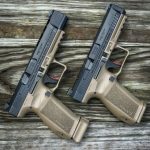