Leave it to Magpul to take a concept that historically sucked and make it great. I’m speaking about drums, of course, and how Magpul figured out how to finally make them work. Historically, drums sucked. And they continued to suck until Magpul figured out how to make them work. They started with the AR 15 and then the AR 10, and now we have drums for the CZ Scorpion and Glock series as well. I got my hands on the Magpul D-50 CZ Scorpion drum magazine and have taken it for a spin.

The Scorpion series has been extremely popular in the world of PCCs and large format pistols. I’m lucky enough to have both the pistol variant as well as the carbine variant. That being said, my rifle variant is the bullpup model, so this will certainly be a unique test.

Magpul modeled the Scorpion D-50 drum directly after the D-60 and D-50 drums. It’s a fair bit smaller and shorter than those two but identical in design. This includes the Gen M3 style design. It features the Gen M3 polymer mix, the Dot Matrix, the easy takedown procedure, and the same load lever design. Even though it’s a well-made drum, you might ask why exactly you would need a Scorpion D-50?

Obviously, the benefit of a drum is to increase capacity without having an obnoxiously long magazine. Magpul did this previously with the 35 round Scorpion magazines but took it a step further with the D-50 and its 50 round capacity. More ammo is better than less ammo as long as the ammo feeding device works, obviously.

That’s always been the real downside of a drum. The feeding devices rarely worked and had a tendency to be maintenance-heavy. Magpul fixed that previously and their drums have been proven to work. In a rifle, obviously, a drum makes sense, but what about a PCC or large format pistol? Well, if you’ve chosen either to be a defensive weapon, then the D-50 CZ Scorpion drum magazine makes a lot of sense.

Using a pistol-caliber firearm means you’ll likely need to fire more rounds to put a threat down. Sadly, pistol calibers can’t meet the power of anything rifle caliber. Having more ammo than less makes sense. The weight penalty for a bedside gun isn’t an issue. You won’t be patrolling with a Scorpion D-50 across the Helmand province.

Plus, in a home defense situation, you won’t be rocking a chest rig and packing a half dozen magazines for speed reloads. As such, the drum offers you almost twice the capacity of a standard magazine. More ammo in the gun means less reloading, and less reloading is a good thing in a fight.

Yes, by the way, you can leave it loaded. Unlike other drums, this isn’t a major issue with the Scorpion D-50 (or any Magpul drum). You can load it JHPs and forget about it.

Obviously, make sure the drum is unloaded prior to taking things apart. Once the drum is apart, you can clean and oil the drum. Magpul previously said that the D-60 and D-50 could go for 1000 rounds between cleanings, and I assume the same with the Scorpion D-50.

The insides of the drum are quite simple, and that makes cleaning them rather simple as well. Simple is good, and you can’t beat simple, especially when it comes to magazines.

Magpul loves to claim the drums are easy to load, and in some ways—they are. The lever that presses the follower down and allows you to load the drum ensures you aren’t fighting a single spring for all 50 rounds. That being said, trying to hold the drum, while holding the lever and putting in rounds will make you wish you had three hands.

Sure, it’s not difficult from a manual loading perspective, but it’s not what I’d call easy ergonomically. I hug the Scorpion D-50 with the same arm that manipulates the lever and then load rounds with the other hand. Loading is relatively quick, although, near the end, you’ll be loading one round per lever manipulation. It’s a thumb workout, to be sure.

I really love the window at the rear of the drum that allows you to monitor capacity. Unlike a side-mounted window, you can do a quick flick of the eyes to see how much you got left. It’s very clearly marked and keeps you keep track of your 9mm rounds as you deplete them.

Speaking of depleting ammo, I set forth to do just that. Drums are so much fun to shoot and in the Scorpion doubly so. I grabbed several hundred rounds, a pair of Scorpions, and went to the range. I love shooting Scorpions and PCCs in general. So I certainly enjoyed the process of emptying these drums more than I enjoyed filling them.

Getting Our Pow On with the CZ Scorpion Drum Magazine

I utilized a Scorpion Micro pistol and my Scorpion bullpup rifle and let the lead fly. I started with just a few basic drills to see if the drum did the very basics of being a drum. Next, I then set forth dropping the almost fully loaded drum from the gun and seeing what happened. On occasion, a round or two popped out, but nothing else seemed to happen. Oh, and the drum dropped free without issue.

Next, I wanted to apply pressure in various ways to see if I could make it fail. I used it first as a monopod of sorts and let the full weight of the weapon sit on the drum, and I pulled the trigger. No problems.

I used the drum as an improvised barrier stop and pressed the drum into the barrier, and fired. Again, no problem with reliability.

Lastly, I placed the drum over the top of a barrier and pulled rearward to change the pressure up, and again the gun and drum operated without issue.

From there, I got to do the fun stuff. I did various drills and just shot a lot out of the drum. Several hundred rounds over several days between a few different shooters. I dropped round after round and heard ding after ding. Whenever the drum ran empty, I dropped it from the gun to the ground to try and give it a little stress. The drum must’ve meditated prior because the Scorpion D-50 didn’t seem to mind stress.

The drum doesn’t affect Scorpions with a standard layout. Sure the gun gets a bit heavier, and using it with a single hand is rather difficult. The brace certainly helps stabilize the now heavier weapon. In the bullpup Scorpion, the drum feels somewhat awkward, and your arm has to wrap around its bulbous form. Yet it loads, ejects, and fires without issue in the bullpup gun.

All in all, the Scorpion D-50 drum is pretty fantastic.

The last pistol caliber subgun to wear a drum this well was the Tommy gun. In fact, the Scorpion quickly becomes a rather modern variant of the Tommy gun with a dream and certainly looks pretty freaking sweet. Luckily it works as good as it looks. Do you love it? Hate it? Let us know below! 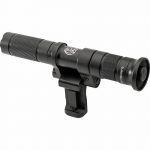 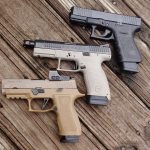