Allen from Olde English Outfitters is back with what looks to be a nice gun with an even nicer price tag. The Zigana PX9 is the latest from the Turkish gunmaker Tisas and it continues their combination of solid guns at entry level prices. They are usually based on proven designs, which doesn’t hurt.

When I first saw it, I was thinking Springfield XD, and Allen quickly notes that it looks like an XD but it’s not. Despite the XD-like frame, there’s no grip safety and the trigger safety blade is gone in favor of a smooth trigger face. The controls are similar, with a left side slide lock and reversible magazine release button. The PX9 does have an ambidextrous frame-mounted thumb safety, which Allen says is easily manipulated. The safety will not engage unless the gun is cocked, and it also locks the slide. Takedown is the same easy method as the XD.

Like the XD, the PX9 also has shallow front and rear cocking serrations and there is light checkering on the front of the trigger guard and the front of the grip. There is some texturing on the grip. Allen says he wouldn’t call it “slippery,” but it’s not very aggressive. The gun ships with two replacement backstraps and a tool to change them with. Allen likes the grip configuration as it allows a good trigger reach.

There is no loaded chamber indicator, but the back of the striker is painted red and protrudes from the back of the slide when the gun is cocked. There is a picatinny rail section forward of the trigger guard for accessories.

The gun shot well on the range with 100 percent reliability, and it was accurate. No word on how many rounds were fired or what loads.

The PX9 ships with some nice extras too. You get two metal 15-round magazines and a magazine loader. And the PX9 takes Sig P226 mags, so getting more won’t be an issue. The gun also comes with an adjustable cant polymer retention holster. The holster is equipped with a release tab manipulated by the middle finger as the gun is drawn. Looks like it might take a little practice to get used to, but it’s a nice inclusion.

Allen says he likes the PX9. He says it’s “very comfortable to shoot” and that he “wouldn’t have any qualms at all about taking it and using it for serious business.”

What do you think of Tisas guns? I had one (though not a PX9) and I liked it. Let us know in the comments. 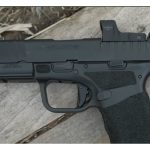 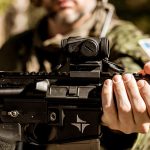